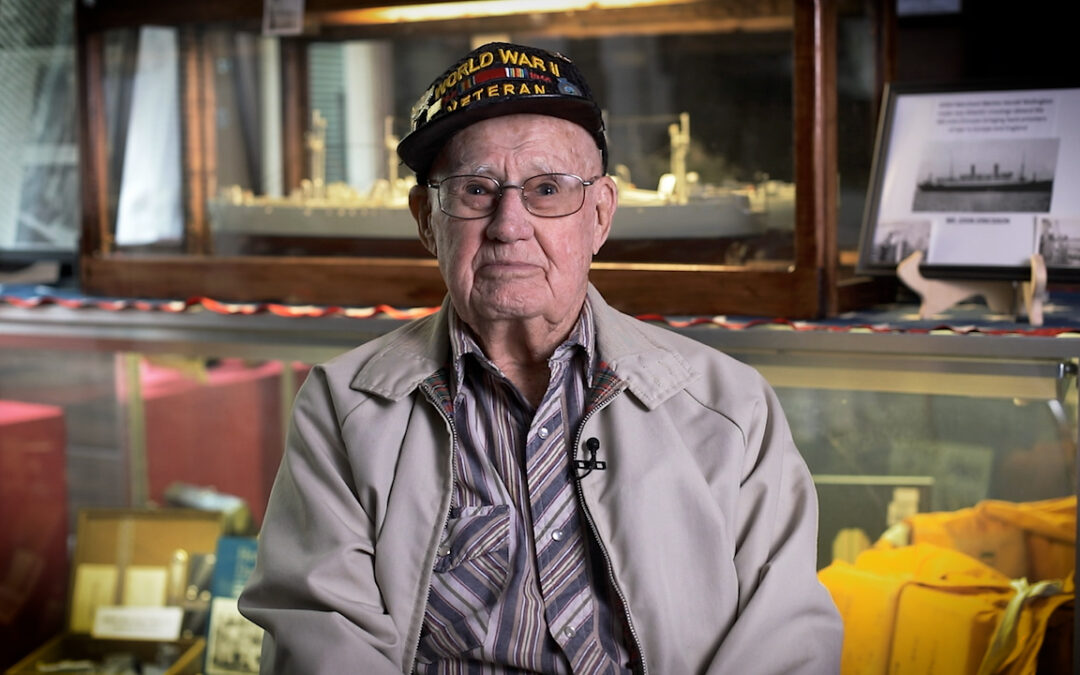 Brevard resident and World War II veteran Harold Wellington (pictured above) traveled to Baltimore for the 2020/21 American Merchant Marine Veteran Convention and Congressional Gold Medal celebration. This year, the convention is notable because the U.S. Government will recognize the Merchant Marines who fought during the Battle for the Atlantic of World War II as combat veterans. 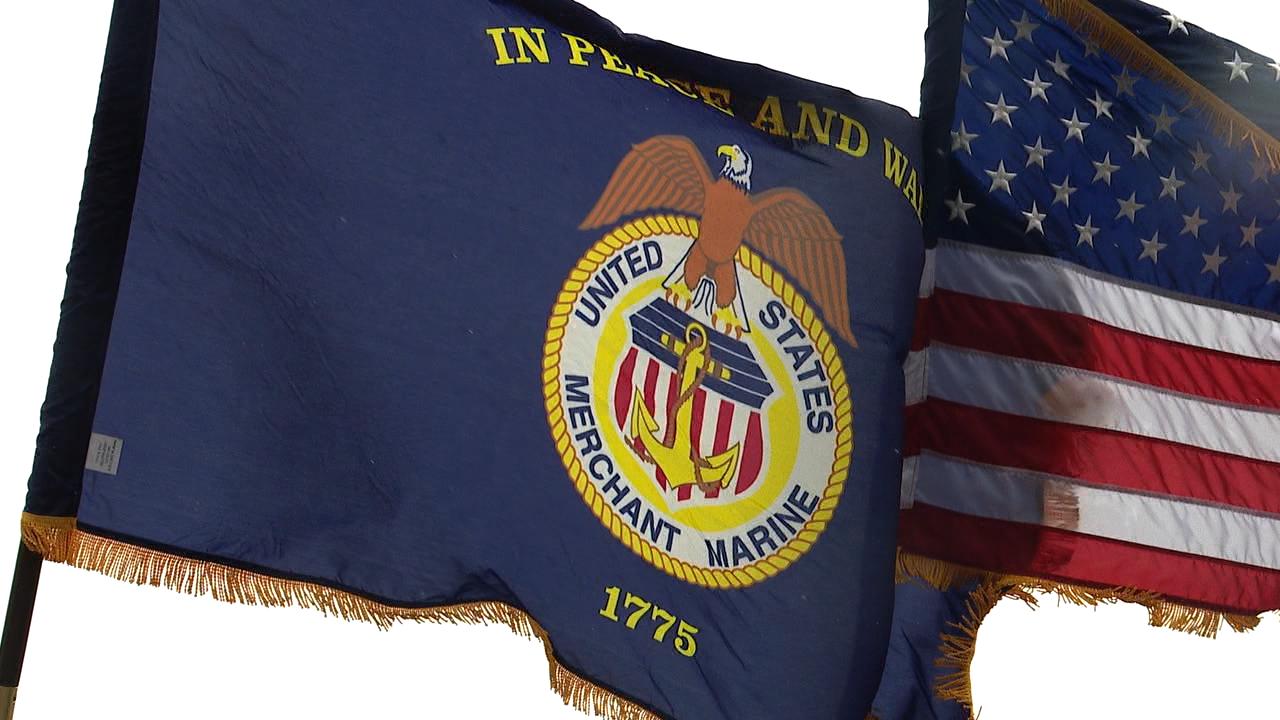 In 2019 Congress passed the Merchant Mariner Act.  The Merchant Mariner sailors were officially recognized for shipping supplies to the Allies while sailing defenseless against German submarines patrolling the Atlantic Ocean. President Donald J. Trump signed the Act into law in the spring of 2020.  The remaining living World War II Merchant Marines, like Harold Wellington, were supposed to be awarded the Congressional Gold Medal during the 2020 convention. The COVID 19 pandemic postponed the ceremony in the summer of 2020 and in November of 2020. Finally, the Merchant Marine Association organized this convention to honor these veterans with the Congressional Gold medal to these deserving veterans. 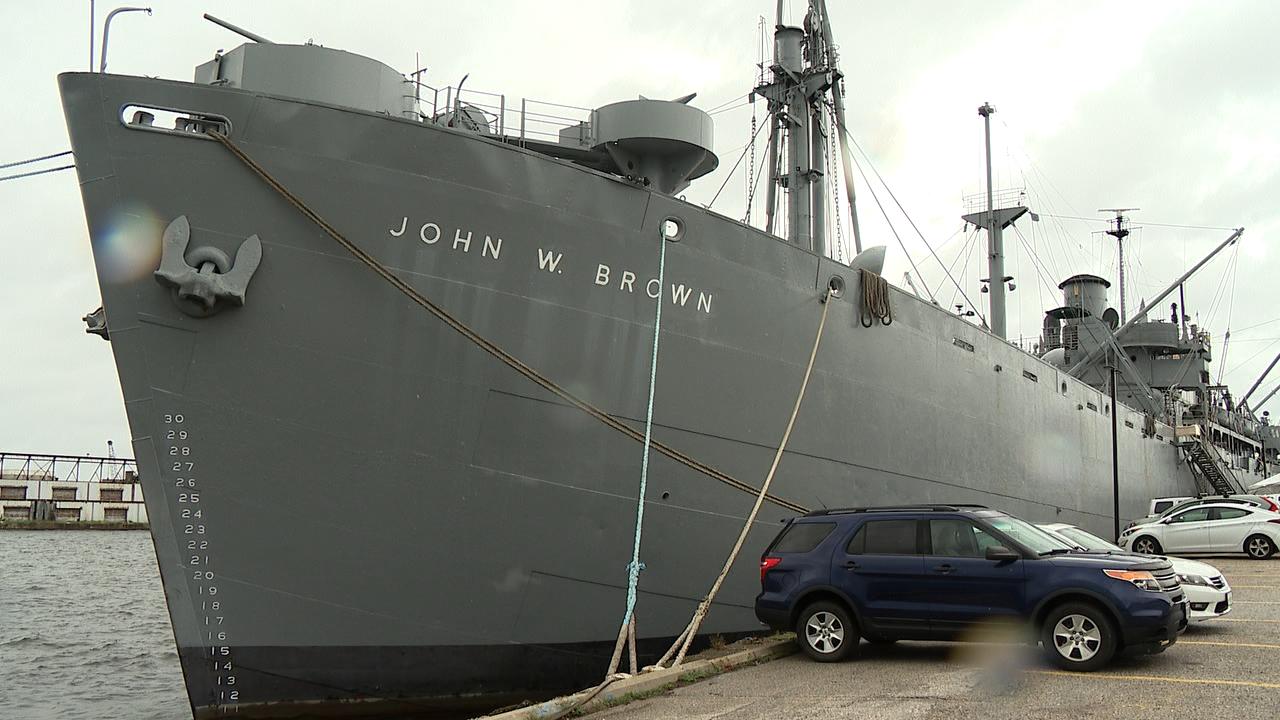 The attendees of the event visited the S.S. John W. Brown docked in the Port of Baltimore.  “Welcome aboard the John W. Brown, please watch your step,” A John Brown docent said as twenty-one WWII veterans, eleven of them over 100-years-old, climbed up the gangway and into the past.

The S.S. John Brown is one of only two remaining operational Liberty Ships that participated in World War II. The tour brought back memories for 94-year-old Edward Pascale.

“A lot of memories of being up at night, all night standing by the guns.  The submarines were out there and they were hunting, and we were chasing the submarines,” described Pascale.

These men faced an enemy hidden by the sea. They never knew when they were about to be ambushed.  Some of these men served in the engine room forty feet below the waterline. According to Brevard resident Harold Wellington, if a ship were to be hit by a torpedo, the water would pour in on top of the men in the engine room, and they would not get out. Standing in the boiler room of the John Brown, Wellington remembers his first time stepping foot on a Liberty Ship. His supervisor took him down into the engine room and left him there with no training.

“They brought me down here and said, ‘this is the boiler room you got the first watch,’ then turned and walked off,” said Wellington. “I have never seen this thing before. What in the hell do I do now?” 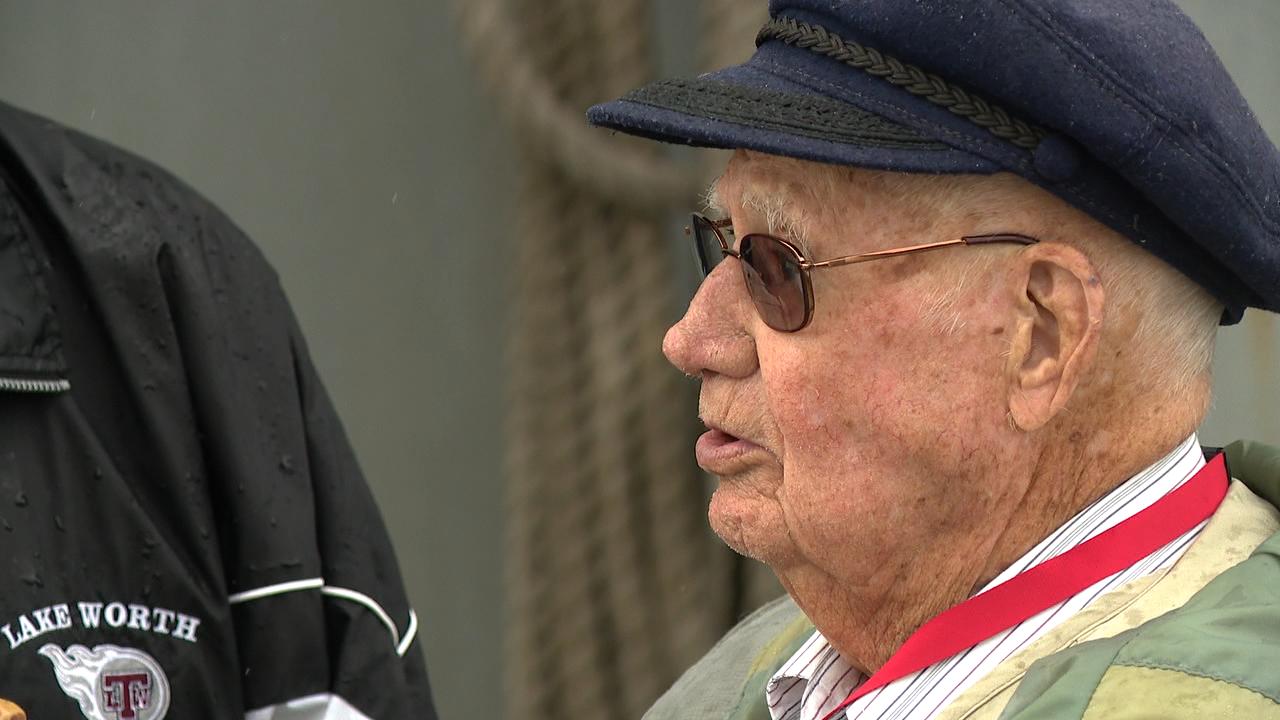 Being a Merchant Marine was a dangerous job in a war zone. The U.S. Government refused to acknowledge the Merchant Mariner as a combat veteran. WWII Merchant Mariner, Lee Cox, remembers how the other servicemen unfairly treated him. Cox said other military personal believed the merchant sailors were civilians instead of people serving their county.

Cox said, “We got insulted a lot during the war by the Army guys.” He went on to say that Navy guys would say, “Hey draft dodger drunks”.

Bill Balabanow also remembers his days in the Merchant Services during the war.  He believes the American public did not give the same recognition to the merchant sailors as other military branches.

“Our casualty rate was higher than any other branch in the Service,” said Balabanow. “People don’t know we were there during the invasions of all those islands in the Pacific.” 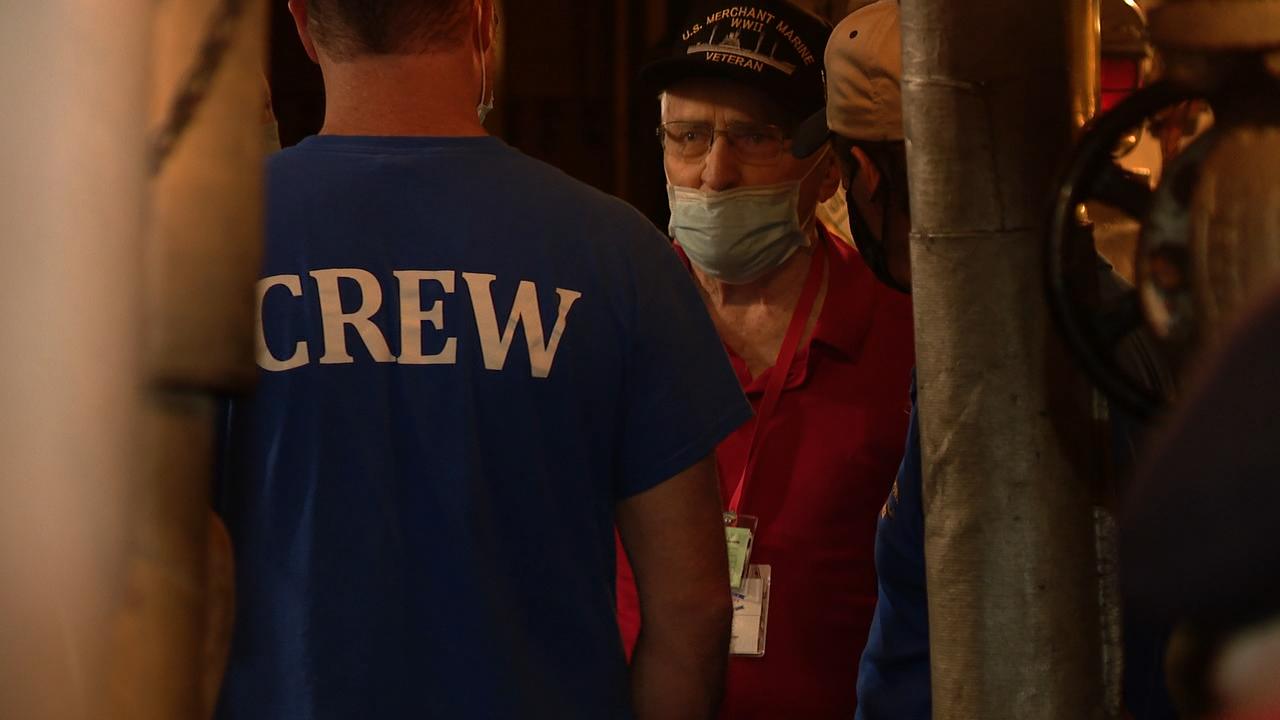 WWII Merchant Mariner Lee Cox in the engine room of the Liberty Ship SS John W. Brown during a tour.

At a gala dinner the last night of the convention, the U.S. Maritime Administrator unveiled the secret design for the Merchant Marine Congressional medal. Medal shortages caused by the Covid 19 Pandemic prevented the Maritime Administrator from awarding the gold medal to the veterans. The U.S. Mint will not publicly release the images on the medal until they make the awards. The attendees of the convention got a sneak peek at the drawings of the medal. The Maritime Administrator asked everyone in the room not to publish pictures of the drawing on social media and asked the press not to release any images on professional media outlets.

Veterans like 101-year-old Charles A. Mills say that it is about time that the government recognizes their combat service.

“No Army, Navy, Coast Guard, or Marine Corps can move without the U.S. Merchant Marine because we are the supplier,” Mills declared. “You can’t fight a war without a supplier.” 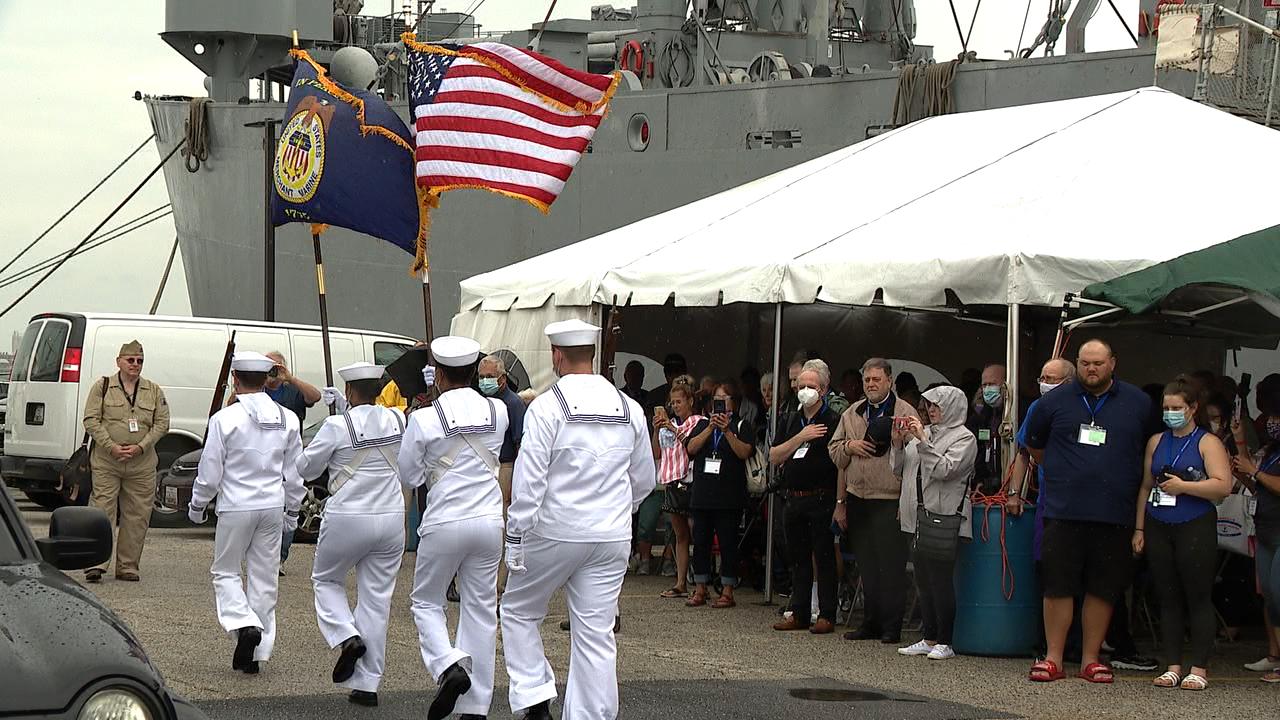