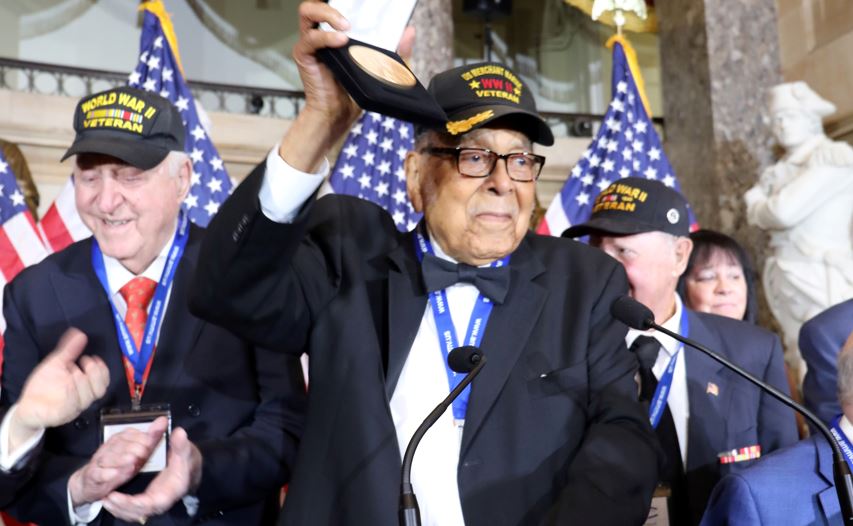 102-year-old Charlie Mills of Pearland, TX, holds up the Congressional Gold Medal at the U.S. Capitol. 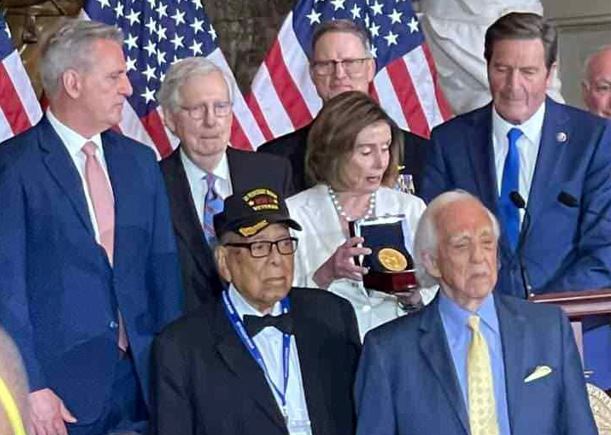 In 2020, Congress passed the Merchant Mariners of World War II Congressional Gold Medal Act to recognize the merchant mariners for their courage and contributions during the war.

“In World War II, U.S. Merchant Mariners and their shipmates of the U.S. Navy Armed Guard sailed in harm’s way to deliver what was needed to prevail not only across the Atlantic and Pacific but through the Indian Ocean, and across the Arctic Circle,” Rear Adm. Michael Wettlaufer, Commander, Military Sealift Command stated at the ceremony. “This Gold Medal recognition acknowledges the strategic advantage American mariners brought to the fight in linking domestic production and the fighting forces overseas.”

World War II-era Merchant Mariners crewed the nation’s Liberty Ships, which were used to transport critical war-time vehicles, weapons equipment, ordinance, and supplies to the European and Pacific Theaters. Many of the Merchant Mariners who served during World War II never came home as their ships were sunk by enemy forces while traveling to their overseas destinations.

“The price of victory was extraordinary,” declared Wettlaufer. “Of the 250,000 members of the American Merchant Marine who served our country during the war, 12,000 were wounded in action and over 9,000 perished at sea, including 142 cadets from the United States Merchant Marine Academy in King’s Point, New York, who were killed during the conflict. Their personal sacrifice was great and commitment to our nation’s freedom unparalleled.” 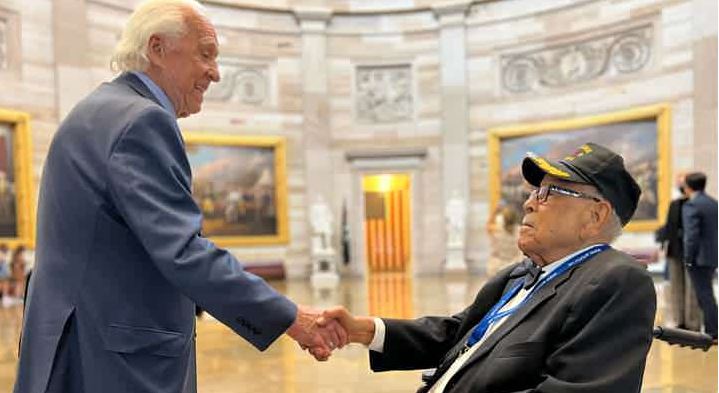 “I’m speaking for 248,500 guys that are already dead,” he told those who attended the ceremony. “One out of 26 of us died, but thousands of us came home deprived of a part of our life.”

“That’s probably one of the least-understood missions that ever was accomplished in modern warfare,” he said of the merchant mariners’ role in supporting the U.S. military.

Yoho urged those in attendance to share the story of the World War II Merchant Marines so that future generations can learn from their sacrifices and dedication.

“And, so, when you’re with others, say to them of what we did; urge them to read about us and find out about us,” Yoho stated. “Greet us today if you can [and] then say to those, ‘we gave up our yesterdays for your better tomorrow’.” 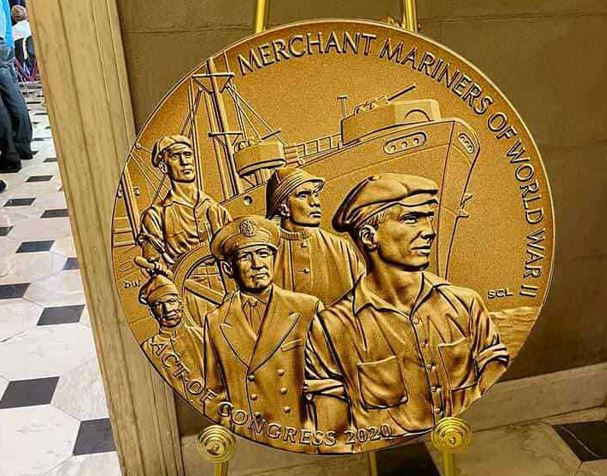 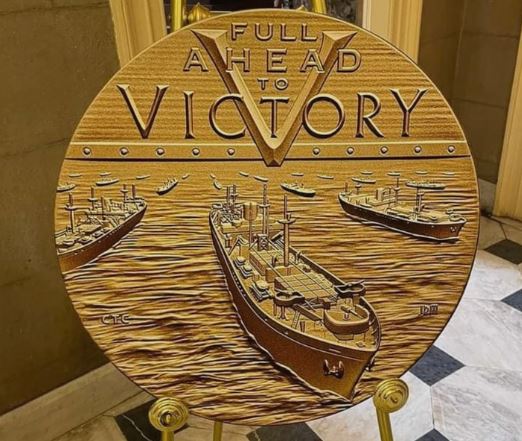 The Congressional Gold Medal is the highest expression of national appreciation which the U.S. Congress can bestow for distinguished achievements and contributions. Each medal honors a particular individual, institution, or event, according to the U.S. House of Representatives’ website.

Veterans Honored on Capitol Hill After Long Voyage for Recognition 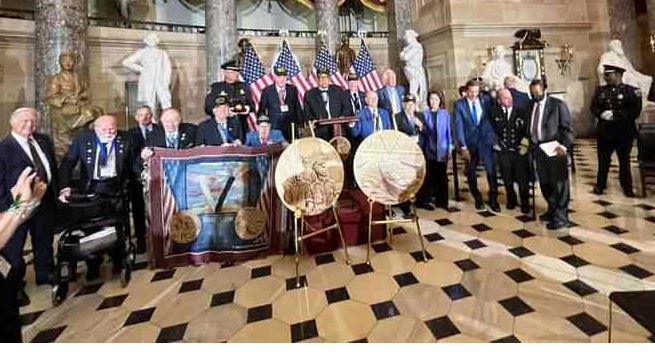 “The bravery demonstrated by the U.S. Merchant Mariners to keep Allied Forces supplied during World War II is second to none,” said Dru DiMattia, President of the American Merchant Marine Veterans. “In the face of targeted attacks by German submarines and U-boats, the unarmed Merchant Mariners met the moment with resilience and courage, and serve as an inspiration for all of American Maritime.” 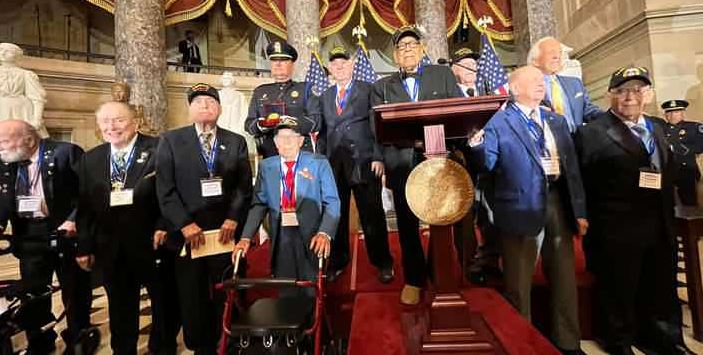 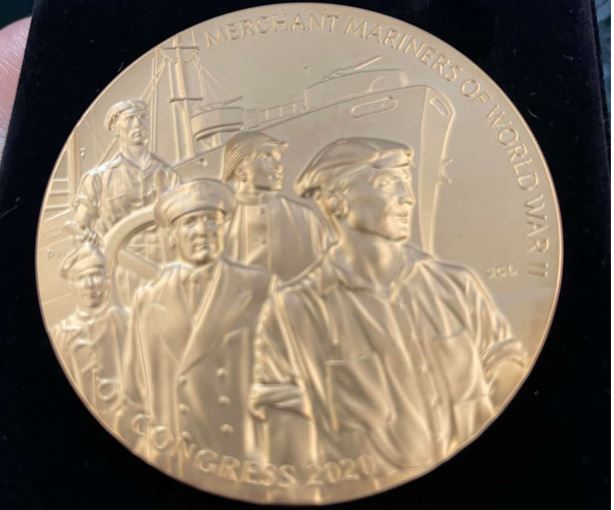