US Air Force Quilts of Valor 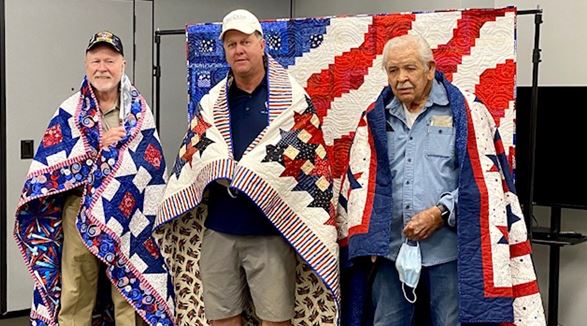 Jim Schenfield, Alex Ritchey and Chuck Gosnell (l-r above) served a combined 60 years in the US Air Force, each retiring as a Master Sergeant. Each was honored with handmade patriotic quilts from the quilters of Blue Ridge Quilts of Valor in Brevard on March 26, 2021.

Jim Schenfield served in the US Air Force, competing 20 years of service 1957-1977, attaining the rank of E7. After training at Lackland AFB and Shepherd AFB, he moved to Brookley AFB in Alabama and was assigned to an aeromedical transport squadron consisting of 5 C-131 aircraft. He moved on to Pope AFB in NC working as a flight mechanic on a C-123 cargo aircraft, part of a five-man crew.

In the fall of 1962, his squadron flew to Tan Son Nhut AB in Saigon, S. Vietnam. For the next 12 months, they were assigned to the 310th Troop Carrier Squadron transporting troops and supplies to army outposts as well as dropping flares at night throughout the country.

Returning to the states, Schenfield was assigned to the 11th Aeromedical Transport Squadron at Scott AFB in Illinois. Following this, he worked four years in the Military Assistance Advisory group squadron in Taipei, Taiwan. Many of the missions he flew on the C-47 and C-54 aircraft were classified, including providing transport for Henry Cabot Lodge Jr. who was then Ambassador to Taiwan.

In 1969, he was assigned to the 4950th test wing at Wright Patterson AFB in Dayton, Ohio (home of the USAF Museum.) He served as an aircraft quality control position in an F-4 fighter squadron un Osan AFB, South Korea, followed by a return to Wright-Patt. He completed flight engineer training in Texas, and went back to Ohio where he was one of two flight engineers on a C-121. They were responsible for just about everything other than flying the aircraft.

One of the C-123 aircraft he was associated with is nicknamed “Patches” for obvious reasons and is part of the Vietnam exhibit at the Air Force Museum. He received many awards and ribbons throughout his service and retired as a Master Sergeant in 1977.

His quilt was made and bound by Bonnie Cunningham, quilted by Carole Carter.

Air Force veteran Alex Richey was discharged with the rank of E7, having served from 1984-2004. His basic training was at Lackland AFB in Texas after which he attended technical school as a helicopter mechanic.

Alex’s duty stations include Minot AFB in N. Dakota, repairing all systems and performing flight crew duties during TDY assignments in other stateside locations. After two years, he cross-trained into large aircraft repair, like the K-135 tankers and B-52 bombers. He performed a myriad of duties in support of the Cold War, which included alert duty on the nuclear alert pads.

He was later stationed at Osan AB in S. Korea, and Shaw AFB in SC. He deployed to numerous locations stateside and overseas in support of SW Asian operations which included Alaska, Guam, Hawaii, Saudi Arabia, Kuwait, Aviano AB in Italy, and Bandirma, Turkey, as well as classified locations in Cairo, Egypt, Qatar, and the United Arab Emirates.

He was then deployed in 1990 at the onset of Operation Desert Storm, to King Khalid AB in Saudi. Here he performed flight line expeditor duties under hazardous and combat conditions for 7 months. Other duty stations followed in SW Asia until his promotion to E6 at which time he was recruited to quality assurance evaluator for his helicopter squadron.

His 12 year old daughter was diagnosed with cancer in 1996 and he was able to relocate to Shaw AFB in SC in 1997 as a logistics manager at the Air Force US Central Command. His job was managing logistics for the entire SW Asian theater. This was followed in 1999 to an assignment in S. Korea at Osan AB, where he managed logistic issues for special operations helicopter unit supporting classified operations in SE Asia.

Richey returned to South Carolina where he served the remainder of his military career. He retired as a Master Sergeant in 12/2004 and was sought out by contractors and the Defense Logistics Agency. He worked as a civilian for the next 8.5 years at both Shaw AFB and Madill AFB in FL, home of the US Central Command.

His quilt was made and is presented by Lois P. Davis.

Charles Gosnell served in the US Air Force from 1958-1978, most of it during the Vietnam era. His duty stations beginning in 1959 included Japan, Shaw AFB in S. Carolina, the island of Majorca off the coast of Spain, Duluth, MN, The Republic of Vietnam near DaNang, 1968-69, Gunter AFB in Alabama, Tyndall AFB in Florida, Aurora, Colorado, S. Korea in 1973-74, Luke AFB in Arizona and back to Tyndall in Florida.

While stationed in Vietnam, his duties included giving radar control to fighter/bomber aircraft to complete their missions over N. Vietnam, following by guidance to the tanker aircraft to refuel them for the return trip.

At Tyndall AFB, he served as an instructor in radar operations, including classroom instruction and student performance on position assisting in intercept mission. He worked in training operations at Gunter AFB and Luke AFB and received numerous awards and ribbons for his service.

His quilt was made by the Connestee Quilts, bound by Patti Stevens and quilted by Peggy McCaffrey.