Three WWII Centenarians and a Youngster 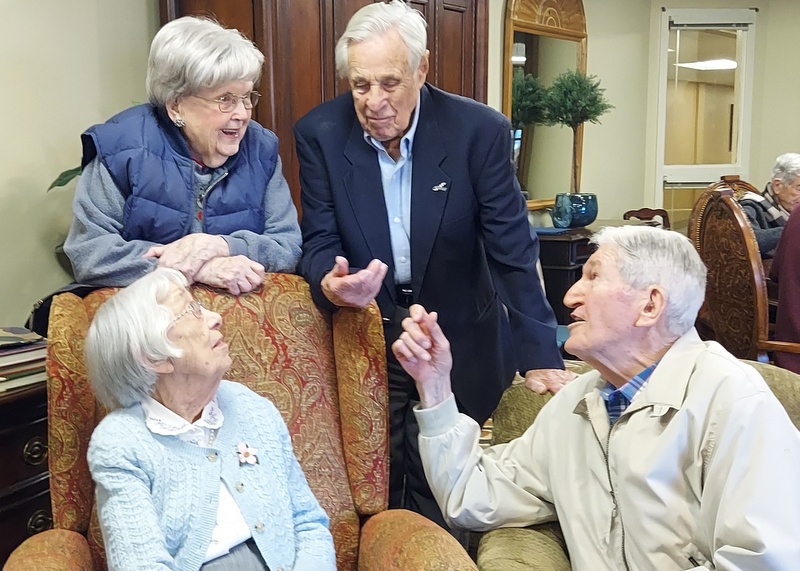 Friends, family, and volunteers from the Veterans History Museum of the Carolinas and Blue Ridge Quilts of Valor gathered to celebrate the birthdays and long, healthy lives of four WWII veterans. The occasion was the (January 5) 100th birthday of US Army Nurse Dorothy Managan. She was joined by WWII US Army Physical Therapist Myrl Jean Hughes, who had turned 100 just four days earlier—on January 1. Two of their “greatest generation” friends attended the festivities: USAF Lt. Colonel (Ret.) Ed Cottrell, a former P-47 fighter pilot who will be 101 years of age on January 17, and US Navy D-Day veteran George Sarros, the youngster of the foursome at age 97.

Dorothy Managan’s job near the end of the war in the Pacific was at an Army hospital in Ft. Lewis in Washington state, nursing and training other nurses to take care of American soldiers coming home from Japanese prison camps, some having been starved and tortured for years. She said, “We gave them TLC and care until they were strong enough to be transferred to hospitals nearer to their families all over America.” She continued her nursing career after the war. For the last several decades in retirement, Managan continues to visit neighbors who are ill, still “making her rounds.” Asked what her earliest memory is, she quickly replied, “Shooting marbles in the driveway with my brother.”

Myrl Jean Hughes provided physical therapy to service members in the Philippines and New Guinea, helping them get strong enough to go back to the battlefields. Describing what her hospital in the Philippines was like, she remembered, “It was kind of a M.A.S.H. set-up, not a lot of military protocols. I remember watching a movie shown by the USO, and a large American flag appeared on the screen. I hadn’t seen our flag in a long time. I realized how much I missed it. Tears welled in my eyes.” On a lighter note, she told about one soldier whose leg injury required it be constantly be packed with ice. “He was the most popular patient there. All the others brought their beer to chill next to his leg.” Recently over lunch, she said, “I’ve never liked vegetables, so I don’t eat them. People say, “You should eat vegetables.” With a coy smile, she said, “I tell them, ‘I’m a hundred. You really can’t make that argument with me.’”

P-47 fighter pilot Ed Cottrell will 101 years of age on January 17, 2023. He celebrated his 100th birthday by jumping out of an airplane (tandem) from 14,000 feet. It is hard for his friends to keep up with him. He has made three trips “back to the battlefields” in Europe where he took off and landed his plane during the Battle of the Bulge. With an excited look, he reported, “I’m going to Austria this spring—to Berchtesgaden—to Hitler’s Eagle’s Nest Hideaway. The mayor of Vienna invited me. Cottrell tells the story of having his engine shot by a German ME-109 while flying over Germany. Though his windshield was covered with oil and he had no radar to get him back to home turf, he managed to fly his plane to Allied soil and land it. He said, “I kissed the ground.”

Navy motor machinist George Sarros worked in the engine room on LST 515, making its first landing on the beach of Normandy around 1:00 PM on June 6, 1944. He said, “They opened the doors and out came tanks, troops, and ambulances. My job during combat was to man a 40 mm anti-aircraft gun. We looked up and a German plane was right above us. I knew that was the end. But then I saw our P-47 come down and shoot him right out of the sky. That pilot saved us.” LST 515 made 65 crossings of the English Channel, loading ambulances full of our wounded soldiers and paratroops back into the ship and taking them to hospitals in England. Sarros, who joined the Navy at age 18, said, “We were just kids. But we did what we needed to do. Back then, everyone did.” Sarro plans to make his second trip to Normandy for the commemoration of the D-Day invasion this June.

All four of these veterans have received handmade patriotic quilts from Blue Ridge Quilts of Valor volunteers, and the WWII stories of all four have been published by the Veterans History Museum of the Carolinas in the “We Shall Come Home Victorious.”, available on Amazon.
To nominate a veteran for a Quilt of Valor, please visit www.quiltsofvalorfoundation.com

Throughout the year, these and several other WWII veterans participate in events at the Veterans History Museum of the Carolinas—book-signings, Veterans Day Ceremony, movie premiere, and informal story-telling with scout troops and students. For information on their stories during WWII or to receive the free e-newsletter announcing public events honoring these heroes, email janisallen@janisallen.com. 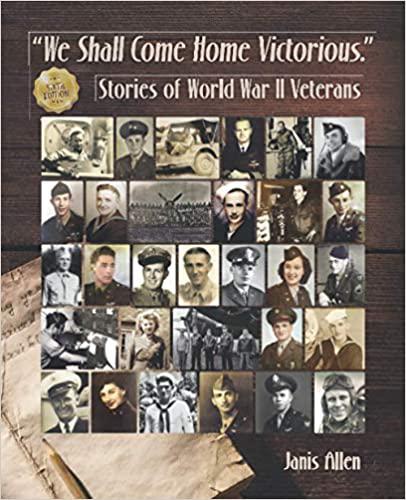 The Veterans History Museum of the Carolinas, is now closed for winter inventory and refreshing of exhibits. It will re-open for 2023 on March 2, when normal open hours resume: Tuesday-Saturday from 11am to 3pm.