They call you Doc 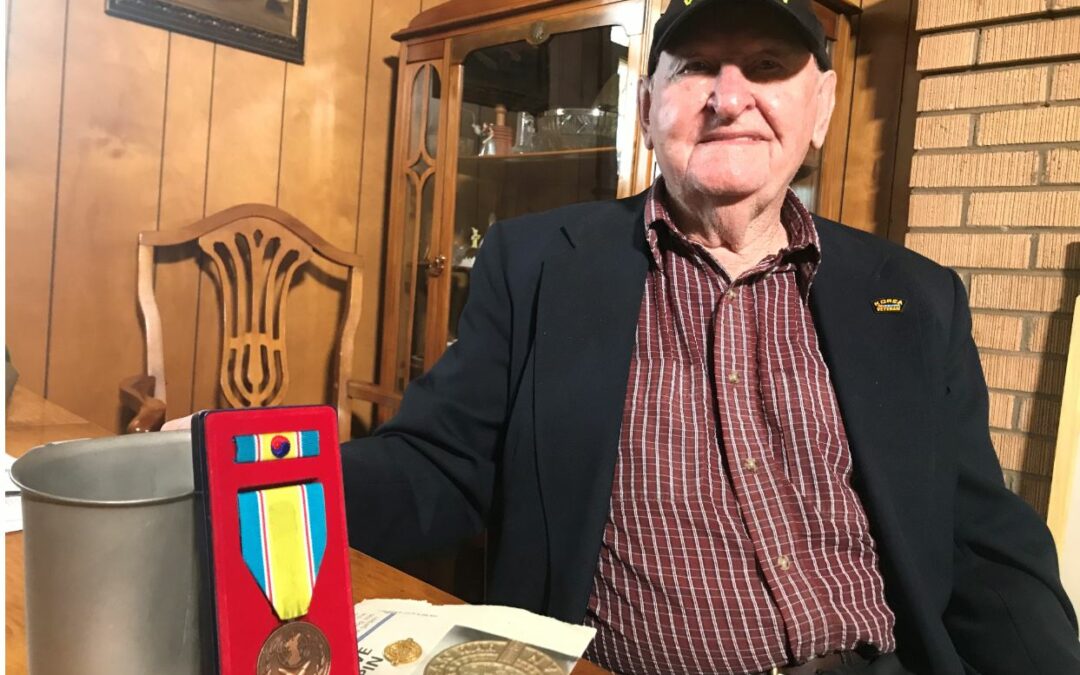 Thomas Greenway tells his story from his home near Columbus, North Carolina.

“They call you ‘Doc’ on the
front line.”

“This is part of my great-grandfather’s place right here. I worked about a year in Community Cash store in Spartanburg. I was just out of high school in ’49. I joined the Air Force to keep out of the Army, but they froze enlistment.

“I was supposed to go on a Monday. They called and said they was people sleeping in pup tents out in Texas, so I just went back to work for another six months. Got a letter from Harry [Truman], he said, ‘Are you ready to go to Korea?’

“June 19, 1951, I was drafted into the Army. I was still waiting to be called into the Air Force. I went down to Fort Jackson along with my friends Bryant and Womack from Rutherfordton. They were both medics. Bryant was killed in Korea and received the Medal of Honor. They had a bridge in Korea named after him.”

Medics and a Barefoot Hitchhiker

“We went to Fort Meade, Maryland and got medical training. “I bought a ’46 Ford convertible while I was at Fort Meade. I’d charge five or six fellas ten dollars apiece to drive home from Fort Meade. One time, Bryant told me, ‘I won’t be riding with you this week.’ My wife came by with the car. She was staying with her sister out in Baltimore. She came by and picked us up. Bryant said, ‘You got room for me?’ I said, ‘We got six in this car, three in each seat. If it will help you, I’ll take your duffel bag.’

He raised the trunk and said, ‘Let me put these boots in that duffel bag and I’ll run back and get my shoes.’ He’d forgot he already had everything packed and his shoes were in his duffel bag. We left. So he hitchhiked barefoot. They stopped in Salisbury, North Carolina, and he went to a store to buy some shoes. He had great big feet. They said it looked like plow shoes.

“We’d get caught sometimes. He said, ‘How fast was you going?’ The man that was driving said, ‘Fifty-five. We was going home on a weekend pass.’ The patrolman said, ‘I want you to get home. I’m going to say you’re going to a funeral.’

“Bryant went straight to Korea as a front-line medic. I went to Fort Sam Houston and took a medical technician course. By the first of 1952, I was on the way to Korea.” 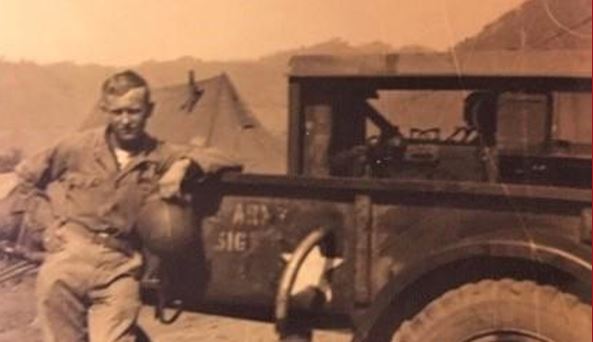 “One funny thing that happened—they put you on KP for 12 or 15 hours. They take your dog tag and give it back to you after KP. I found a bunch of dog tags. When they’d ask me for my dog tag, I’d give ‘em one them.

“I got on the ship and it was 18 days to Japan and another three days to Incheon, Korea. They didn’t have a gangplank, they had something like a cattle chute. They backed up to the shore and let us off. I went to Yong-Dong Po near the Hahn River—45th Replacement Center.”

On the Front Line in Korea

“I went to hospital which was a bombed-out schoolhouse. I thought I had it made—I was supposed to be stationed there permanently. After about two months, they started needing front-line medics.

“I didn’t wear glasses or anything; I was what they call a 1A profile and I was trained to go through tunnels and everything, going to the front line as a front-line medic.

“I’d go out on patrol with 12 infantry men. These same men in the States who called you pedal-pusher or bedpan commander or something like that. Over in Korea on the front-line, they’d call you ‘Doc.'” 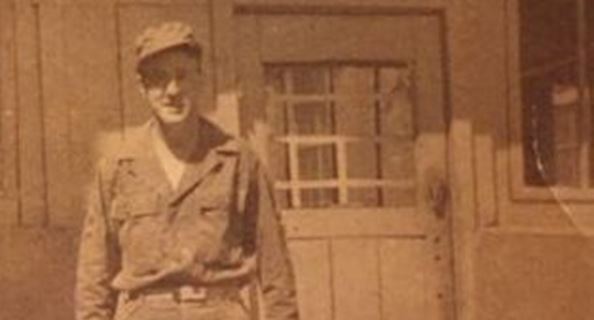 Above, ward master at evacuation hospital 121

Setting Up the 38th Parallel

“I went out on patrol two or three times. You could hear North Korean soldiers talking. By then we’d got the white uniforms and you could lay down in the snow and just look like a wad of snow. About the last of 1952, they set up that 38th parallel. Didn’t have cell phones. They had those field phones where you’d pull the wire out from a spool.

“The last few times, we’d pull that wire and wrap it around a fence post or something. You were supposed to go a mile into no-man’s land. We’d just go about 75 yards and just lay out there in the snow. We were listening for the North Koreans. Sometimes they played a recording to make is sound like they were walking around. We never did have any opposition after the 38th parallel.” 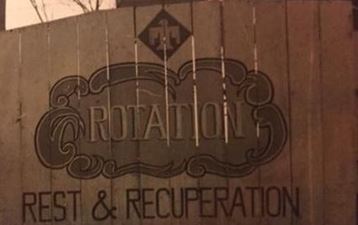 “In January of 1953, I went to Japan on R&R. A man said there was three places we could go: Tokyo, Osaka, or Kakura, said, ‘It don’t make any difference to me—just to get away from this place. Either one of them will be fine.’ I went to Kakura.

So seven days later, we got back to Seoul and found out the plane that was going to Tokyo had crashed and everyone was killed. There was a lieutenant out on the platform waiting for us with pens and papers. He told us to write home to let our families know we were all right. I had called my wife on the phone [so she already knew I was OK]. You could talk on the phone for three minutes for $10.00. I had got on a rickshaw and gone to make that phone call.”

“The bunkers were made with pine logs with sandbags on the sides and top. I went back on duty for about a month after that and moved back behind the lines and lived in a tent. That was the last time we was on the front line. I had enough points to come home. A boy about six foot tall came and told me, ‘Your name and mine are on the list to rotate back.’ I lifted him off the ground like he was easy to lift.

“After that I went back into the mail room to tell them where to send my mail. I seen a package on the floor that said Donald R. Gilbert. I said, ‘I know that name. I know his mother and first cousin.’ He was a regimental surgeon in the 45th division. He had an office in Green Creek, North Carolina. He was my dad’s second cousin.”

“About lunchtime he called me and said, ‘You’ll be eating with us tonight.’ I said, ‘I don’t know about a corporal eating with a captain.’ We had meat loaf. He told me, ‘If you’ll stay over here, I’ll have you looking like a zebra, stripes on your sleeve.’ I said, ‘Stripes won’t look too good on a civilian shirt.’

“He said, ‘When you get home, tell my grandmother and grandfather and Uncle Charlie and Aunt Liz—tell them I’m all right.’ They lived right across the road from me. He [Dr. Gilbert] was from Virginia, went to school and made a surgeon. He came to Columbus, North Carolina, and was a kidney specialist. I had kidney stones and went to him.”

“I went home on the ship General Nelson Walker, a great big ship they carried the presidents on. We got on a plane from San Francisco. After about five or six hours we landed in Columbia, South Carolina. The next day was Saturday and they told us we could have a pass to go 50 miles from the base, Fort Jackson. My son, Brad, had been born while I was in Korea. A bunch of us put another zero on that 50 miles to make it 500 and came all the way up here to Polk County. We caught a taxi to Spartanburg and then hitchhiked home.

“My dad took me back to Fort Jackson on Wednesday and I got discharged. They had a line for mustering out, which was about $300.00, I think. They told us, ‘Now there’ll be a man at the end of the line asking you if you want to re-up. Just say no gently and softly. Don’t be hollering the H-word.’

“My wife was Ruth Turner. We both graduated from Green Creek High School. She was a senior in high school. We both had to lie about our ages when we got married. It wasn’t supposed to last but six months, but it lasted, be 70 years in June. We married June 11, 1951.” 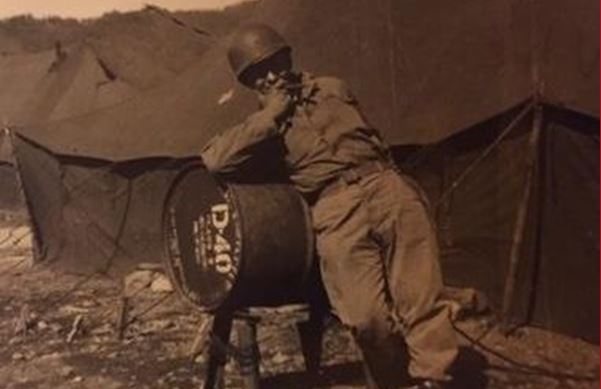 Life After the Army

After I got out of the Army, I went back to the Community Cash grocery store. Then I worked at A&P in Tryon, North Carolina, eight hours less work and closer home. Then I went to Firestone in Spartanburg and worked as a timekeeper for 30 years. They had just moved their plant form Akron, Ohio to Spartanburg—about 500 people worked there. They made truck grills, frames that go inside TVs, and lawn mower frames.

“I wasn’t planning on staying there long because I was pouring concrete on my own. They told me, ‘We’re going to put you in the time office, working in the supply room.’ I said, ‘I don’t know about that.’ The big man over the whole plant said, ‘You’ll make a lot of mistakes but nobody’s going to say nothing about it till you’re good enough.’ It was keeping up with downtime and uptime for 50-75 men, and percentage and all that.

“After about three weeks in there I decided I was going to look for something else. I went out to lunch one night and came back in. The head man came in and said, ‘Tom, how do you like the job in the time office?’ I said, ‘I don’t. I’m going to be looking for something else.’ He said, ‘We have confidence in you. Why don’t you have some in yourself?’

“I went back in there and I got to thinking after about 30 minutes, ‘That man’s trying to help me.’ I said ‘I’m going to stay here and be the best timekeeper they ever had.’ They had a big turnover in there. I stayed in there till I retired. And they called me back four times after I retired.” 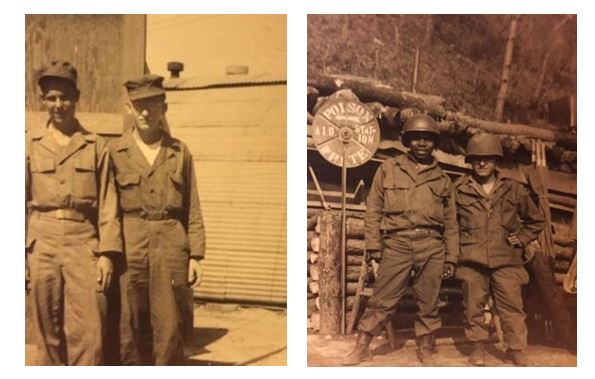