The Last of the Band of Brothers 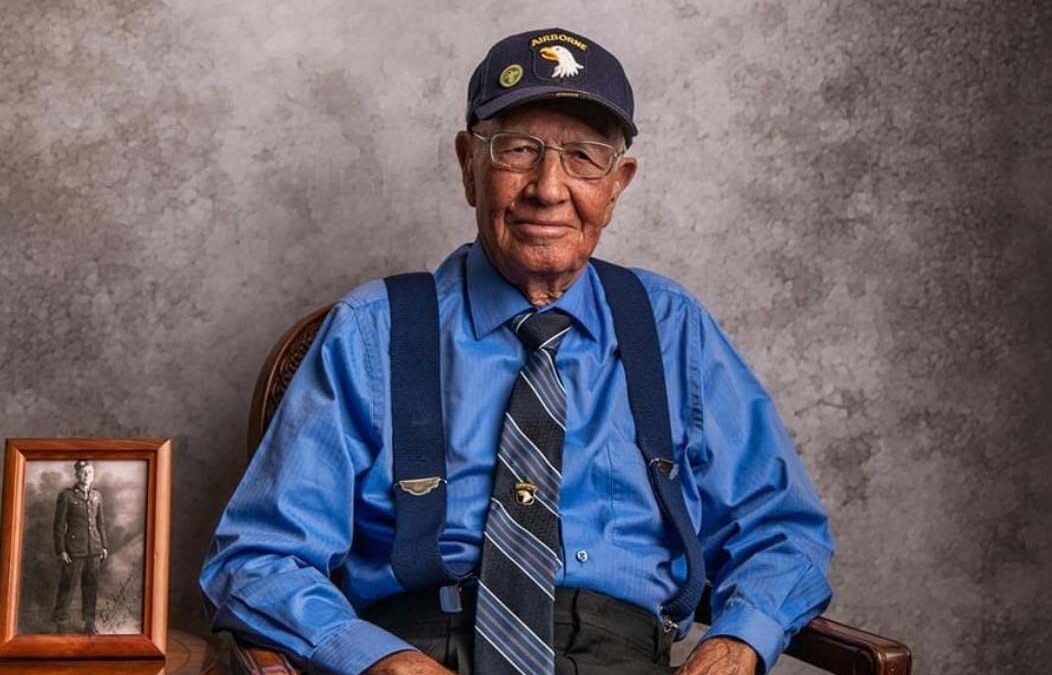 Bradford C. Freeman of Caledonia, Mississippi, passed away this week.
He was the only living member of the
“Band of Brothers” 101st Airborne Division, WWII.

July 4, 2020: Soon after being honored on a visit to New Orleans’ National World War II Museum, Mr. Bradford Freeman unfortunately became ill and passed away in his Mississippi home. He lived alone but had family and close friends close by, who visited him frequently. He was called “Mr. Brad.”

Here is the story Bradford Freeman told me in March 2021. Until this week, Freeman was the last surviving member of the Band of Brothers.

“I was one of eight children. We grew up working on our daddy’s rented 410-acre farm near Artesia, Mississippi, black land. We grew cotton, corn, hay, and cattle, and operated a dairy farm. I was an 18-year-old freshman at Mississippi State studying agriculture when I was told that if I joined the Army I could avoid being drafted. They let me finish out that year.”

Brad and his brother had always wanted to become paratroopers, so they both joined up.”I entered the U.S. Army on December 19, 1942. My brother was sent to the Pacific.

“After training at Camp McClellan, Alabama, Camp Shelby, Mississippi and Camp McCall, North Carolina, I was sent to England to join the 101st Airborne (who were already there): E (“Easy”) Company, 506th Parachute Infantry Regiment. [This is the unit portrayed in the 2001 movie “Band of Brothers.” ]

“We were at a camp in Alderborne, in southern England on June 5, 1944. They had us under guard until they told us when we would go. We were supposed to jump the 5th of June, but it was raining and they cancelled it.”

“We jumped at midnight on June 6. We were one of the first three planes. I was in the mortar squad. My job was to carry the base plate of the mortar. Sgt. Malarkey was my squad leader. He carried the other part. We were on maps. I set the sights. We had three other boys who carried the ammunition.”

“I landed in a pasture.”

“I landed in a pasture where there were beautiful white-faced cows. I was told that when I got there I was supposed to stay right where I was and wait till I got somebody else with me. I saw a man come down. He was my buddy, Lewis, from Atlanta, Georgia, and he had broken his leg. I helped him into the bushes and I took his things and put them in the woods. We were supposed to help a fella if we could, and then go, because we had something else to do. We had to get the big guns. I went on and joined some other boys and we gathered at a place. We were popping our little crickets to keep from shooting each other or getting shot at.”

“We had to take the place and get the big guns so they couldn’t interfere with the soldiers who were coming ashore at Normandy. We scattered pit and set up. We were taking roads and bridges. They had told us that if we saw an enemy truck coming down the road, to shoot the driver. We happened to be fortunate enough to do it right, I reckon. We secured the area and let the Army go through. They had come ashore and now they got on with their business.”

“A week or so later, General Eisenhower wanted us to take a beach town on a peninsula in France that the Germans occupied. It was a place where landing would be a lot easier than landing on the beaches. It was surrounded by water. There was no way to get to it but a concrete bridge—one way in, same way out. We were firing mortars into that town. We finally took the town.”

“We went back to England and did more jumps. We were loaned to the British Army. We jumped for them in Holland on September 17, 1944 [Operation Market Garden]. The Germans came right on down the river and blew the bridge, so we had to turn around and go back. We saw the Dutch people taking girls who had associated with the Germans and cutting their hair off. We laughed at that.”

“We’re from the United States of America, we’re going to do whatever we want to.”

“We went to Bastogne when German tanks came through. When a German plane came over, we would stop and stand still like a fence post. We heard the Americans were losing and giving up and that was a sad thing for us. We were told to run, but we took off after the Germans. One of our fellas, a short, little guy about five feet, “Babe” Heffron, told them, ‘We’re from the United States of America, we’re going to do whatever we want to.’”

“When the Germans found out we were the 101st, they stopped.”

“Then there was more shooting. We tried to get out of the way and took cover between two dead mules. They was froze solid and boy, they were cold! That was all the mules I seen in all of Europe. A Jeep picked us up and took us to town.”

“You take care of the other boy first.”

“Another fella, Ed Joint, got shot in the arm. The medic came and started cutting my britcha-leg. I told him, ‘You take care of the other boy first. I’m not hurt.’ But I was. The medic couldn’t do anything for the leader in my leg, so they flew me to England, where I stayed for three months before they could get the leader to grow back to where it would stay. I got back into the fighting. Now, I can walk on two feet.”

“Some of us were assigned to load horses into train cars. Every other car had horses and the cars between them had displaced persons. We rode on the ends of the car as guards. We got off at one of the stops and didn’t go all the way, so I don’t know where they ended up. They sent a truck to pick us up.”

The War Was Over 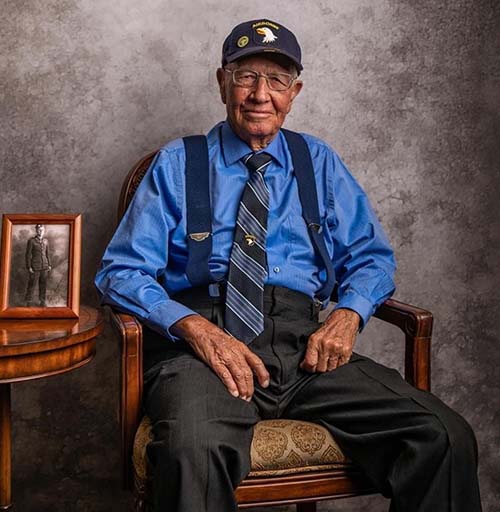 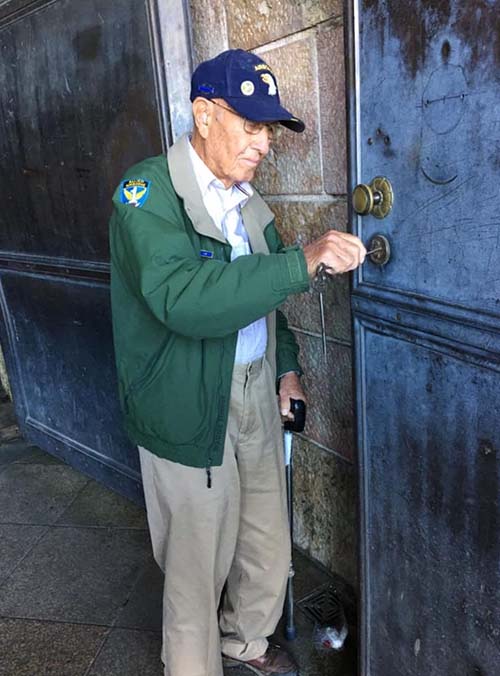 Freeman revisits Hitler’s Eagle’s Nest hideaway in Berchtesgaden, Germany. He was guarding a bridge near Eagle’s Nest on the day the Germans surrendered in Reims, France. 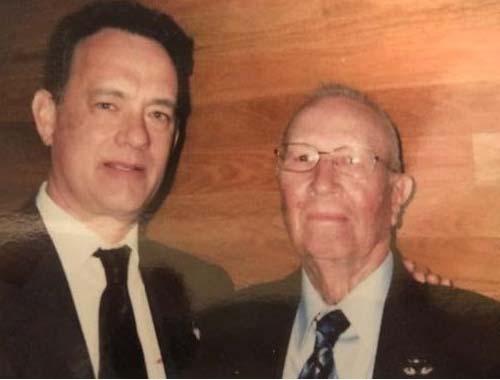 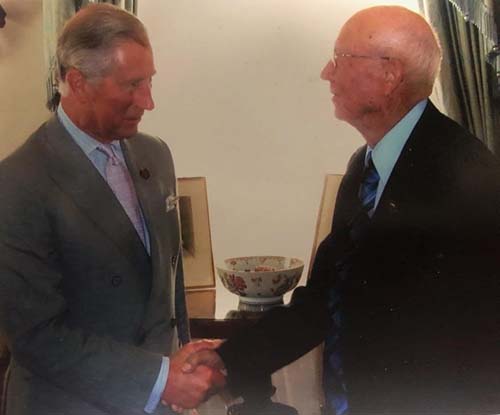 The United Kingdom’s Prince Charles shakes the hand of Bradford Freeman in London. 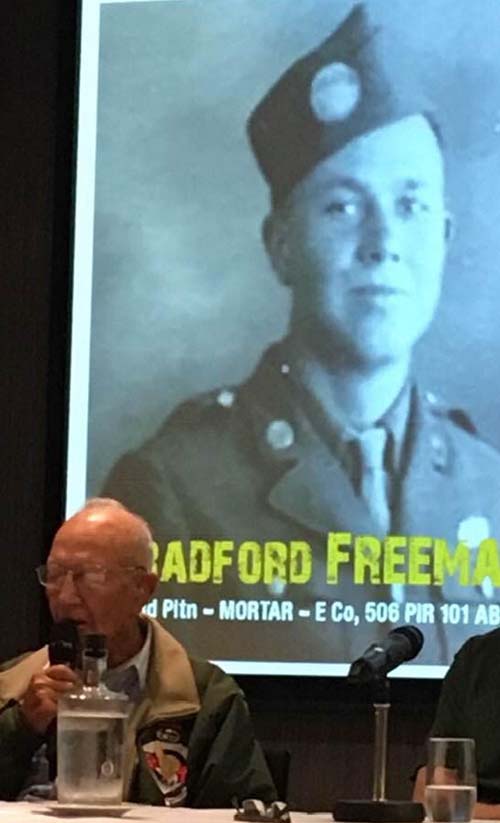 Freeman often spoke to groups about his service in the 101st Airborne.

We were trained for it and we went there to do it . . .
and I had packed my own chute.”

When Mr. Brad was thanked in 2021 for what he did to save our civilization from Naziism, he said, “I was glad to do it and was glad I could do it.”

In recent years, many groups came to Mr. Brad’s home to hold ceremonies with color guards, flags, awards, and speeches, to honor him for his service with the 101st Airborne.

He said, “I would sit on my porch while they paraded by. I was thrilled with the displays of American flags and banners they put in my yard.” In my last phone conversation with him earlier this year, he told me he’d just been outside feeding his chickens.

Freeman often spoke to groups about his service in the 101st Airborne.

Individuals wrote letters asking for his autograph. Many people called, asking him to him tell his story. Others emailed or called his friend, Ms. Joanne Gunn, who helped schedule phone interviews with people from far away.

In 2019, a sixteen-year-old student from Ontario, Canada, Jaxon Hekkenberg, read Freeman’s story in this newsletter and asked for help arranging a phone call. Mr. Brad told his story to Hekkenberg, whose goal is to create a YouTube channel of the stories he’s collected from WWII veterans.

Mr. Brad was a hero whom we were fortunate to know. His story will live on with its sharing by young people like Jaxon, and all of us who are grateful for the courage of the Band of Brothers and so many more who won the war.