The Highest French Honor Comes to D-Day Veteran in Brevard 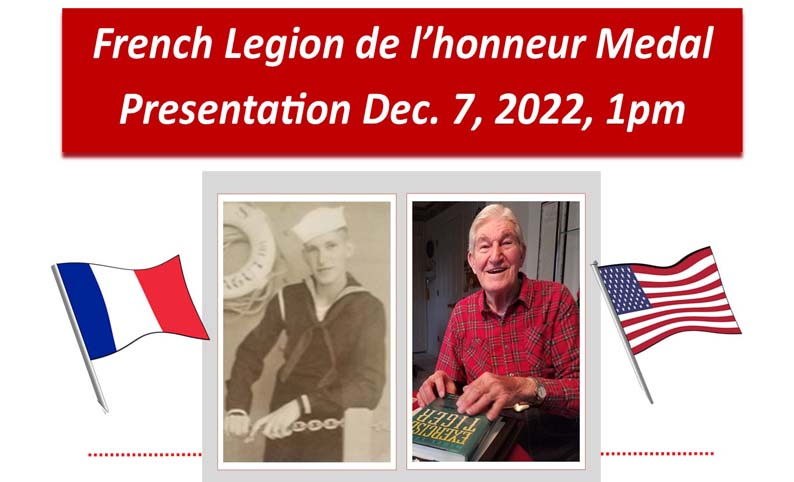 On December 7, U.S. Navy D-Day Veteran George Sarros will be given the French Légion d’honneur Medal by Consul General of France, Anne-Laure Dèsjonqueres. This is the highest merit bestowed by the French government “based on exemplary services rendered to France.” 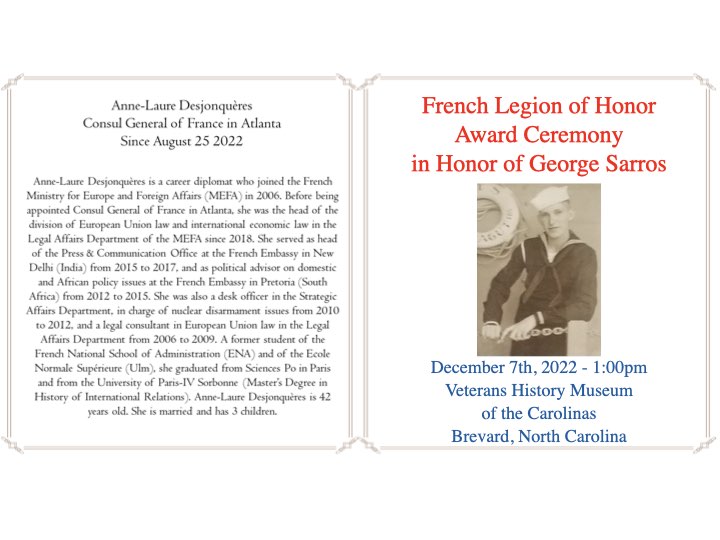 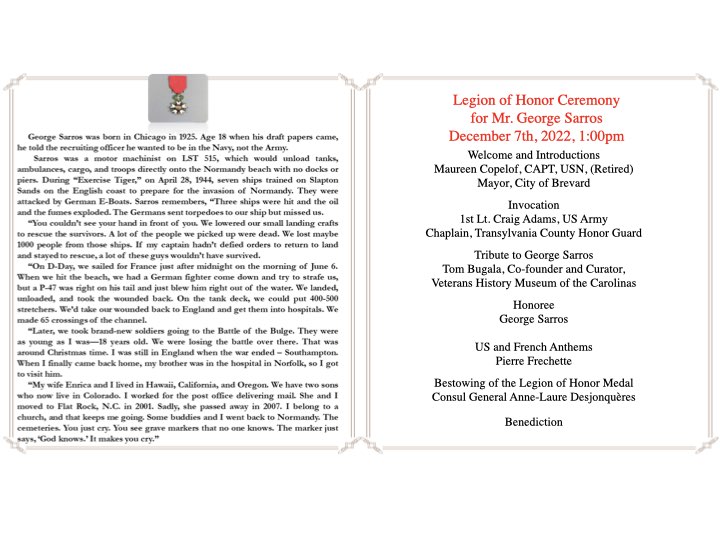 Born in Chicago, George Sarros joined the Navy at age 18. In 1944, he was a motor machinist on LST 515, which, on D-Day and beyond, would unload tanks, ambulances, cargo, and troops directly onto the Normandy beaches.

Earlier, during “Exercise Tiger” on April 28, 1944, seven ships were training on Slapton Sands on the English coast to prepare for the invasion of Normandy. They were attacked by German submarines.

George remembers, “Three of our ships were hit and the oil and fumes exploded. The Germans sent torpedoes to our ship but missed us. We lowered our small landing crafts to rescue the survivors. A lot of those we picked up were dead. We lost maybe 1000 people from those ships but my ship saved about 100.”

Sarros recalls,
“On June 6, 1944, we sailed just after midnight. Our ship was full of engineers, tanks, and trucks. We hit the beach around 1:00 P.M. I was manning a 40mm anti-aircraft gun. We had a German fighter come down and try to strafe us. But no sooner did he come down, but a P-47 was right on his tail. And just blew him right out of the water.”

Liberated France and all of Europe

When LST 515 landed, it was one of many that began the invasion which eventually liberated France and all of Europe from the German Nazi occupation. LST 515 made 65 trips across the English Channel in the next days, taking wounded soldiers to hospitals in London and delivering tanks, ambulances, trucks, and engineers to the fight on the Normandy beaches. Later they took brand-new troops going to the Battle of the Bulge.

After the war, Sarros worked as a postal carrier, moving with his wife, Enrica, to Western North Carolina in 2001. Sadly, Enrica passed away in 2007.

And now taking his place among these other luminaries and heroes . . . George Sarros.

You may meet Sarros in the Veterans History Museum of the Carolinas (21 East Main Street, Brevard) after the ceremony. For more information, email janisallen@janisallen.com or call 828-507-3171.