Still Hoping to Save the Kitty Hawk 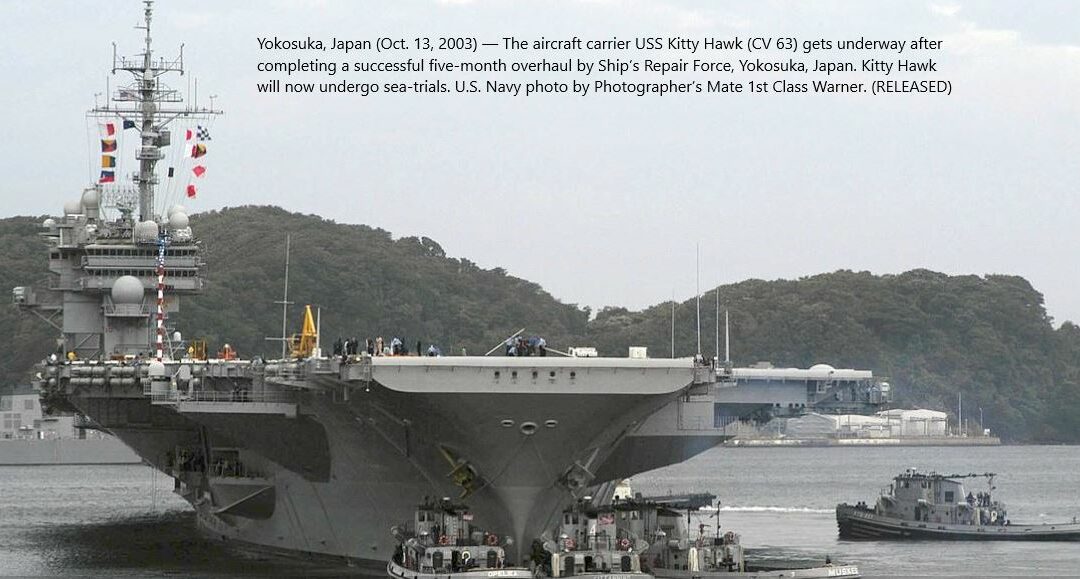 From the time David Cook turned seven years old until he raised his right hand to
take the oath to defend his county, he knew he was destined to join the US Navy.

Cook can trace his family’s Navy service back four generations.  His father finished
his Navy career in the same year Cook completed boot camp.  You could say Cook
was born to be in the Navy.

Cook said his father ‘pulled a few strings with the Admiral’ to get him assigned to
Naval Air Station North Island in San Diego, California, where his father served.
When he arrived at his first command, Cook’s division officer said his father had
requested Cook for the next day and for him to wear his Service Dress Blue
uniform.  Cook asked his father, “What’s going on?”

“He said, ‘I’m getting a Navy commendation medal and I want you standing ranks
with me.’ I thought that was pretty cool,” said Cook. “I got to have tea with the
Admiral.”

A picture of David Cook after Bootcamp. Cook said, “He knew he was destined to join the US Navy.”

Cook asked command, “what ship?” The answer was the USS Kitty Hawk.
“I was like ‘cool’,” said Cook.  “I joined up in North Carolina, so I had a connection
with it.”

That connection inspired Cook to read up on the Kitty Hawk’s history.  Cook found
another fact that made him feel a bond with the aircraft carrier.

“I was born in 1961. The ship was commissioned in March of 1961,” said Cook.
“So, I had a connection with that, being so close to my birthday.  It was kind of a
spiritual thing between me and the ship.”

A picture of the Northrop Grumman E-2 Hawkeye from Cook’s collection of memorabilia from his Navy career.

“Our call sign was the Sun Kings,” said Cook. “Basically, it was what we call carrier airborne early warning squadron. Kind of like the Navy’s version of the Air Force’s AWACS. They actually called the Hawkeye the mother of the AWACS.  We were the eyes and the ears of the fleet. We were always the first ones off the deck.”

An Encounter with a Russian Submarine

Cook’s bond with the USS Kitty Hawk grew stronger early one morning in
1984. After a training exercise with the South Koreans, the carrier continued
sailing through the Sea of Japan. Cook remembers that his squadron wasn’t flying
that night, but he was still at his post on the flight deck. Sometime near 0300
hours, Cook took a snack break that he would never forget.

“I went down to the berthing area and opened my coffin locker, grabbed a candy
bar, and about that time, it sounded like a bomb going off,” said Cook. “And I’m
like, oh my god, they have dropped a bomb on the flight deck.”
The Cold War between the former Soviet Union and the U.S. was in full swing.
Cook said the Kitty Hawk and the Russian submarine had been playing a game of
cat and mouse for weeks.

“Then I heard a scraping noise going down the side of the ship,” said Cook. “First, I
heard the bomb. Then, I heard the scraping noise, and I already knew we were
being followed or tracked by them. And I said, ‘I think we found her.”

Scared, but not surprised, Cook said these games between Russian and American
vessels were common during this period in American history.  His own E-2
Hawkeye squadron took pictures of the Russian submarine very close to the
carrier’s battle group. Cook believes the Russian submarine had already crossed
the Kitty Hawk’s bow at least once before the collision.

“Hitting a nuclear submarine about where the reactor is, it’s a good thing that we
all didn’t get blown up,” said Cook.  “It could have been bad.”

Cook saved a 1984 edition of Newsweek magazine containing this picture and a report of the collision with the Russian Submarine.

Reports of the collision appeared in world newspapers, magazines, and television.
As reported by Newsweek, both vessels escaped without serious damage. Cook
believes this footnote in the Cold War is just one piece of the carrier’s history that
should save the Kitty Hawk from the scrap yard.

A call to Action

“Even before they decommissioned her, I thought, I have to do something,” said Cook. “I would be devastated if they turned it into razor blades.”

The Navy’s last commissioned conventional-powered aircraft carrier operated for 48 years before it was decommissioned in 2009. The Kitty Hawk is also the last aircraft carrier that could be turned into a museum ship.  According to the Navy, nuclear carriers require extensive disassembly to remove their nuclear reactors during decommissioning, leaving them in an unsuitable condition for donation. 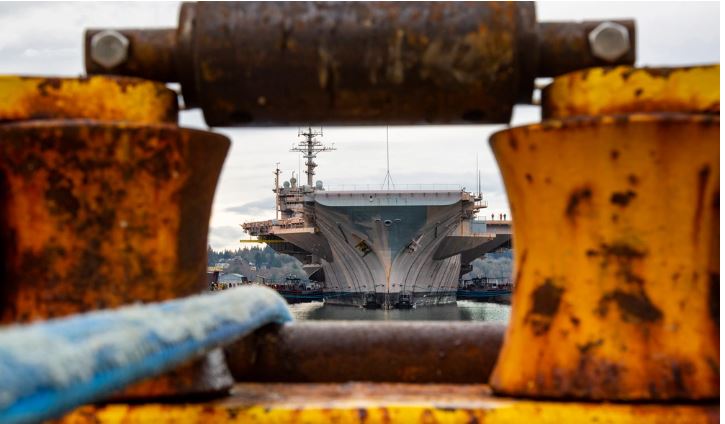 BREMERTON, WA, UNITED STATES 03.09.2021 The Kitty Hawk was moved into Dry Dock 6 March 9th The Dry Docking will allow Marine growth to be removed from the hull in preparation for its departure and eventual dismantling. The Kitty Hawk was decommissioned in Puget Sound Naval Shipyard and Intermediate Maintenance Facility in 2009 following 48 years of active service. The ship has been “Mothballed” at The Inactive Ships Maintenance Facility since then.(US NAVY) Photo by Wendy Hallmark)

Cook says the Kitty Hawk should be anchored in Wilmington, NC, next to the USS
North Carolina battleship.  “It would be great for tourism in North Carolina, and it
would also develop a lot of jobs,” said Cook.

USS Kitty Hawk Veterans Association had the same idea but as a Long Beach,
California, museum.  In a newspaper article dated March of 2017, the
Kitsap Sun of Bremerton, Washington, reported that the Association secured a
spot and was simply waiting for the Navy to put the Kitty Hawk in a donation
hold.  At the time, the carrier sat at the Puget Sound Naval Shipyard and
Intermediate Maintenance Facility along with four other decommissioned aircraft
carriers.

“Even though I was in the aviation field, there’s something about being at sea that
becomes a part of you,” said Cook.  “It’s an awesome ship.”

In October of 2021, the Kitsap Sun broke the news that the Navy sold two aircraft
carriers to the International Shipbreaking Limited, which is based in Brownsville,
Texas.  One of them was the USS Kitty Hawk. Even with this bad news, Cook says
he will continue to write letters to his congressmen and senators to save the
Hawk.

“Myself as a Navy veteran and all the other people that spent time on it, that was
our safe place to be when we visited other countries,” said Cook.  “It was our
home.” 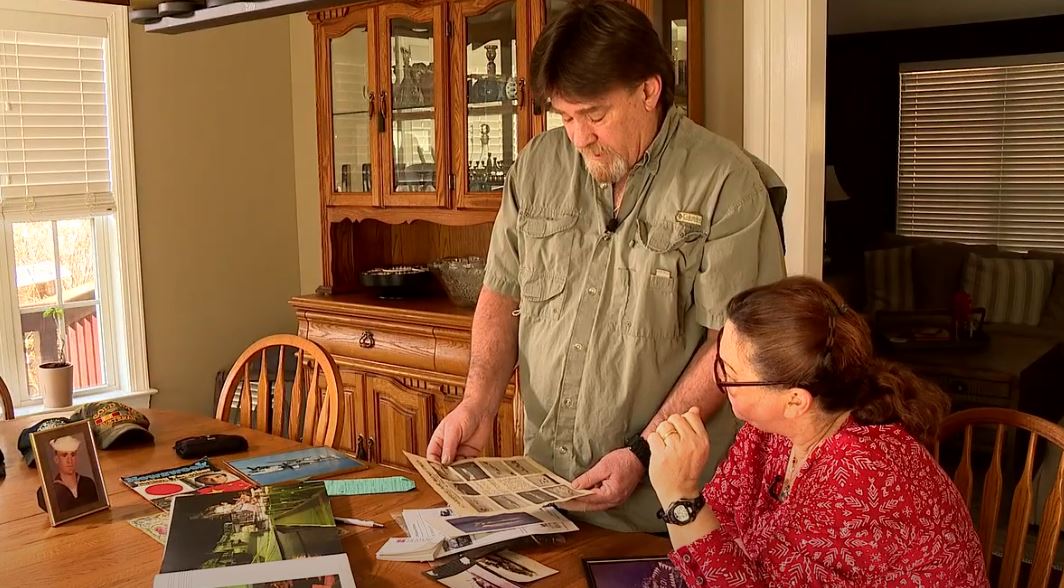 “It was our home,” said David Cook, USS Kitty Hawk veteran.  Above, Cook shows friend Michele Bretz his collection of memorabilia from his service on the Kitty Hawk.