Physical Therapy in a War Zone 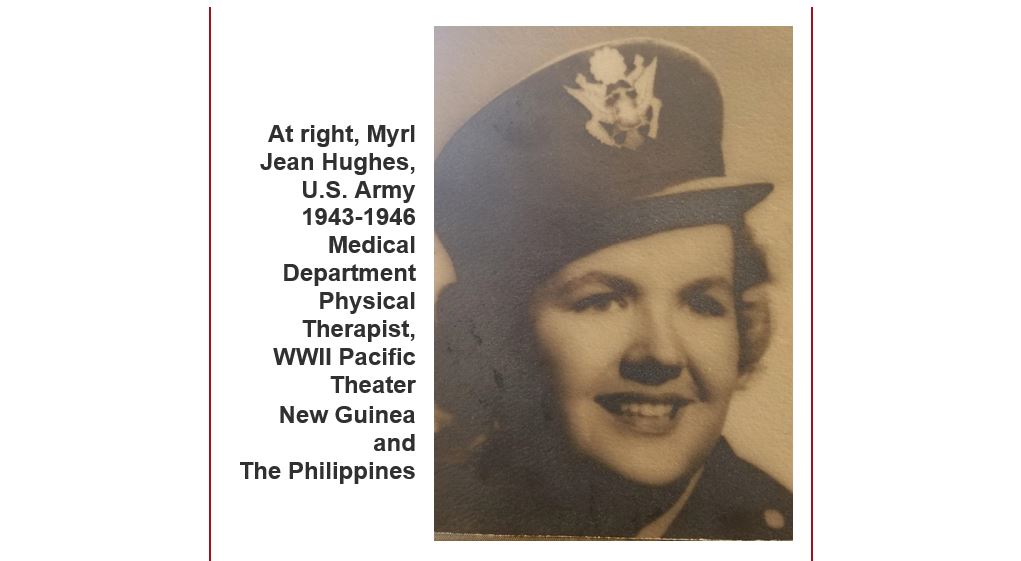 Myrl Jean Hughes tells her story: “I grew up in Hibbing, Minnesota, 100 miles from the Canadian border. My dad owned a printing business, printing stationery and booklets and other things. I had a sister and a brother and lived in a three-generation family. My grandfather had died as a result of a mining accident, so my grandmother was living with us.

“I was the baby of the family. The story I’m told was that when my parents brought me home from the hospital, my grandmother had been babysitting my brother. As soon as we came in the house, my grandmother took me out of my mother’s arms and said, ‘This one’s mine, you can have that one,’ and handed my brother (who was in his terrible twos) to my mother. My grandmother, Mary Tallon, raised me as much as my mother did. I had a very nice childhood.

“Because the war was on, I knew my parents wouldn’t be able to send me to complete the rest of college, so I wanted to find something I could do for myself. My sister had convinced me, rather than going into nursing, to go into something where you didn’t have to work with people. Well, I discovered I loved working with people.

“The Army and Mayo clinic had combined to create a quickie course in physical therapy—six months of training at Mayo Clinic. After that, you could decide if you wanted to continue and get a commission in the Army. In 1942, I was accepted into the program and received my training in physical therapy from the U.S. Army and the Mayo Clinic in Rochester, Minnesota. Then there was six months of apprenticeship in an Army hospital, which I did in Louisville, Kentucky at Nichols General Hospital. The Army paid for everything except room and board.

Hughes’ Story in a Book

The U.S. Army had a policy that women could not serve overseas unless they were 21 years old. Myrl Jean turned 21 in January 1944 and was given orders to New Guinea. She boarded a ship in San Francisco and sailed to Brisbane, Australia, staying there four and one-half months while the hospital was being built.

Hughes said, “My mother had made me promise that I would not volunteer for overseas service. My birthday is January 1. On January 4 I had orders to go overseas. They only waited three days after I hit 21! But I kept my promise to my mother because I hadn’t volunteered. When I wrote to my mother to tell her that I was going to go, her letter to me crossed in the mail with my letter. She absolved me of my responsibility for volunteering, saying that if she had been in my shoes, she would have volunteered.”

The 334th Station Hospital had been built by the men of the hospital, while the female nurses, a dietician, and Myrl Jean Hughes, the unit’s only physical therapist, waited in Australia. By June of 1944, the hospital was completed, and the women joined the hospital in Hollandia, New Guinea. The hospital was a frame structure much like the thousands of wooden Army barracks built in the States during the war.

Hughes said, “It looked very much like a M.A.S.H. building. That’s why I always liked watching M.A.S.H. During that four months we waited in Australia, we lived in two different places. At first, we were in Ipswich, Australia, just outside Brisbane. At some point the women all got moved to what been a monastery in the mountains.” 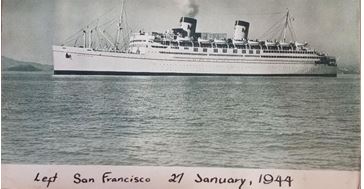 To the Southwest Pacific

“We had traveled to Australia on a very ‘cruisy’ ship, the Matsonia (pictured at right), which, in peacetime, was a luxury liner going between California and Hawaii. It took us two weeks from California to Australia. I think part of that was because they were zigzagging all the way to avoid submarines. But that was very enjoyable.” She laughed, “We even put on a talent show on the ship. I sang. I sang songs like ‘Stardust’ and the Andrews Sisters’ songs, like ‘Don’t Sit Under the Apple Tree with Anyone Else but Me.’”

Myrl Jean had been treating illnesses and injuries in the South Pacific since her arrival in New Guinea in June 1944. However, with the invasion of Leyte in The Philippines on October 20, 1944, the hospital got its first rush of casualties in early November. MacArthur waded ashore in Leyte on October 25, and the island was finally secure by Christmas Day.

Those the medics could not fix were taken care of by the field hospitals. What the field hospitals couldn’t take care of either went back to the States or to a station hospital. Myrl Jean’s unit was a station hospital which took care of serious illnesses or injuries. Some of the sick or injured patients returned to their units, while others were stabilized for transport back to the States. Myrl Jean, as a physical therapist, took care of orthopedic and leg amputee cases. The hospital did not supply prosthetics. She also took care of routine cases such as torn ligaments and back injuries.

Myrl Jean Hughes remembered the everyday things about living in New Guinea, “New Guinea was often 130° during the day. We had special chocolate bars that wouldn’t melt. I think they were probably solid wax. They were perfectly usable for us, but when we came back into the States, there was no way you’d have gotten your teeth into them. They would be solid. They tasted like chocolate and weren’t bad, but all I could think of was that they must be made of wax.”

Hughes remembered one soldier on the ward whose leg was packed with ice. “The other soldiers would store their beers in the ice next to his leg, making him the most popular guy on the ward,” she laughed. “He was good-natured about it because the others came around so often.”

The Birth of Physical Therapy

Thinking about her profession, Hughes said, “It was many years after I returned home before I realized that physical therapy was just being born when I was in it. They hadn’t even decided whether to call it physical therapy or physiotherapy. I think in England it was called physiotherapy. But I didn’t know at the time that it was a new profession that I was a part of.” 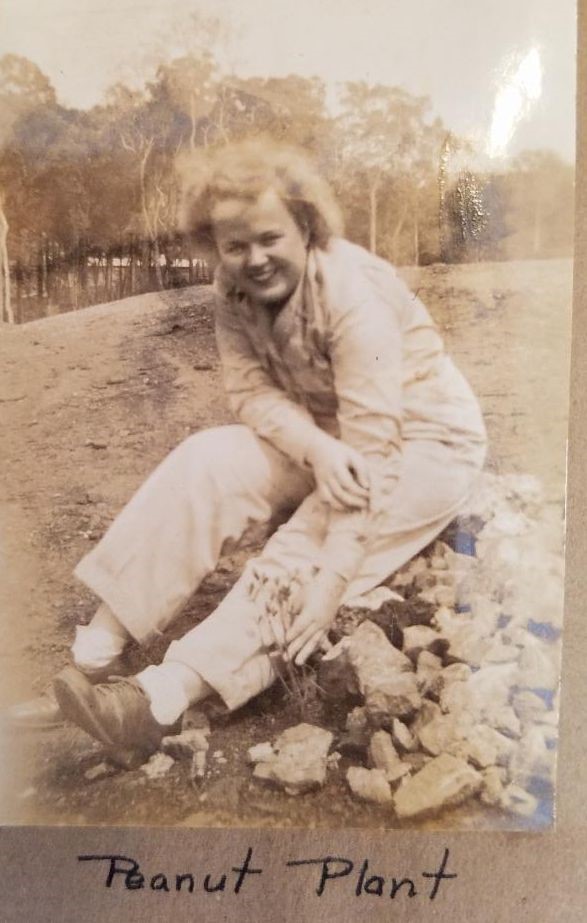 Myrl Jean wore slacks rather than the dress uniforms worn in the States. She and her unit slept under mosquito nets. She was allowed to date men and enjoyed going aboard the visiting Navy ships where the food was much better than the Army food

Bob Hope and Jack Benny both put on USO shows on New Guinea. She enjoyed both shows but noted that the Jack Benny shows were more raunchy. Lew Ayres, the original actor in “Dr. Kildare,” was a conscientious objector who was assigned as a chaplain’s assistant in New Guinea and played the organ for services. One of Myrl Jean’s friends got married there and Myrl Jean sang at her wedding. Lew Ayers played the organ for the wedding. 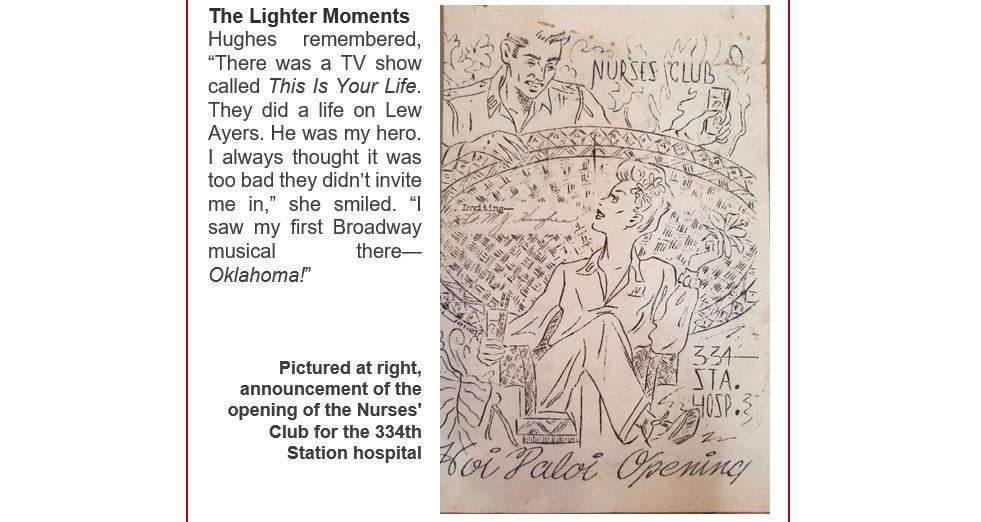 Myrl Jean was playing baseball when the Japanese surrender was announced. The 334th Station Hospital was reassigned to Japan in 1945. They first went to The Philippines for about a month. Myrl Jean received orders back to the States, and then left the Army in 1946. After the war, she joined the American Legion because a woman there made a deal with her—that she would re-vamp Hughes’ uniform for general use. The woman offered this service because she wanted to get more women into the American Legion. Hughes has attended or hosted several reunions of the people who worked in the 334th Station Hospital.

Back in the States

Hughes continued, “When I got home, we had a new minister in our church who had been an Army chaplain. He wanted to start more programs for children and a youth choir. I was recommended to him to create these programs. They were all pretty successful. He asked me one day, ‘Have you ever considered full-time church work as a career?’ I thought he meant mission work, so I told him ‘I have no desire to go back under the Golden Gate Bridge.’ But he said what he had in mind was directing the education programs in different churches.”

“I received a B.A. in Christian Education from Macalester (Presbyterian) College in St. Paul, Minnesota, and a Master of Arts from Columbia University in New York (in partnership with Union Seminary). At different times, I worked as Director of Christian Education for Presbyterian Churches in St. Paul, Cincinnati, and Bedminster, New Jersey, for 40 years altogether. My last job was as executive secretary for the Presbytery of Elizabeth, New Jersey.”

Myrl Jean has never married. She had been active in bowling, bridge, Lunch Bunch, Adopt-a-Highway, and The Patrol, at Haywood Knolls Community in Hendersonville, N.C. She moved to Hendersonville in 1994 from Bedminster, New Jersey. 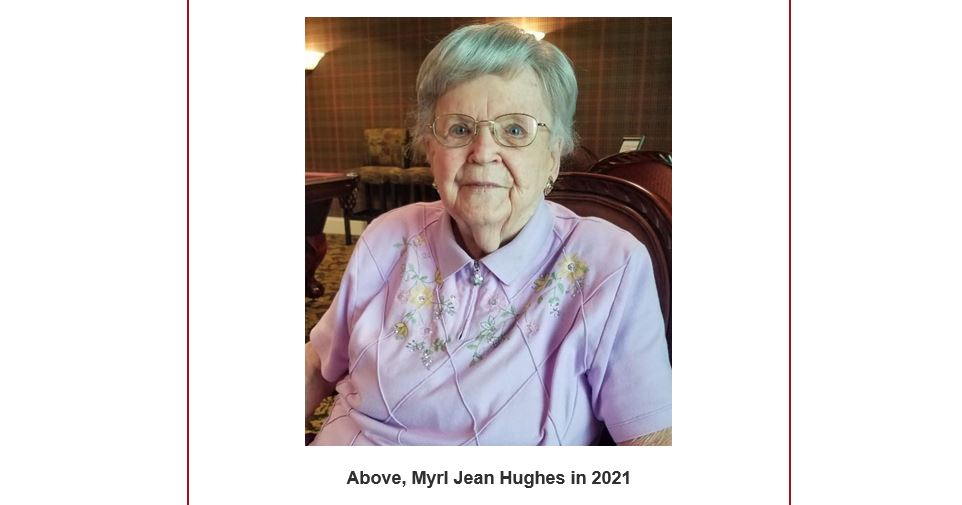 Thoughts On Her Service

Hughes looked back, “I was in for 37 months and I’ve always said I would not want to repeat that three-year period, but by the same token, I wouldn’t trade it for any other period of my life. I wouldn’t trade it. It has meant that much to me in my life. I’m very glad I did it.”

Asked what she remembered most from her years of service, she said, “The thing that stands out most happened during a USO show. We were not very ‘G.I.’ there. We didn’t have reveille in the morning, raise the flag, or have taps at night. It was just like in M.A.S.H.—you didn’t see much evidence of patriotism.

“I can remember being at one of the shows—the show opened with the raising of the flag. It suddenly dawned on me—I was moved to tears when I realized that I had not seen the American flag for months. I can remember just sitting there practically bawling, seeing the flag raised and saying the Pledge of Allegiance. I hadn’t even thought about the flag before that. I realized it meant more to me than I thought it did.”