USS Enterprise, “The Big E” — A Recipe for Success

It’s been said that an Army marches on its stomach, attesting to the importance of well-provisioned forces in the military. For Clyde Jones, “serving” in the Navy took on new meaning as he directed the preparation of 15,000 meals a day for the hungry sailors, Marines and Air Wing 9 aboard the USS Enterprise, nicknamed the “Big E.”

The son of Winfred and Martha Jones of the Silversteen community in Lake Toxaway, Clyde and his eight siblings grew up on a 120-acre farm where everything was done by hand, horses and mules. Five of the seven brothers served in the U.S. military. Clyde enlisted in 1954 at age 18, retiring 32 years later as a Master Chief Petty Officer, the highest non-commissioned officer in the U.S. Navy.

Life Aboard the Big E

In 1965 the Navy was looking for volunteers to serve aboard the USS Enterprise, the world’s first nuclear powered aircraft carrier. Petty Officer First Class Jones volunteered. “My Leading Chief sat me down and said, ‘Jones, you’ve had eight years in the Navy, but you’ve never been on a ship like this. You’ve got to be top notch. Everyone has to conform to the high Enterprise standards.’”

A leader in the ship’s company, Jones oversaw S-2 Division, a section of the Supply Department. “My job was feeding 5,000 troops – that’s 15,000 meals a day,” said Jones. Energy levels had to be replenished on a constant basis. “The mess hall was open 22 hours a day in order to feed troops around the clock.” Supervising 75 professional cooks and bakers and numerous mess attendants was only part of Jones’ busy routine. He was also responsible for requisitioning, receipt, stowage and issuance of all foodstuffs used in the general mess. Cleaning and maintenance of seven mess decks, six storerooms, three “reefer banks” and all food and vegetable preparation areas required the concerted efforts of all the members of the division.

Helicopters transferred provisions to the ship’s flight deck, elevators carried the supplies to the hangar bay and from there items were manhandled down into the lower storerooms, hand-over-hand. Said Jones, “It took all hands on deck, from the lowest seaman to the commanding officer to get the job done. It required a lot of coordination, but we were a well-oiled team.”

Feeding took place around the clock, depending on the schedules of the ship’s personnel. “Everyone learned early on when to hit the chow line,” Jones noted. The forward mess hall was the “speed line” – hamburgers, hot dogs, fried chicken in 30 minutes. The after gallery provided larger, more complicated meals. “We practiced progressive cooking all along the line,” he continued. “To feed 5,000 people breakfast, you prepare 100 portions at a time, like in a restaurant.”

Besides hungry sailors, the forward mess hall also housed bombs from the lower decks where the ordnance men (“red shirts”) prepared them for transfer to the flight deck and waiting aircraft. Personnel complacently munched French fries and hot dogs next to the ordnance — fast food and bomb assembly.

Jones is extremely proud of the Big E and his time on board. “I have to brag a bit on the Enterprise. She served in the Atlantic and Pacific fleets for 53 years, during the Cuban missile crisis and many tours in Vietnam and the Middle East. She has always performed above and beyond.”

During his first tour on the Enterprise, all personnel attached to the aircraft carrier received the Navy Commendation Medal for outstanding heroism in action against the enemy. The citation reads: “In all operations, the Enterprise’s performance was distinguished by professional and exacting thoroughness….The courage, stamina, perseverance and dedication displayed by the officers and men of the Enterprise and Attack Carrier Wing 9 were in keeping with the tradition of the United States Naval Service.” 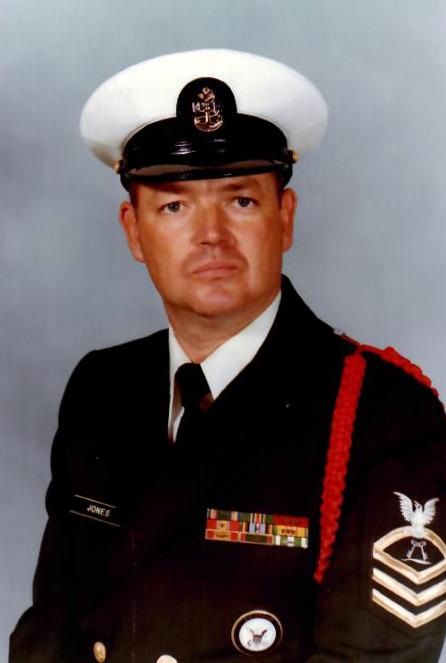 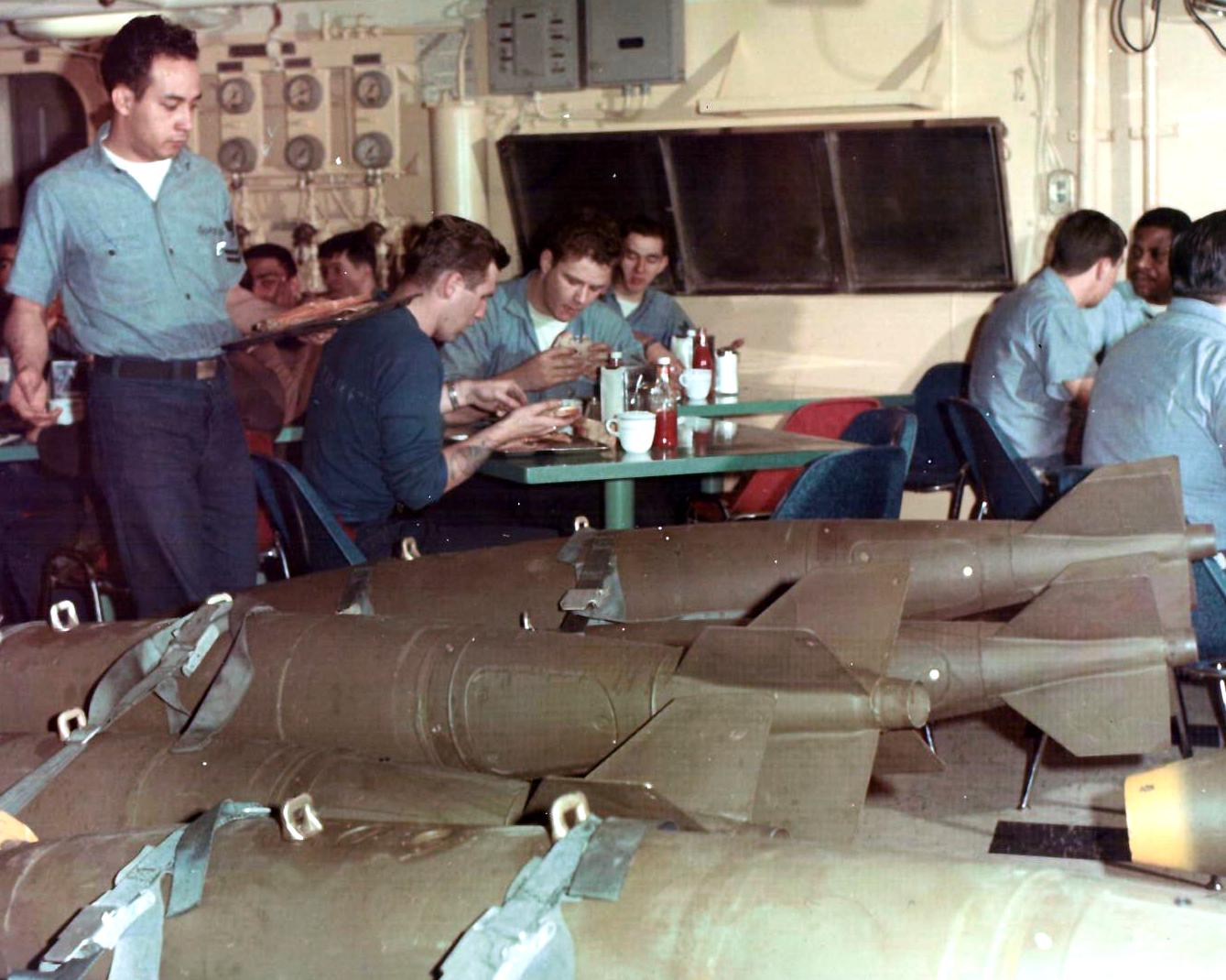 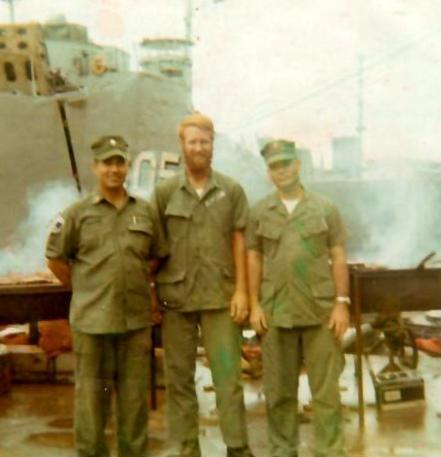 After two and a half tours on the Big E, Jones attended Naval Amphibious Counterinsurgency School in Jacksonville, FL and was sent to Vietnam in support duty for small river craft that had been hit by the Viet Cong. “I was on the USS Tutuila, known as the mother-hen,” Jones noted. “We stayed tied up and the small craft would come along side of us. We’d lift them up on the dry dock and repair them there.”

Once a month Jones travelled by truck to Long Binh for provisions. “We used enclosed vehicles,” he said. “Anything that wasn’t padlocked would be stolen by the locals who rode alongside the truck on mopeds and lifted the supplies.”

Patrol boats provided security for the mother-hen 24/7. In order to thwart sapper attacks (explosives attached to the ship by Viet Cong swimmers), gunners mates continuously lobbed grenades into the water. “It was no picnic,” he noted. “I was glad to go home.”

Jones’ return to the United States mirrors that of many other Vietnam veterans. In both Alameda, CA and Jacksonville, FL Jones and his shipmates were treated badly. “It got very nasty,” he said. “We were instructed to keep our composure and avoid trouble. It was especially hard for the younger guys, the combat troops. So many of their buddies died over there and when they returned they were called baby killers. Some of them still can’t deal with it.”

Jones was made Master Chief Petty Officer in 1981. His last duty station was at the Naval Air Station in Pensacola where he managed the BEQ (Bachelor Enlisted Quarters). His Navy evaluation reported: His exceptional technical competence and supervisory ability are clearly evident in the outstanding results he achieved in all assigned tasks.

Clyde Jones married Evelyn Dishman in November1973. He lost her in a car accident in Etowah in June 2005. After Jones’ retirement in 1986, the couple purchased a home in Brevard where he went to work for the City of Brevard in the Water Department, reading water meters for ten years. “I loved the walking,” Jones said. “It kept me in good shape.”

In addition to a glowing report on the service of his esteemed USS Enterprise, Jones added this final comment to his story. “I am proud to have served thirty-two years in the greatest military service in the world, the United States Navy. And I’m proud to have been able to serve the greatest country in the world. God Bless the United States of America.”

In collaboration with the The Veterans History Museum of the Carolinas and writer Michel Robertson, The Transylvania Times will publish an article once every two weeks on a local veteran who served in Vietnam.