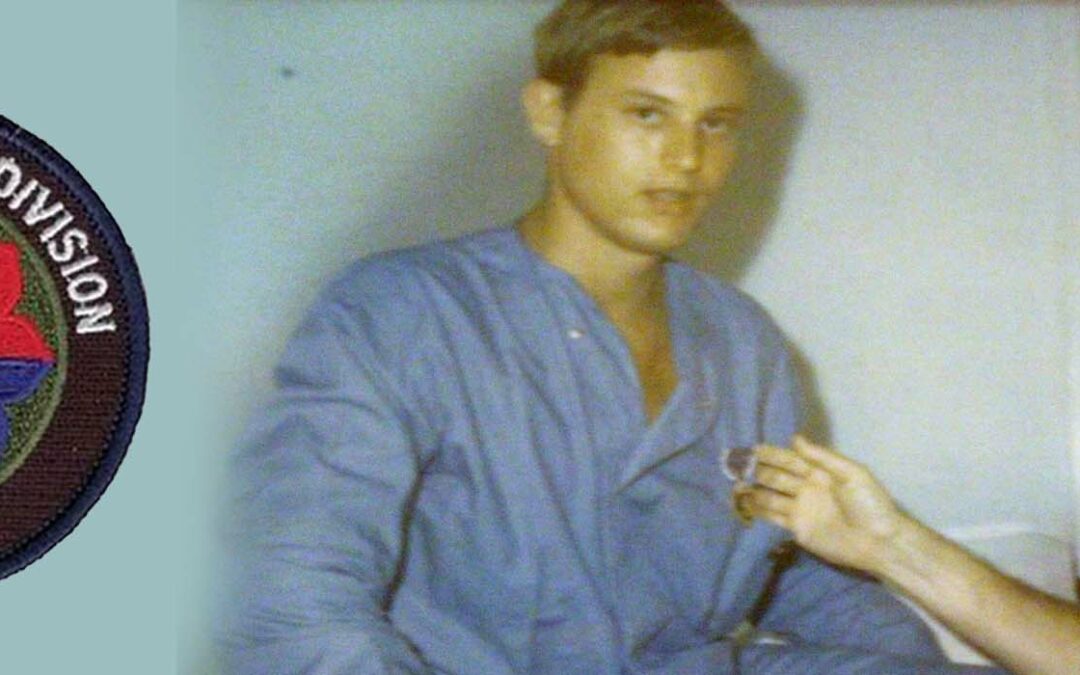 John “Larry” McCall graduated from high school in 1967 and was drafted into the Army in 1968 at age nineteen. He and nine other young men from his North Carolina mountain community reported to Fort Bragg for basic training and then to Fort Polk, Louisiana for Advanced Infantry Training. McCall’s father had provided a compelling example of answering the call of duty. An Air Force navigator during WWII, he spent one years as a German prisoner of war. “Although he died when we were very young, he was still a major influence on our lives.”

To McCall’s regret, upon their arrival in Vietnam, his nine friends were dispersed to the 25th Infantry Division in the jungle while he was sent to the 9th Infantry Division, in Tân Tru and Tân An, southwest of Saigon. Nicknamed “The Old Reliables” during WWII, the 9th Infantry Division served with the Mobile Riverine Force in Vietnam’s fertile Mekong Delta, a vast maze of rice paddies broken up by rivers, swamps, narrow canals and dikes. Their mission was to secure this extremely challenging battleground against the Viet Cong Communist insurgents. During the Vietnam War the Delta was the site of many Army search-and-destroy missions.

Fighting in the Mekong Delta

“Our base camp consisted of a tent with a wooden platform, said McCall. “We travelled primarily by helicopter which dropped us into the flooded rice paddies.” The U.S. objective was to initiate battles with the Vietcong and use the Army’s superior firepower to inflict large losses. “We would be out there anywhere from two to three weeks before they’d return to pick us up, so we had to watch our rations and ammunition supplies very carefully. Sometimes we had to walk back to our base camp.

“The helicopters didn’t have any doors, so everything was open. At first, for a little old mountain boy like me, if it had been possible, I would have jumped out. It scared me so much, but after a while I got used to it.” The delta’s climate was an additional impediment during McCall’s early days in Vietnam. “I was evacuated from the field for heat exhaustion twice. Eventually my system adjusted to the extremely hot, humid climate and I didn’t have any more trouble.”

McCall once leapt from a helicopter which had been hit. “It was spinning, so we jumped out of it. Luckily, we were over the rice paddies. We never hit solid ground. Sometimes it was chest deep. We had to wiggle our way out of the water and mud, watching for snakes and leeches.” The checkerboard of rice paddies was separated by dikes of mounded dirt used to navigate the area. “We always walked in the rice paddies. We never walked on the dikes because they were booby-trapped. It wasn’t an easy life.”

During one battle, McCall rescued a First Lieutenant whose helicopter had been shot down, for which he received a Bronze Star. “We weren’t family over there. We didn’t try to get familiar because we might not be there very long, but we always helped each other as much as possible.”

In February 1969, during the Tet Offensive, McCall was shot in the arm and leg. After a week in a Saigon hospital he was flown to Tokyo where they reopened his wounds and sewed him back up. He returned to Fort Bragg where he received therapy for his arm and leg. McCall completed his active duty at Fort Bragg and received an honorable discharge.

Coming Home: Challenges and the Effects of Agent Orange

Back home, protestors, accustomed to viewing disturbing images and updated body counts on the nightly news, vented their frustration with the government’s policies on returning soldiers. Coming through the San Diego airport in uniform, Sergeant First Class Larry McCall endured verbal abuse and insolent treatment from many of his countrymen. “They called me a pot-head, among other things. I was around the stuff over there, but I didn’t use it. I had other things on my mind. I couldn’t understand why they were so negative about us. We were asked to go and we went. And when we came back, they looked at us as if we weren’t human beings. Today people come up to me and say, ‘thank you.’ It feels good, but I wonder where they were fifty years ago.”

Larry and his wife, Elaine, homecoming queen and captain of the football team, were high school sweethearts. Elaine was valedictorian of her graduating class. She was a college student when Larry left for Vietnam and remembers similarly rude behavior on campus. “We were engaged before Larry left and I was a student at Asheville/Buncombe Technical College,” she recalls. “I was in the student union when a guy sitting near me asked, ‘Why do you want to be engaged to somebody who’s going to come home with no arms or legs?’ I was so shocked that I slapped him in the face. I assumed I’d be in big trouble, but the teacher in my next class said to me, ‘Good for you!’ The whole thing was out of character for me, but that fellow never said anything ugly to me again.”

Like many Vietnam veterans, McCall suffered from PTSD. After arriving in the states, he was met by his family at a bus station at Fort Bragg. His fiancée, Elaine, came up behind him to give him a welcoming hug. “My first instinct was to knock her away because of what I’d been through.” Elaine had her own story to tell. “One day, several years after he got back, a helicopter flew over our house while we were sleeping. He woke up and was frantic. He said ‘Where am I?’ The helicopter sounds really scared him.”

The most lasting effects of McCall’s tour in Vietnam were serious health issues related to the toxic defoliant, Agent Orange. “We recognized the areas that had been sprayed because they looked like somebody had burned everything around, and there was a big fog. They brought in the planes and sprayed the soldiers in the field along with the vegetation. “We didn’t know exactly what it was until we came stateside and started having health issues. I couldn’t eat anything. I almost died.” McCall suffered a heart attack and pancreatitis with resultant diabetes. “I only have one-third of my pancreas.” 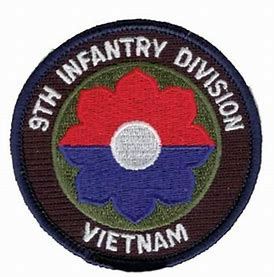 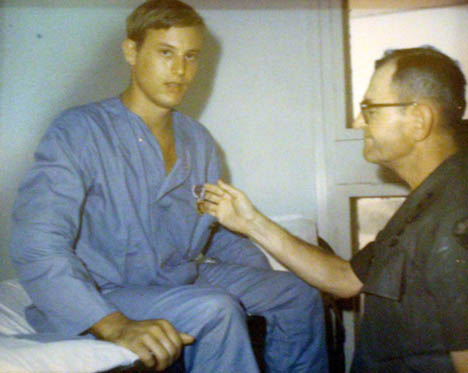 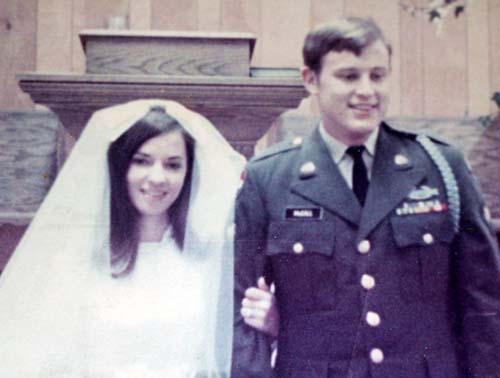 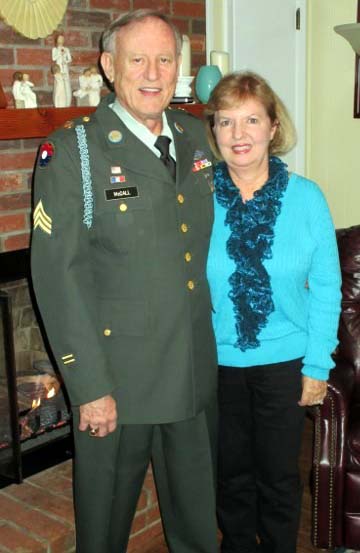 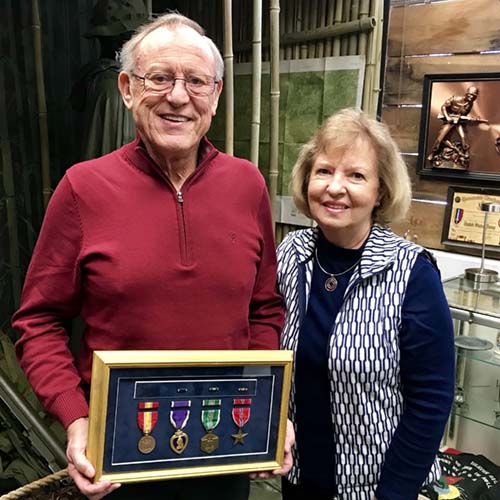 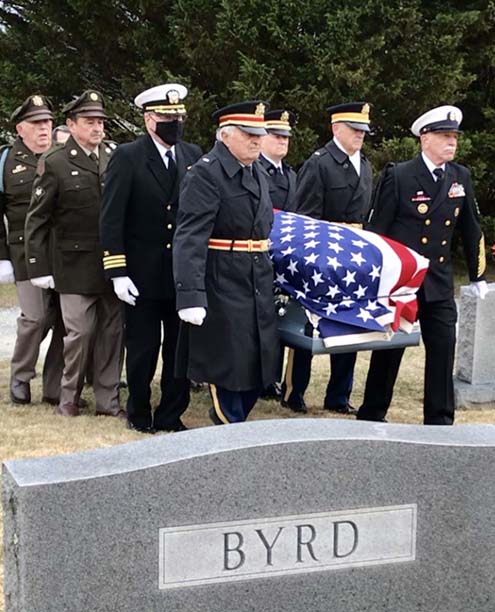 Pallbearers from the Transylvania County Honor Guard, many of them friends of Larry and his brother, Ray

Back in the Mountains

Although reluctant to make the trip, Larry visited the Vietnam Veterans Memorial after years of urging by his wife and daughter, Andrea. “I located the names of my friends on the wall. I saw family members making rubbings of their loved ones’ names, and leaving behind flowers, flags and other mementos. It was very moving for everyone. I think it’s a great memorial.”

After leaving the Army, McCall landed a position with the postal service, carrying mail in Brevard, NC, for many years. He married Elaine and the couple have a son, Jonathan, and a daughter, Andrea. He also served as a deacon in his church.

[Author’s note: Larry McCall died on January 6, 2022 at the Charles George VA Medical Center in Asheville, NC. His funeral service included a ceremony by the Transylvania County Honor Guard, many of whom were his friends.