In part one, we learned that Cooper and the crew of the USS Ommaney Bay had to abandon ship when hit by a Japanese kamikaze . . .

Joe Cooper told his story: “In the water, somebody said, “Here, you take this life jacket, but the buckle was busted, so I put it under my armpits. I was by myself out there, and I saw a life raft.

“There was sharks. Looked like men were climbing on each other’s shoulders to get out of the water. I remembered from Guadalcanal, we saw a submarine’s periscope. We fired a torpedo. I run back there and saw oil slicks. It was a cargo ship and sunk it. It was our first submarine. I’d seen men get pulled under by sharks and ate up at Guadalcanal. After Guadalcanal, they told us, ‘If you ever hit the water, don’t kick or nothing, because the sharks will come after you.”

“We retrieved one life jacket [from the Japanese submarine]. It said, ‘Made in Brooklyn Navy Yard for the Japanese Navy.’ They said ‘We can’t take that thing back home.’ The U.S. made stuff for the Japanese Navy before the war started. It would’ve made people mad that we made stuff for them.
“In the water, I stayed still and a few sharks just went by me. No ships came to support us because the light carrier Princeton had been damaged when it went alongside the Birmingham when it was bombed, so they stayed away from us. So they let us burn. About 297 men were killed. The ship didn’t go down. It was blowed up by a [U.S. Navy] destroyer.” 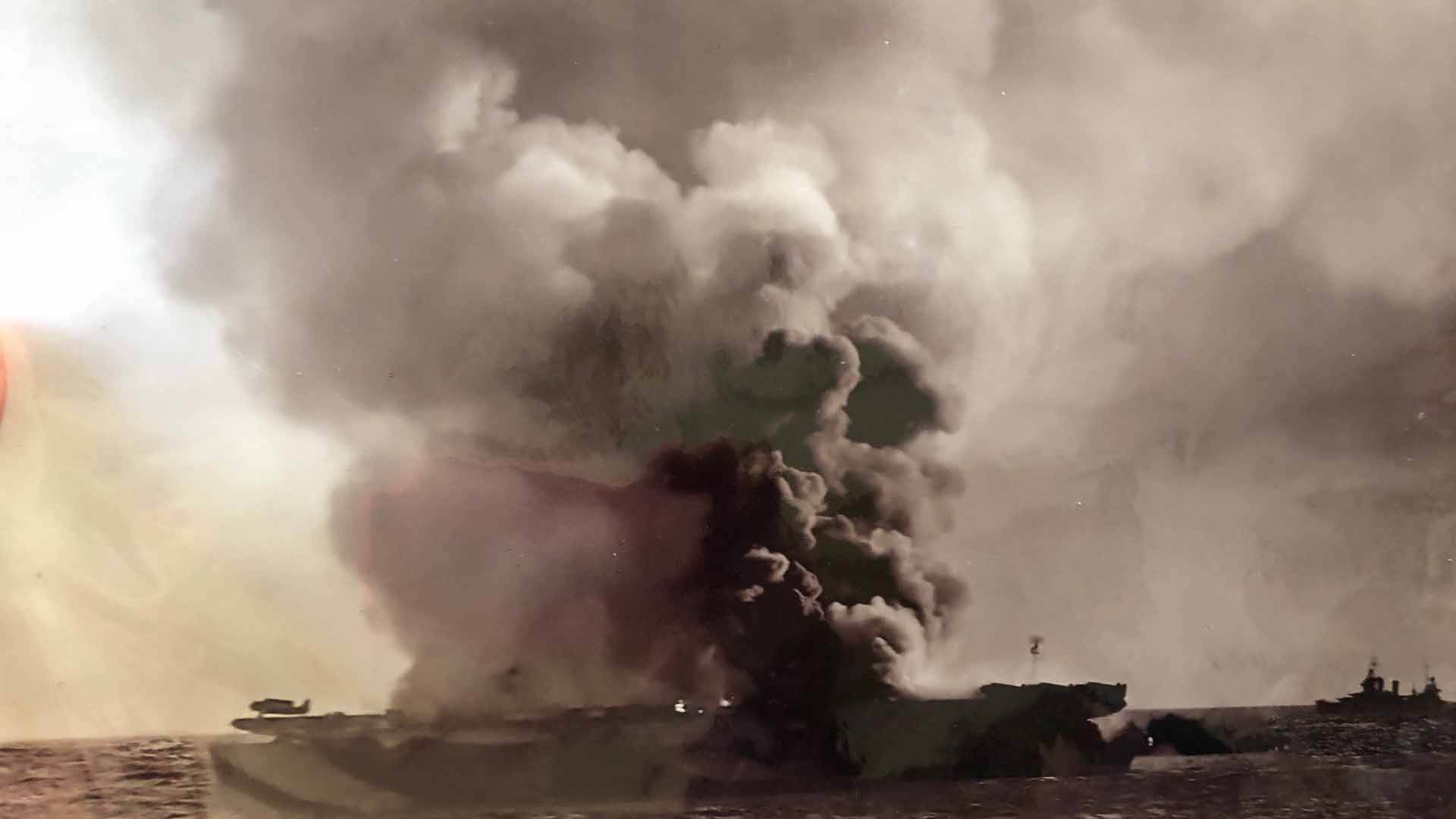 “I was out there about four or five hours. Finally, the old USS Helm 388 destroyer came by. They sent boats out and started picking us all up. Trying to get in, I grabbed the side and they said, ‘Hey, you’re gonna turn the boat over.’ I grabbed a cargo net that was on it and somebody reached down there and grabbed my arm and jerked me up on the deck. I was crawling. Somebody said, ‘Are you injured?’ I said, ‘No, I’m just scared.’ He put a cigarette in my mouth. I puffed on it and told him, ‘I don’t smoke,’ and I spit it out. They said, ‘Had anything to eat?’ I said, ‘Nothing since this thing happened.’
“Late that night, I was on the USS Minneapolis heavy cruiser. I stayed on the Minneapolis for three or four months. There was a 20-millimeter on the Minneapolis and they asked me to man it. I said, ‘Is that thing steady?’ It was big as a boxcar. I went up on top of that thing and manned a 20-millimeter.”

“We could still see the Ommaney Bay burning from the Minneapolis. When the sun went down, it looked like a big torch. Red hot. When it blowed, and I saw a piece of it, looked like the island, it went up a thousand feet in the air. The ship never did sink, it went BOOM. It’s still in the Pacific Ocean.

“After the Ommaney Bay got hit, they transferred some of the other crew to the Columbia. The Columbia was bombed, and they lost 25 of our crew. They brought in about 25 dead. One of them was my best friend. He was in the ammunition handling room. They couldn’t get him out. His name was Joe Kushivy. He was Polish. We’d play cards together.

“In April 1945, I was sent back to the United States and assigned at Fort Worden in Port Townsend, Washington. They had guns there in case enemy submarines came into Puget Sound. They had hundreds of landing craft there. My job was to check the boats and see if they were leaking water. That was the end of the war for me. I was discharged in 1945.”
Back Home after the War and then Into the Army
“Back at home, I couldn’t find work around here much, so I thought I’d try the Army. I enlisted in the Army as a Corporal in the infantry, trained in Camp Pickett, Virginia. I was in the 43rd Division, went to Ft. Lewes, and sailed on the Morris Rose to Germany.

“DeGaulle wouldn’t let us land in France. He got mad because they wouldn’t make him Supreme Commander instead of Eisenhower. So we had to go to Holland. I was in Germany during the Berlin air lift in 1948. Then I made Sergeant.”
After serving in the Navy in the Pacific during WWII and going home, Joe Cooper joined the U.S. Army and served in the

Joe Cooper: “I was in the Okinawa occupation, then they wanted replacements in Korea. I told the company commander I’d like to go. He said, ‘You have to go in the infantry as a rifleman.’ I said, ‘Yeah.’ I went in 1950. They sent me to Tokyo for training first. I went to Sassabo, which is the jump-off to go to Pusan.

In Korea after the Invasion of Pusan

“I came after the invasion of Pusan. A whole bunch of us went into Pusan on a landing craft. After a few weeks, there came a major out in the field. He said, ‘Hey, your papers said you were a volunteer to go to Korea. What kind of grudge have you got against these people?’ I said, ‘Sir, I ain’t got no grudge. I’m fighting for esprit de corps, fellowship.’ He said, ‘I don’t know nothing about that.’

So he left and then a commander called me up. He said, ‘Hey, do you know you turned combat on us? You’re in the wrong company.’ It was a radio station company. I didn’t know it, but I looked at my paper and I was assigned to the 7th Infantry division. They were building up that division in Chusan reservoir, so they put me there, and I was in the 7th Recon Division. In there, you go out and search, find, and radio it in. They don’t tell you in combat, they attack you.”
Heartbreak Ridge and Punchbowl

“We went out to Heartbreak Ridge and Punchbowl. There was an old walkie-talkie up there, sunk. We patrolled up there. Then we went to Tum-shon. That’s where outposts were—Pike’s Peak, Iron Triangle, Sniper Ridge and Jane Russell. We manned those outposts in front of Chinese troops outposts, Mountains 10-62. They called it Papa-San because it was big.
“Then they took us back to Camp Young, Korea, for training—throwing grenades, shooting rifles. I said, ‘Man, what’s going on?’ We were going back through training again. It was Christmas. We loaded up about 1:00 in the morning in trucks. It was snowing and my truck didn’t have a cover. Oh, it was cold. An officer gave me a fifth of liquor. I drank it like a Co-cola!”

“We started up. I didn’t know where they was going—25th Infantry Division, we relieved the Drake and Ilyan and Portstop and Queen Jack Outpost. We had to man them outposts. So the Chinese dug in the reverse side of the mountain. They said their tires were so deep, they could hold and dug in the side of the mountain. We didn’t have anything like that. A few logs on top of it, that’s all we had. We had to go on combat patrols at nighttime. We had an interpreter with us. They took Charlie Outpost.”

Taking Back Charlie Outpost from the Chinese

“We had to go and take it back. They said, ‘Load your ammunition, we’re going to take Charlie Mountain outpost back.’ The Chinese were good fighters. They just wore tennis shoes—they’re good to sneak up on you.
“We could see them up there on top of the mountain, going around the ridge lines. They was hunkered down in cold weather just like us. The last year and a half, they mostly returned to WWI combat—trench warfare. Korea ended just like WWI. We took some prisoners. The best weapon we had was the napalm flamethrower—into every bunker. I saw a Freddie Filipino. He hit me with a flashlight, thought I was the enemy. The shells were laying in right there, and I just left that area. I don’t know where the shells over the ridge come from. They come over the hill in front of us. The next day they loaded us up and took us on the reverse side in a gully. We dug in on the other side gully. BOOM, it threw dirt up 100 feet in the air.”

“Finally, I got orders to go back and they said, ‘I want you to pin this strap on, and if you take it off, you’re going back to the United States.”

Back in Brevard after being discharged from the Army, Cooper worked at Olin Mills [later, Ecusta] as a mechanic.

Joe Dayton Cooper served his country in two military service branches and in two wars. He will celebrate his 100th birthday on July 6, 2022. 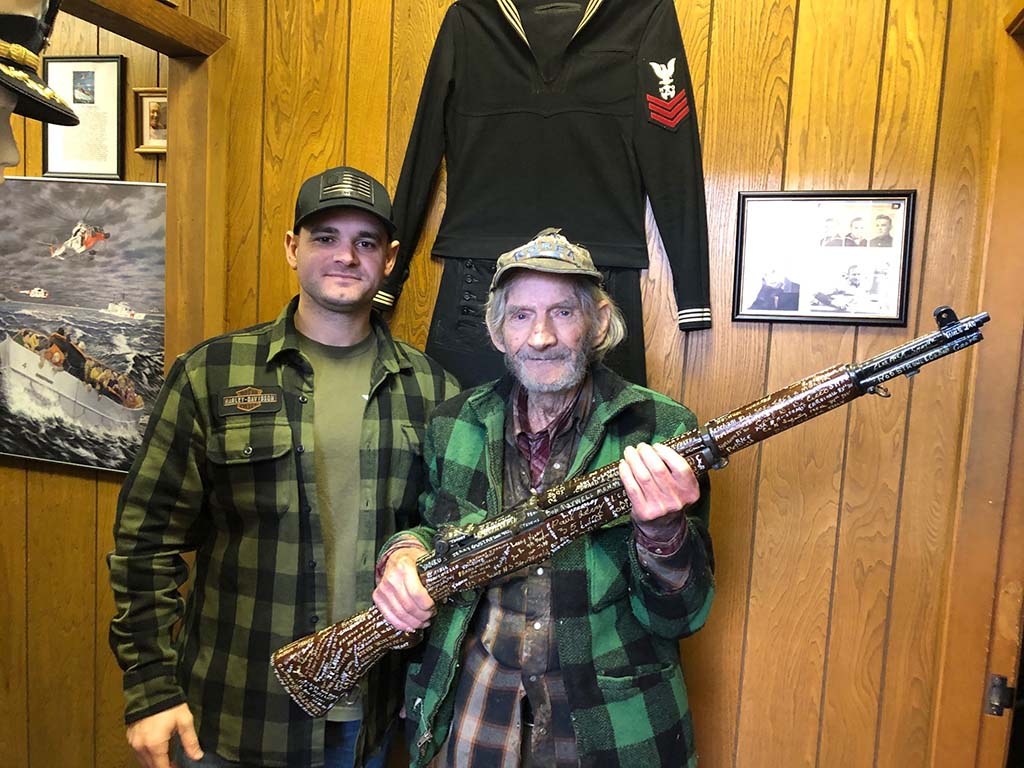 Author Andrew Biggio (left) interviewed Joe Cooper to include his story in the next edition of Biggio’s book, The Rifle. Cooper is holding the M1 Garand (which has 200+ signatures of WWII veterans) after adding his own signature.

Joe Cooper will be honored by the Veterans History Museum of the Carolinas during and after Brevard’s Memorial Day parade on May 30. Cooper will ride in the WWII Jeep during the parade and meet members of the public in the museum after the parade to sign free copies of his story.