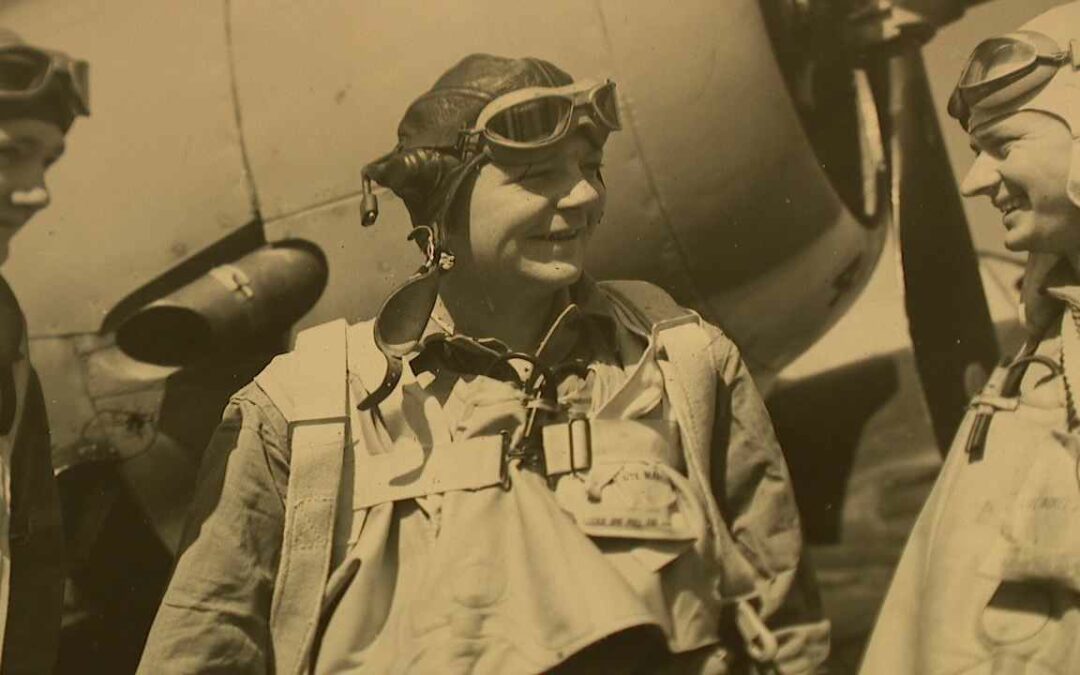 Rutherford County resident Gil Mays (center) with his crew next to their TBF Avenger onboard the U.S.S. Yorktown in 1944.  There were three crew members: pilot, turret gunner and radioman/bombardier/ventral gunner.

Rutherford County resident Gil Mays celebrated his 100th birthday in January of this year with a drive by celebration at his church. After a steady stream of cars filed passed Mays with drivers shouting out well wishes, he and his family held a small party inside to mark this momentous occasion.

“You don’t ever do anything by yourself. You always have that,” said Mays. “I have always been blessed with having good friends and everything to celebrate with me my good fortune.” 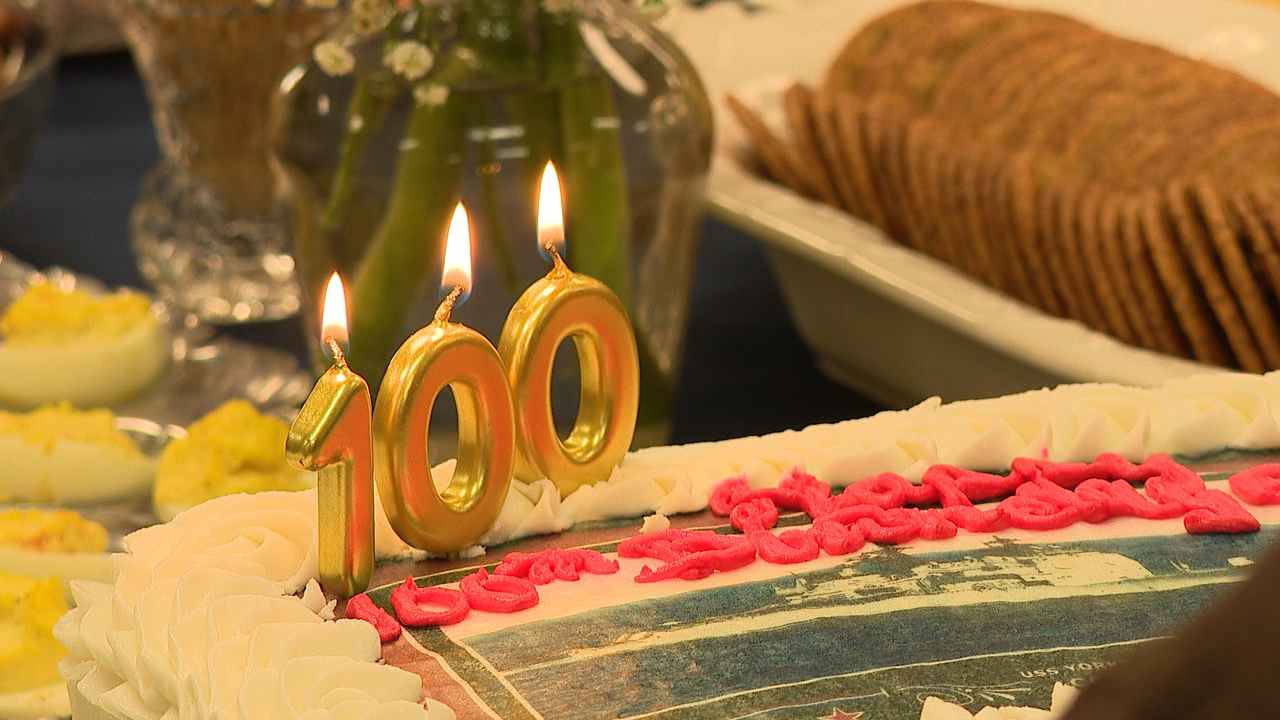 Gil Mays’ birthday cake with a picture of the U.S.S. Yorktown on the top.

Mays’ son David brought a scrapbook of old black and white photographs taken when Mays was a US Navy pilot aboard the USS Yorktown during World War II. He showed the photos to the grandchildren and the great grandchildren. David admits that when he was a kid, he had serious questions about the war for his father. But, David said, his father always chose to talk about the good memories. 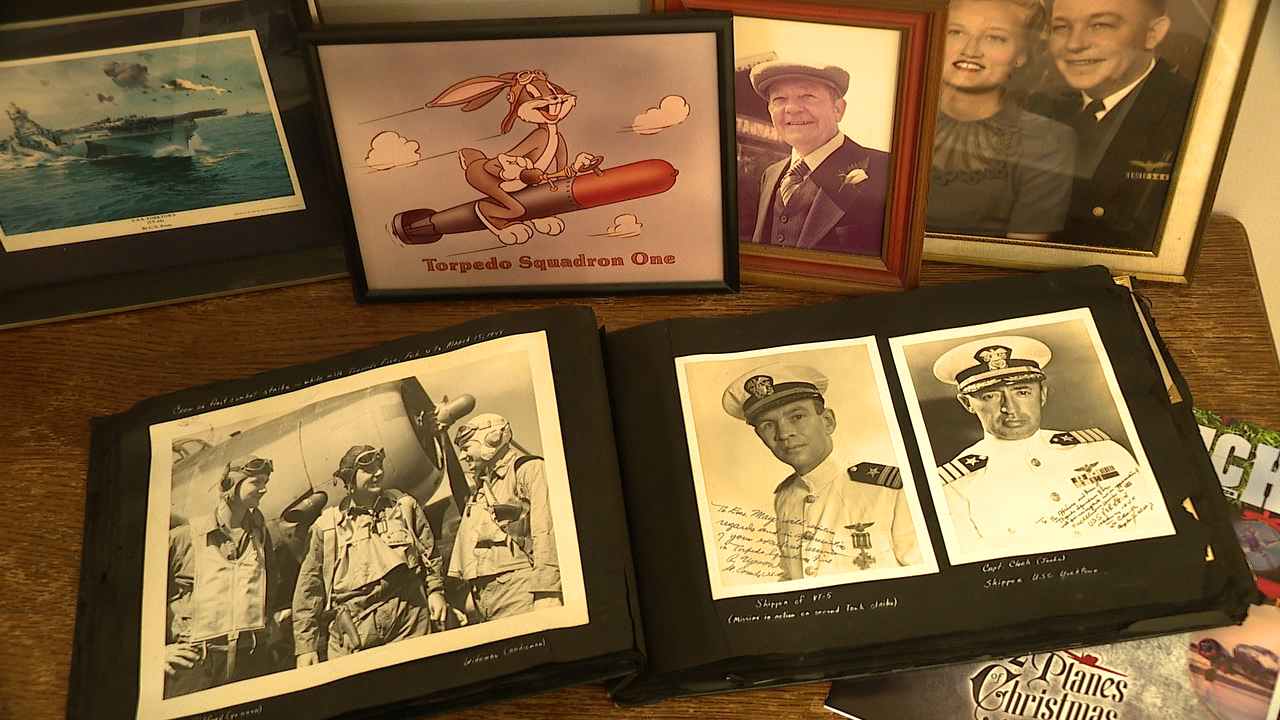 A table containing photographs and a scrapbook of Mays’ time in WWII at the birthday party.

“I would ask him as a child, ‘what was it like bombing, knowing that you might have killed people,’ said David. “He said, ‘I never thought about,’ then he said, ‘but I will tell you one thing,’ he said, ‘to pass the day, we would let the hanger down and play volleyball.’ That something you don’t ever think about on a ship.”

When son David said ‘let the hanger down’ he was referring to the aircraft elevator on the ship.  These elevators lifted aircraft from the hanger bay to the flight deck for deployment. According to Mays, the elevators served as the perfect place to blow off some nervous energy with a game of volleyball in between flights. 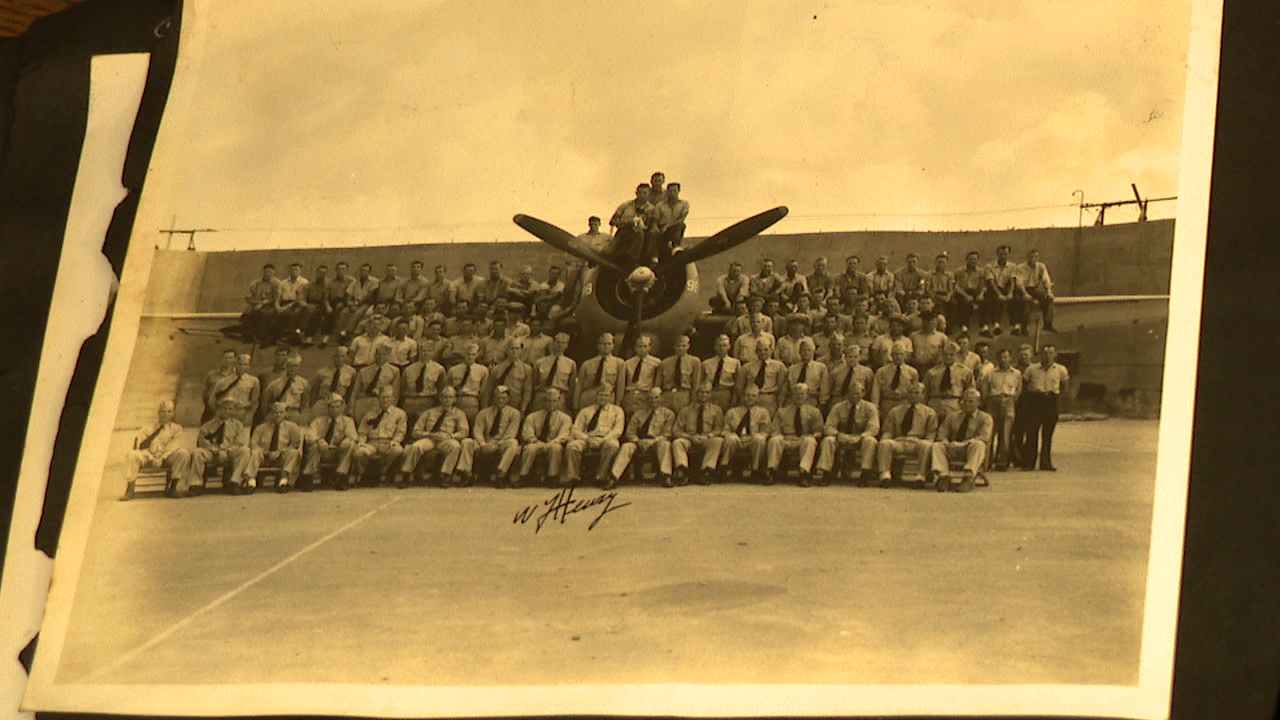 Mays remembers the events that happened eighty years ago as it they happened last year. Especially the war years starting with Pearl Harbor.

“After December the 7th, I decided I would just join up cause I knew I would end up in the service anyway,” said Mays. “Since I had two years of junior college, they assigned me to the aircraft part of it.”

Before heading to Hawaii to catch a carrier to the Pacific to face the Japanese, Mays learned to fly the TBM Avenger, a torpedo Bomber.

“I soloed on April 1st,” said Mays with a chuckle. “I fooled everybody including myself.”

Mays ended up being assigned as a replacement pilot on the USS Yorktown. Mays recalls how ‘green’ he was when it came to bombing enemy ships. He says he missed a Japanese destroyer ship one time and decided to pick an easier target, a slow moving Japanese Merchant ship.

“We came in on what’s known as glide bombing, came in on a 45 degree angle,” said Mays “ We usually came in at 10,000 feet, come in and dropped the bomb. My crew man said we got two to three 500 pound bomb hits on that cargo ship.”

When Mays returned to the Yorktown he got a pleasant surprise from the log books.

“Low and behold, it shows that when the ship was sunk it also landed on top of a Japanese Sub. So I got two for one,” said Mays.

Mays also remembers a close call he had later in the war when his plane was fitted with a new weapon.

“We had just equipped our planes with rockets,” said Mays. “We called them Buck Rogers.”

Buck Rogers was a science fiction character that appeared in newspaper comic strips during the 30’s and 40’s.

“We made a pass at gun emplacements with eight rockets,” said Mays. “On my way down at the dive at the gun emplacement, they were putting tracers past the cockpit.” Mays lifted his finger and swiped it past his ear, “Zup, zup, zup.”

“I put the plane in what’s called a skid,” said Mays “It looks like you are flying straight but actually your path is like you could skid left or right, so I just skidded out of the way.”

Mays’ plane took a few hits before he was able to fire off his rockets. He says he got ride of all of them, except one. It was dangling from his wing.

“I had to come aboard the ship with that rocket hanging lose,” said Mays.

The Captain cleared the flight deck in case the rocket exploded when Mays was landing.

“The most important thing is having the fella upstairs being on your side,” said Mays.

The Lord must have been on Mays’ and the Yorktown’s side that day. Mays said he landed with no trouble and the rocket didn’t fall off and detonate on the flight deck. 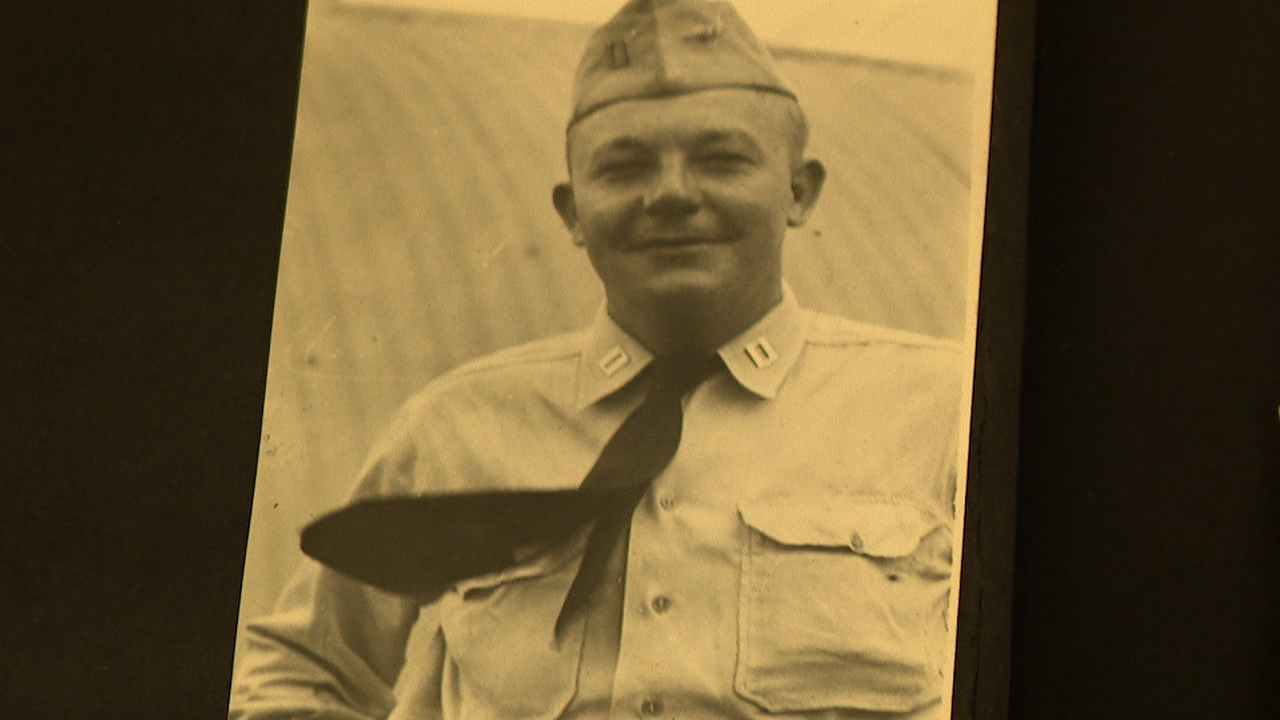 Son David Mays remembers another story Gil Mays would tell people all the time when talking about his service.

“He was in Chichijima as a matter of fact, where our president was shot down,” said Mays. “He was flying two missions on July 4th, almost exactly two months before our president, Herbert Walker Bush was shot down and in the same area. He said there was a lot of fire from the Japanese, a tough spot.” 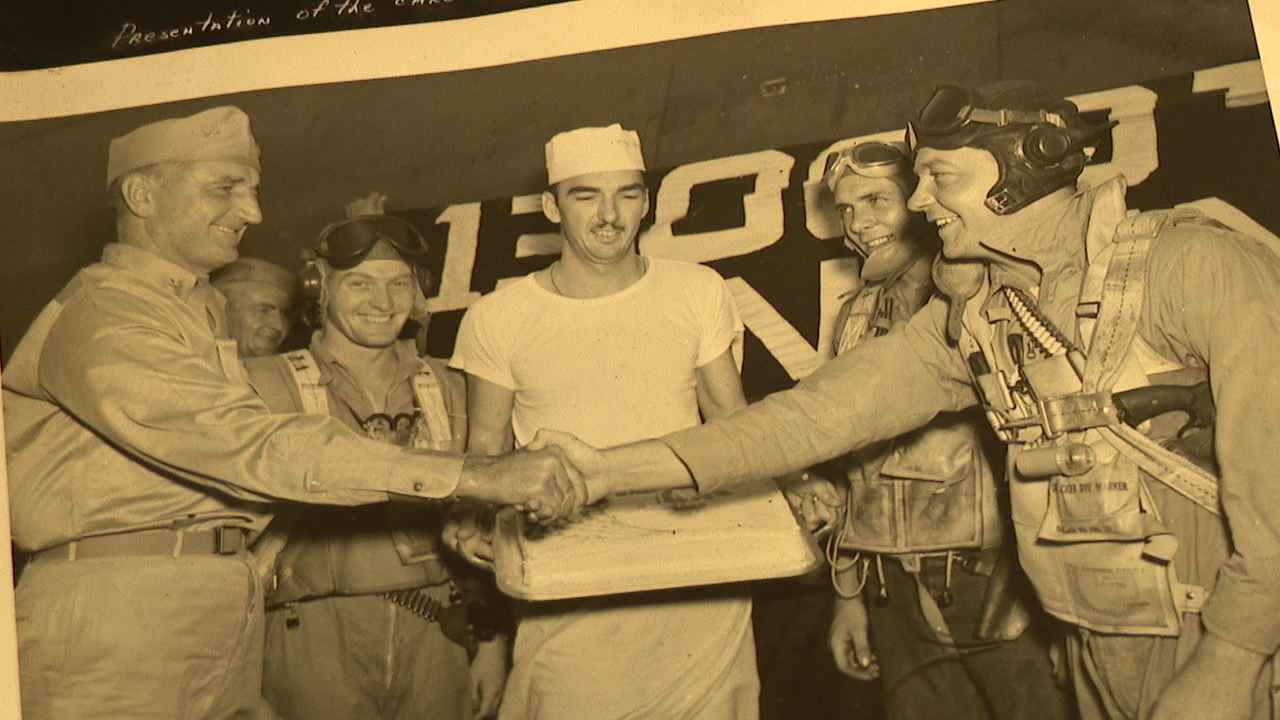 One of the pictures (seen above) in the scrapbook is of Mays shaking hands with the ships Captain and a fellow standing between them hold what looks like a birthday cake. 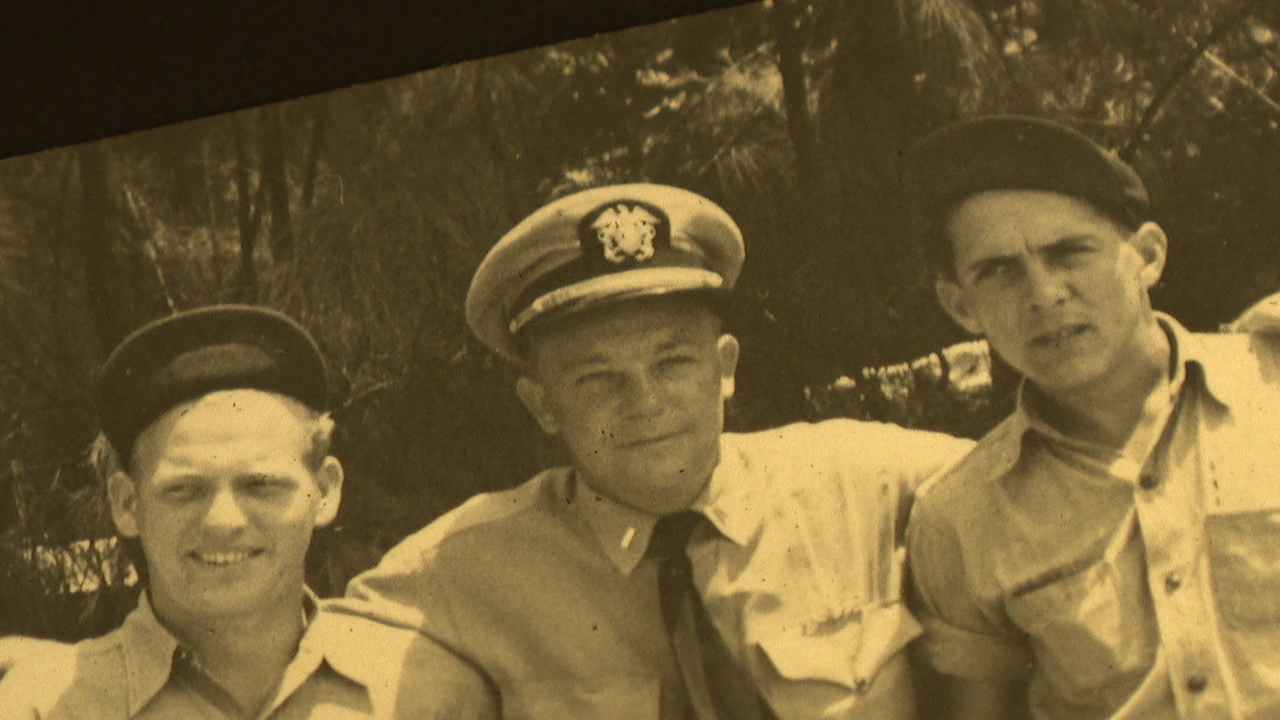 When asked what is was like to grow up the son of a war hero, David said, “You want to cry… I’m so thankful for him… and the people love him and he loves them. He has Just been a good man.”

For more stories about our local veterans, visit theveteransmuseum.org 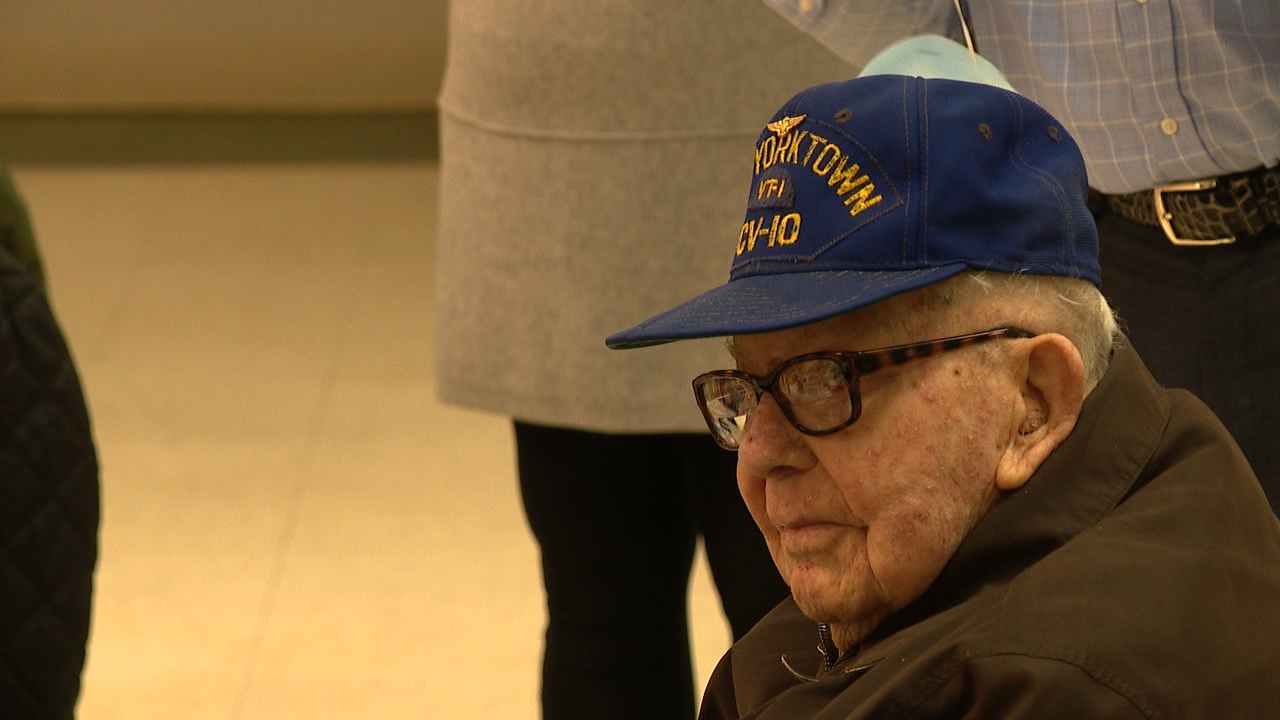 Gil Mays at 100 years old still remembers his time on the U.S.S. Yorktown as if it were yesterday.