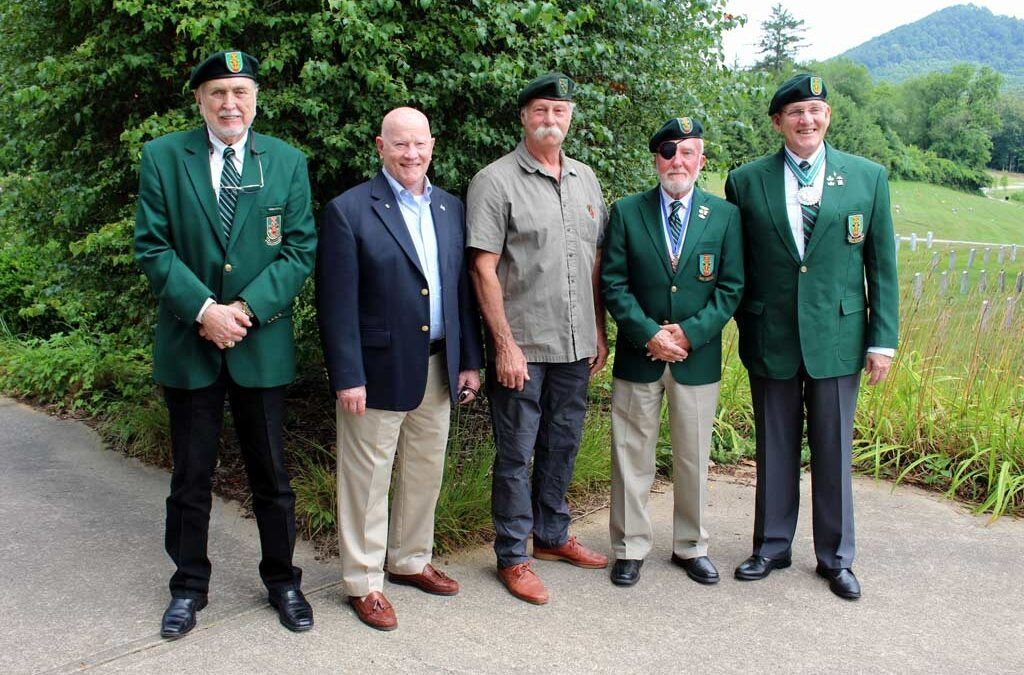 On July 8 and 9, family, friends, members of the community, and military comrades gathered to pay respects to Michael “Mike” Di Rocco of Brevard, NC. Husband, father, friend, parishioner, Marine, Green Beret, adventurer, restaurateur, and volunteer all describe this extraordinary man. As I attended the services held in his honor, I wondered how to say goodbye to a hero and friend.

Served as a Marine and as Special Forces Green Beret

Mike served his country as a Marine in the 1950’s and again in the 1960’s as a Special Forces Green Beret in Vietnam, embedded in the villages of the Central Highlands’ indigenous tribes. His Special Forces team recruited the mountain people and trained them to defend their hamlets against the Viet Cong. Mike served with courage and distinction. His many decorations include the Purple Heart and the Vietnamese Cross of Gallantry with Palm.

At his burial service at the Western Carolina State Veterans Cemetery in Black Mountain, NC on Friday, July 8, Di Rocco was honored by members of Special Forces Association, Chapter 17, who performed the poignant “Final Roll Call” – a tribute paid by soldiers to their deceased comrade.

On Saturday, members of the community joined Mike’s beloved wife, Maggie, and his family at a Memorial Mass at Sacred Heart Catholic Church, celebrated by Father Shawn O’Neal and assisted at the altar by Deacon Pat Crosby and Father Leo Gariazzo, special friends of the deceased.

Mike’s son, Frank, regaled the congregation with stories of Mike’s adventures. In the late 60’s, Mike first heard of parasailing. “My dad thought, ‘Yeah, I have a parachute. I could do that,’’’ Frank said. “He modified his parachute. Then he threw it and a section of mountain rope into the family station wagon.” At that time, I-95 was under construction near their home in Pompano Beach, Florida. “We drove out to the unfinished highway, hooked Dad up, attached the rope to the station wagon, and drove. And lo and behold, there we were on I-95 with Dad parasailing behind us!”

The Transylvania County Honor Guard, led by Ray McCall NCOIC and Chaplain James Boatwright, Capt. and three active duty Senior Master Sergeants from the Fort Bragg Green Berets, performed an honor ceremony which included a three-round volley, the playing of taps, and the folding and presentation of the flag to Maggie Di Rocco.

The service concluded as the congregation sang “God Bless America.”

A Gentleman and a Mentor

Throughout the weekend, I thought of Mike and Maggie Di Rocco, inseparable as together they lived life to the fullest while facing its challenges. Mike was the first veteran I interviewed for my book, “Welcome Home, Brother.” He served on the Board at the Veterans History Museum where he spent hours visiting and sharing stories with veterans from across the nation. Despite living through the brutality of combat in Vietnam, Mike remained a gentleman and a mentor to many. We will never forget him.

Farewell to a Hero

How do we say “farewell” to a hero? There’s no need to do so. Memories of Mike’s courage, patriotism, loyalty, service, love of adventure, kindness, sense of humor, and devotion to church and family live within us. And perhaps, through his example, we might live better lives. Instead of “farewell,” let us say “thank you!” 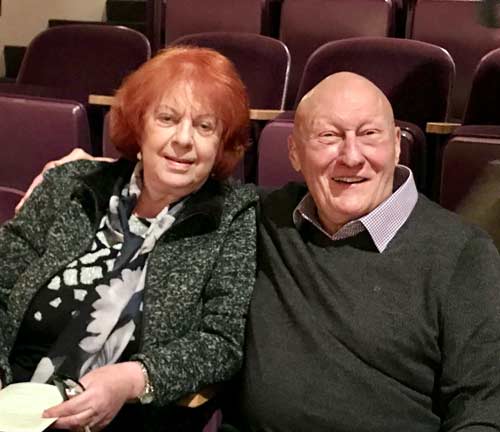 Maggie and Mike Di Rocco at a patriotic concert, Brevard College circa 2018. 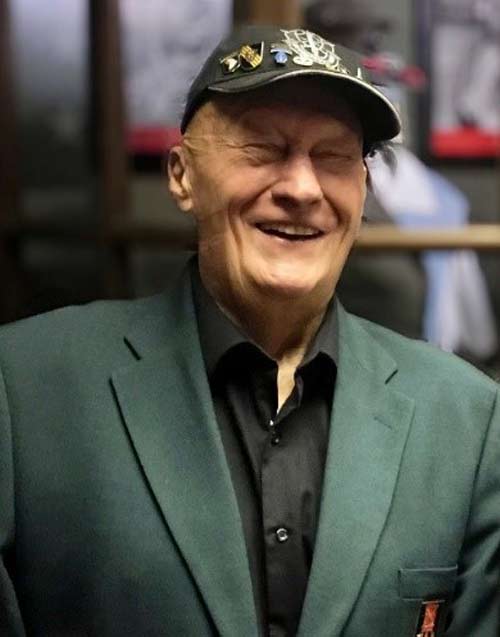 Mike Di Rocco in his Special Forces green jacket, having a good time at the Veterans History Museum of the Carolinas. 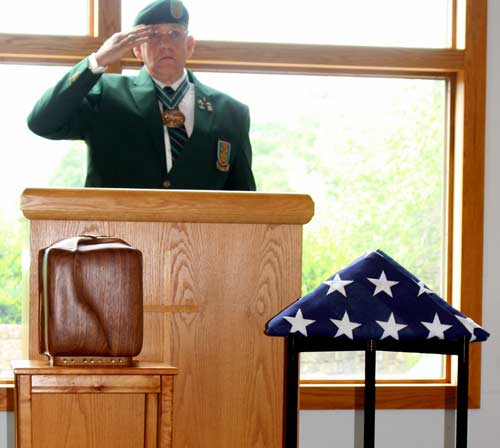 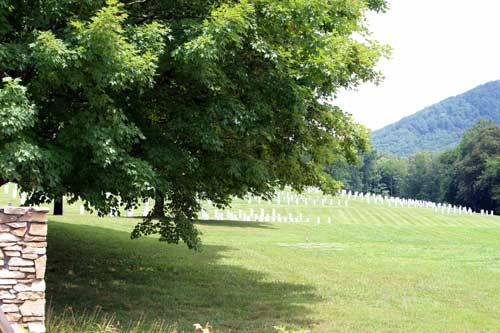 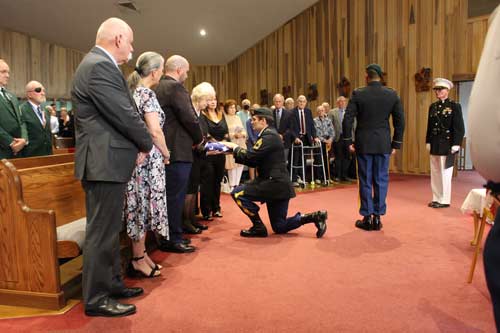 Presentation of the flag to Maggie Di Rocco by a Senior Master Sergeant from the Fort Bragg Green Berets during memorial service at Sacred Heart Catholic CHurch, Brevard. 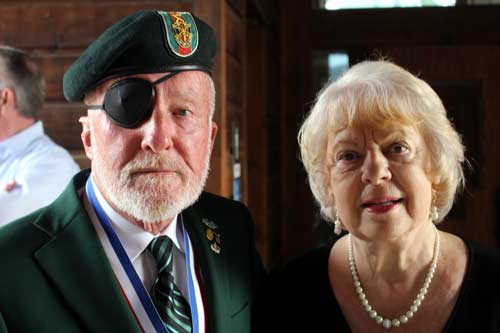 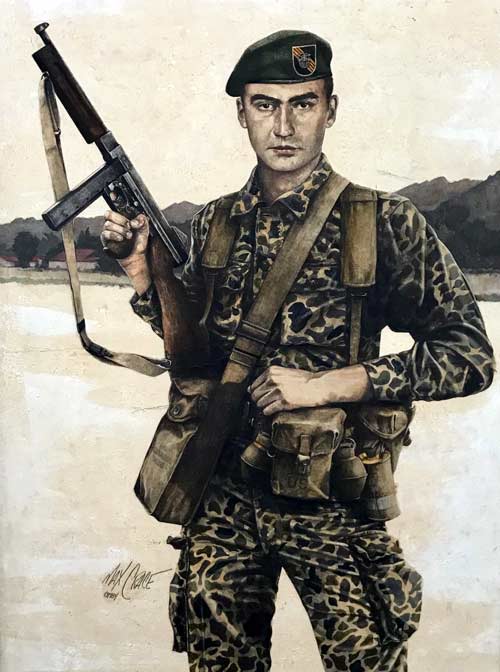 A painting of Green Beret Mike on patrol in the Van Cahn Valley, VIetnam 1965, by military illustrator and painter Max Grace.