When Can We Jump Out of This Plane? 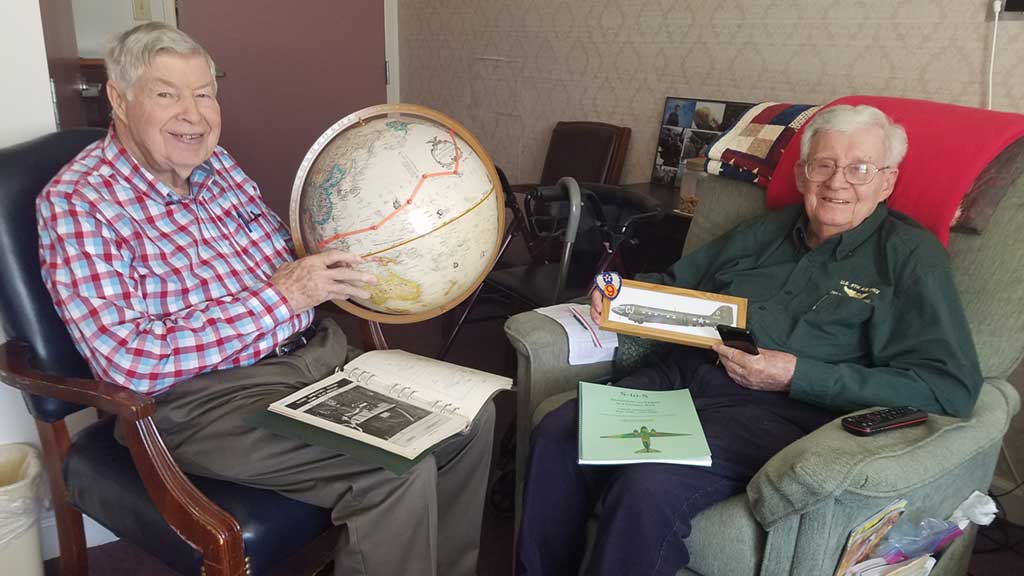 Brevard’s Lieutenant Colonel Bill Clarke (U.S. Air Force, retired) visited 96-year-old Ray Pegram in Rutherfordton, NC to compare stories about flying in the WWII-era C-47 troop carrier. That plane became known as the “Gooney Bird” when it was used in Vietnam. Clarke was navigator flying one from Sacramento to Saigon for use in the Vietnam war.

The two veterans related immediately. Clarke was curious about Pegram’s WWII experience: “What was the mood of those paratroopers?” he asked Pegram, who was a radio operator in a C-47 dropping the 101st Airborne Pathfinder Paratroops into Normandy on D-Day. Pegram replied, “They kept asking, ‘When can we jump out?’ They didn’t much like all that time in the plane. I told them, ‘You watch that light. When it turns green, you can go out that door.’” The two veterans shared a laugh about that. Pegram and his crew made two drops of paratroops into Normandy between midnight and 4:00 am on D-Day, in addition to dropping glider planes and supplies.

Clarke showed Pegram his 1963 flight manual, as well as a globe marked with pins to show the six overnight stops between Sacramento and Saigon. His picture showed that plane painted with camouflage, looking very different from its original WWII paint when Pegram flew in it.

Clarke asked Pegram, “Do you remember the little navigator’s station with that little table?” The two men agreed it was a very small space. Clarke said, “We cut our charts to a small size that would fit on that small table. Then if we needed to go outside that area, we’d just get another map and cut the piece out that we needed.”

Clarke and Pegram were introduced by Janis Allen, a volunteer at the Veterans History Museum of the Carolinas. Museum volunteers arrange meetings like this for veterans to meet, learn about each other’s experiences, and make new friends. These two men served their country two decades apart, but both had vivid memories of that small space inside the C-47 and the missions they accomplished.

The Veterans History Museum of the Carolinas is located at 21 East Main Street in Brevard (next to the courthouse). Admission is free. Open Wednesday – Saturday from 10 am to 4 pm and Sunday from 1 to 4 pm.

The museum’s last open day of 2019 will be Sunday, Dec. 8. After inventory, cleaning, and exhibit renewal, the museum will re-open Feb. 5, 2020. To purchase an Honor Wall plaque for a veteran or to arrange a group tour, please call 828-884-2141 for more information