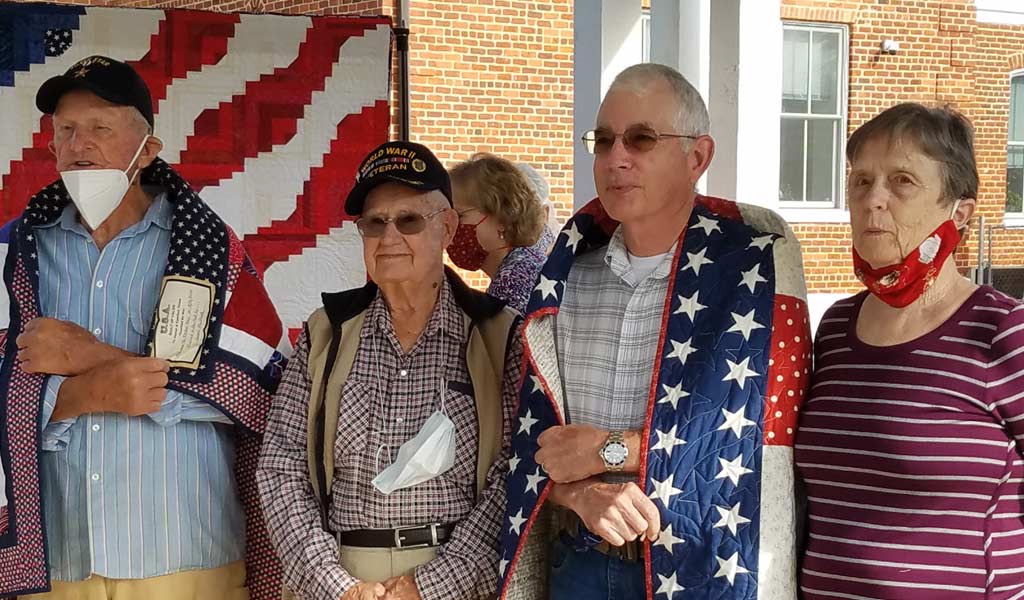 On August 26, 2020, David Morrow and Foster Ray were recipients of a Quilt of Valor at the Courthouse Gazebo.

David Morrow is a US Navy Veteran who served in 1969-70 on a Construction Battalion team of 13 men known as Seabees. They helped rural South Vietnamese populations through training, technical assistance and construction. David’s specialties were surveying, drafting and soil analysis. In the Bien Hoa Province, about 60 miles south of Saigon, his team constructed roads, school buildings, government offices, warehouses, a hospital recovery room and housing units. Their mission was to “win hearts and minds of the Vietnamese people.”

David’s Quilt of Valor was made by Navy Veteran Judy Thurman and Jeani McGrath. It was quilted by Susan Caldwell. His wife Kathy wrapped him in the quilt.

Dave Morrow stated before the ceremony that he was “Grateful for all the men and women in Vietnam who keep the Seabees safe. It took the whole country for them to succeed.”

Foster Ray is a Veteran of the US Army and the Army National Guard serving from 1949-1953 and 1954-1970. He served in The Korean Conflict years of 1950-55 and the Vietnam War, 1961-1975. He served two tours in Germany, in the Company K 26 Infantry Regiment First Division in Bamburg and Asaffensburg. Serving one tour in Korea, he was in charge of security for the largest and Main PX in Seoul, Korea.

During his first tour in Vietnam he was injured in a Viet Cong hand grenade attack and also shot inside a mess hall at midnight. He received the Purple Heart award. He and his unit took out several dozen Viet Cong that night. He was airlifted by helicopter to a hospital in Saigon and remembers looking down and seeing the Viet Cong dragging their dead comrades by ropes back along the trail.

He served a second tour in Vietnam for 1 year and retired with the rank of E8 from the US Army in 1970. He was discharged as a Master Sargent.

Foster received a Silver Star and two Bronze Stars. Foster Ray was very quiet and humbled by the occasion. Foster said, “I really appreciate everything.”

Foster Ray’s Quilt of Valor was pieced, quilted and bound by Jeani Mcgrath. His brother in law, Harold Wellington, another Quilt of Valor recipient, wrapped him in the quilt.

“A Quilt of Valor is the highest civilian honor we can bestow on these veterans.

We thank you for your service, sacrifice and valor. You are not forgotten.”

The Veterans History Museum of the Carolinas is located at 21 East Main Street in Brevard. (beside the courthouse). Admission is free. Currently the museum is closed as guidelines from the Governor of North Carolina are being followed. When the museum is able to open again, social distancing and precautions are in place. Visit our website at www.theveteransmuseum.org to keep updated on our re-opening and learn more about the museum. 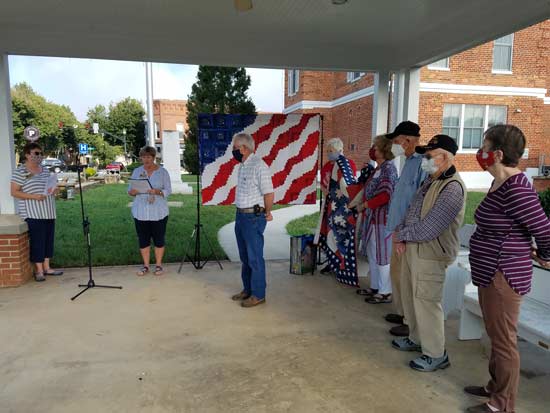 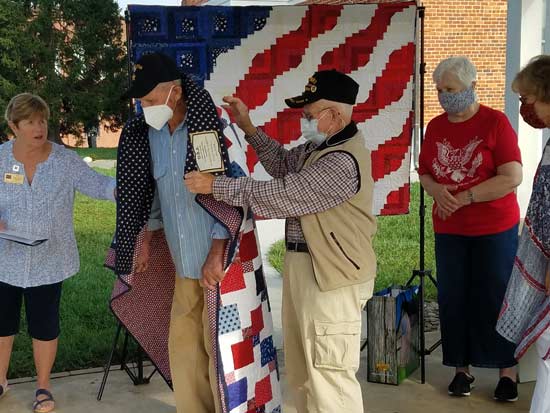 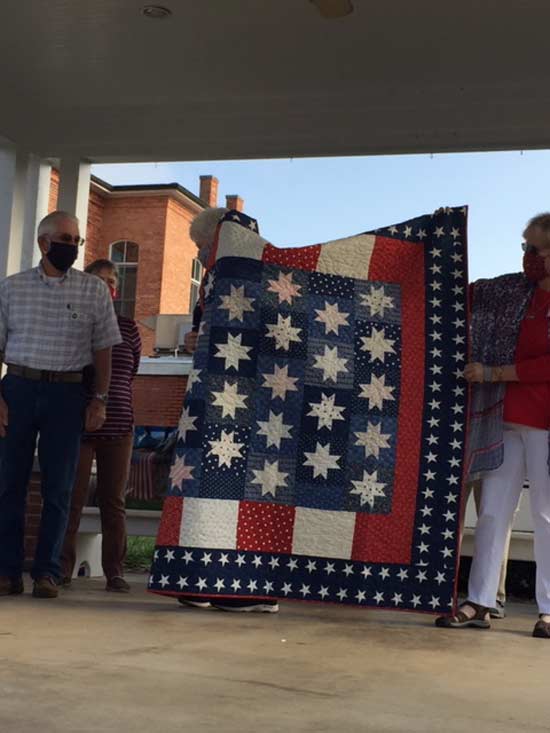