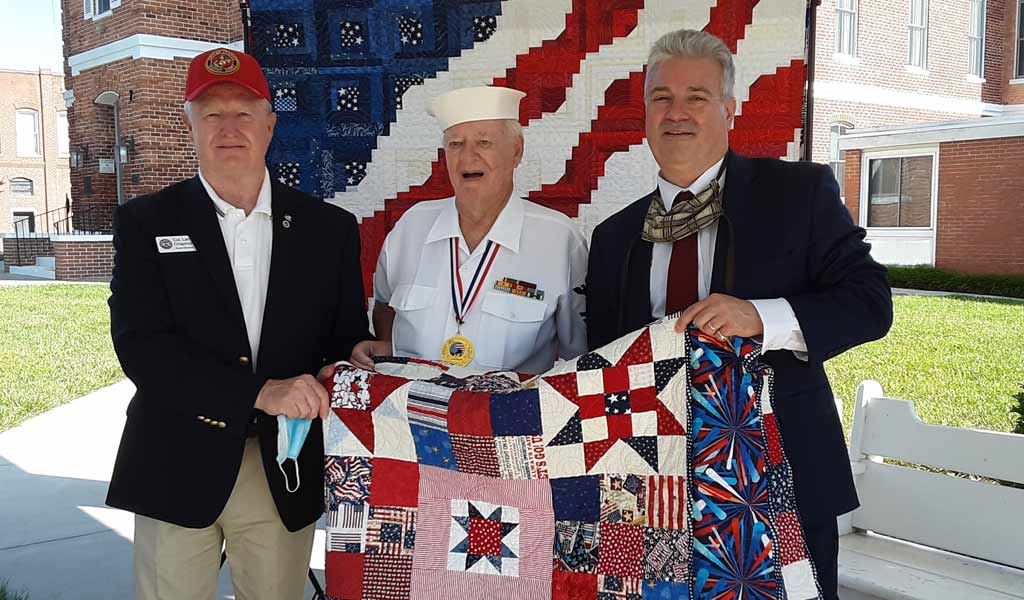 In Brevard on Monday, July 27, 2020 a-long awaited moment arrived for Transylvania County native and Korean War Veteran Charles Holden arrived. It was also the 67th anniversary of the armistice that ended hostilities in the Korean War.

Charles Holden was presented with a Quilt of Valor in a ceremony at the courthouse gazebo. Charles was honored by the presence of Michele Bretz, Commander/Secretary , KWVA, Chapter 314: BG Frank Balzey, opened the ceremony; Mayor Jimmy Harris, read and presented a City Proclamation for Charles Holden; and, Colonel Larry Chapman, USMC-retired, presented a plaque of recognition for the Veterans History Museum of the Carolinas.

Didi Salvatierra and Bonnie Cunningham, represented The Blue Ridge Chapter of The Quilts of Valor Foundation who explained the history of the quilts. Quilts of Valor is a national organization whose members produce hand-made patriotic quilts to honor veterans throughout the United States, Germany, Iraq, and Afghanistan. Blue Ridge Quilts of Valor is a local chapter which conducts ceremonies in WNC. Their group is sponsored by The WNC Quilters Guild. Friends of the Quilt of Valor made the quilt blocks; Terry Shular did the quilting; and, Bonnie Cunningham assembled and bonded Charles’ quilt. 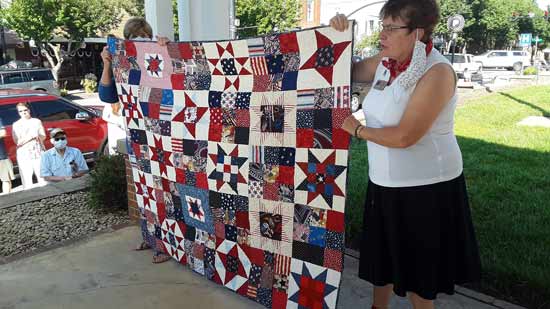 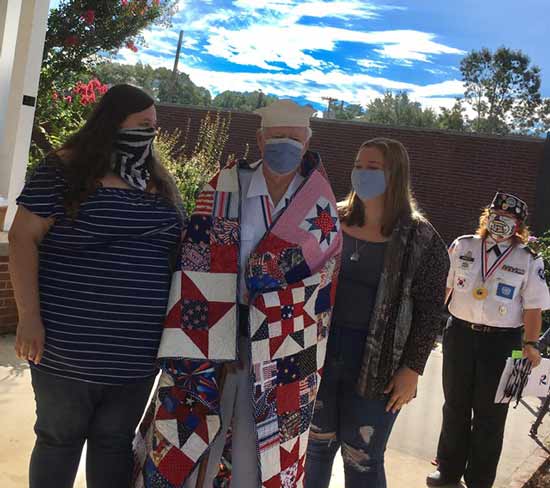 Charles said, “It is just so special.” He had both his granddaughters by his side as they wrapped the quilt around him. A quote from the Quilt of Valor organization is “These quilts are meant to offer comfort to you.” You could see, even behind mask faces, the comfort Charles received when his granddaughters, Taylor Creamer and Tessa Wilson, wrapped the beautiful quilt around their grandfather.

“A Quilt of Valor is the highest civilian honor we can bestow on these Veterans.
We thank you for your service, sacrifice and valor. You are not forgotten.”
Charles Holden joined the US Navy in March 1953. He was deployed to Korea in July of that year aboard the USS St. Paul (CA 73). The St. Paul fired the last shot at North Korea on July 28, 1953. This same ship fired the last shot at Japan in August, 1945.

Charles left St. Paul in December 1954 and joined the crew of the USS Toledo (CA 133) in Japan. This ship operated off the coast of Korea, Japan and China. After serving on the USS Toledo for a year, he joined the crew of the USS F.D.R. (CA 42). In June 1956, the F.D.R. left Washington State, traveling around Cape Horn and up the Atlantic to Mayport, Florida. In June 1957, he served two years in El Centro, California.

Charles rejoined the Navy in August 1962 aboard the USS H.J. Thomas (DD833). The ship operated off the coast of Japan, China, and Vietnam until late 1965 when he reported for duty in Charleston, SC. In 1967 he joined the crew of the USS Ranger (CVA 61) off the coast of Vietnam. Upon leaving the Ranger in November 1968, he was discharged a second time.

Charles worked as a Machinist Mate 2nd Class throughout his years of service 1953-1968 during both the Korean conflict and the Vietnam War. Charles has been instrumental in retelling his story of his military history throughout the county, so we will never forget the Veterans who served for our freedom.

Charles is a member of the Korean War Veterans Association and the Veterans of Foreign War Post 4309 in Brevard.

By Joni Pavlik
Pathfinder, Veterans History Museum of the Carolinas