Sacramento-to-Saigon in a Gooney Bird 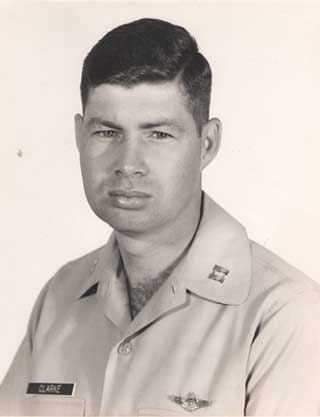 on Thursday, September 26 at 2:00 pm at the Veterans History Museum of the Carolinas. He will tell stories of his Pacific adventure: one-third around the world in a Gooney Bird and back in a Pan American Boeing 707, from Glasgow Air Force Base, Montana.

The “A” stood for “attack” in his case, with three Gatling guns mounted in the fuselage. The pilots, navigator, and crew chief met at McClellan AFB, California in Sacramento. Their simple, small, 21-passenger twin-engine World War II aircraft crossed the Pacific, landing at five islands for rest and refueling, and logging 51 flight hours. Clarke will tell this story using slides, maps, and stories.

William Clarke joined the U.S. Air Forces in 1956 as an aviation cadet after two years at the University of Tampa. He graduated as second lieutenant with the aeronautical rating of navigator in 1957. He flew for five years in a B-52 as electronic warfare officer (EWO) crew member and instructor. At University of Pittsburgh, he earned his bachelor’s degree in aeronautical engineering. He had a six-month deployment at Guam as logistics officer in support of B-52 bombing of Vietnam. He flew in a DC-130 aircraft in 1968 and was sent to Georgia Tech for a mechanical engineering master’s degree.

Jamming of enemy radar over Vietnam

Clarke was back in the cockpit again for EB-66 electronic jamming of enemy radar over Vietnam. He retired in 1978 with 22 years of active service as a Lt. Colonel. He worked in engineering in Tampa for 11 years, then earned a PhD in Experimental Psychology. He taught speech pathology and experimental psychology for 11 years.

In Brevard, Clarke volunteers at Transylvania Regional Hospital and serves as chaplain for the Transylvania County Honor Guard. He is married to the former Marianna Johnston. They have three daughters, fourteen grandchildren, and twenty-two great-grandchildren. The Clarkes are active members of First Baptist Church in Brevard.

The Veterans History Museum of the Carolinas is located at 21 East Main Street in Brevard, beside the courthouse. Admission is free. The museum is open Wednesday – Saturday from 10:00 am to 4:00 pm and Sunday from 1:00 to 4:00 pm. To purchase an Honor Wall plaque to honor a veteran or for more information call 828-884-2141 during open hours.