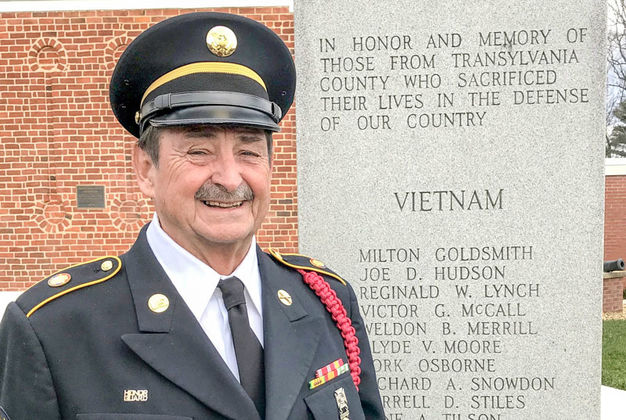 Brevard native Jimmy McKinney was married and working at the Ecusta plant when he received his draft notice in May 1966.
“There were a lot of us from Transylvania County,” McKinney recalled. “It was the biggest draft since the Korean War, taking guys that were married. They called us the old guys because we were 24 and 25. We didn’t know if we were coming back or not. It was by the grace of God that we did come back.
Basic training during July and August at Fort Jackson in South Carolina was excellent preparation for a young man soon to be travelling through dense, humid jungles.
“It was unbelievably hot,” McKinney said. “If the temperature reached a certain point, they allowed us to unblouse our fatigues from our boots, so we didn’t pass out and have to be carried back to the barracks. The climate prepared us for Vietnam.”

Not Your Father’s Howitzer
McKinney was trained in artillery and sent to Fort Sill, Okla., for Advanced Individual Training (AIT) on the M114 155mm howitzer.

“We were formed as the 1st of 27th Artillery which was a 155 mm self-propelled (SP) unit,” he said. During WWII, the 155mm howitzer, nicknamed “Long Tom,” was a towed artillery weapon. Self-propelled artillery guns debuted in Vietnam, replacing the towed howitzers. The tactical advantages of the SP system were greater mobility and flexibility. The gun could stop at the desired location and begin functioning immediately, and then quickly move to a new location before its position could be located.

“The self-propelled system was brand new,” said McKinney. “We knew it meant we were going to Vietnam, to a combat zone.”

The trip to South Vietnam was long and arduous for McKinney. The battalion travelled by train from Oklahoma to Oakland, where they boarded a ship to Vietnam.
“We travelled for a month through the Pacific, stopping in various places and assuming all sorts of duties to keep us active,” he said.
The ship stopped for one night in Okinawa, where 5,000 troops disembarked. McKinney’s battalion continued to Vietnam.

“I don’t do well on water,” said the seasoned Army veteran. “I had an entire month of seasickness, which I don’t even like to remember. To make matters worse, we left Okinawa right after a hurricane had hit. The ship was pitching and rolling, and waves were crashing onto the deck.”
Although it was a relief to set foot on terra firma in Vietnam, the troopers were concerned because they reached Vietnam weeks before their weapons and equipment arrived.

“It was scary,” McKinney said. “We were headed for the jungle and we didn’t have any weapons. We were at the mercy of others to guard us until our equipment showed up.”

“The 1st Infantry Division was on foot in the jungle, scouting out Charlie,” he said. “When they got into dangerous situations where they needed more fire power, they called in the gun sections as well as the Air Force planes. It was a big outfit with a lot of teamwork.”

McKinney’s howitzer battalion was always on the move.

“We might spend a half-day in one location, then travel to wherever the 1st Infantry Division needed us next. We loaded our ammo onto 5-ton track vehicles and quickly got in ranks to move out,” he said.

Often, the artillery group would travel all day, building sleep bunkers at night before they could finally rest. The travel-weary soldiers filled sandbags with dirt and covered them with PSP (pierced steel planking used on Air Force landing strips) as a roof, leaving openings to fire if necessary.
“It was frustrating because we were exhausted, but we didn’t want to sleep on the ground and get mortared or injured from artillery that was off course,” he said.

Firing A Howitzer
As a Specialist 4th Class, McKinney drove the howitzers and served as assistant gunner. In Vietnam there were six gun sections in the battalion with three men on each gun: the gunner, the assistant gunner and the ammo guy. Different fuses were used on the projectiles, such as a point detonator or a fuse timed to go off in the air. Howitzers shoot upward and often gunners are unable to see their targets.

“We never knew until the mission came down exactly what charge we were firing, getting all our reports from the forward observer,” McKinney noted.

The 155 mm howitzer fired separate-loading bagged-charge ammunition with up to seven different propelling charges, from 1 to 7. Projectiles were about 100 pounds and travelled roughly 13 miles with the maximum 7 charge.

“You’d load the projectile and use the size charge for the distance that you wanted to fire,” said McKinney. “The ammo fit into the tubing just right, and we inserted the powder right behind it, with a little primer. When they called for fire, we’d jerk the lanyard and the projectile was on its way. Spotters directed our fire power, giving us different coordinates and azimuths to keep us on target.

“The bombing went on all night. It was nothing to fire 200-300 rounds. Of course, our howitzers were targets, but usually there was infantry on our perimeter that protected us. Trees would fall as the little tanks continuously fired into the jungle, clearing a path in no time.”

Driving A Howitzer
The battalion named each of its six howitzers. “I was the designated driver of Cyclops,” said McKinney.

“Interesting” is how he described maneuvering the 32-ton artillery piece made by General Motors.
“It had something like an automobile’s steering wheel,” he said. “You could gently turn it and the howitzer would make a big sweeping turn. It was like an automatic transmission.

“We were usually on the main roads with infantry or guys in personnel carriers guarding us while we travelled, so we wouldn’t be overrun. And naturally, they had minesweepers. We couldn’t travel until they’d cleared the road. We never really knew how long it would take to get to a location.

“The roads were mainly dirt, creating a lot of dust until the monsoon season set in. Then they were nothing but mud. We had to be extremely careful so that the howitzers wouldn’t get stuck. If we couldn’t get to the infantry because of the mud, they had the Air Force to protect them, dropping napalm bombs. Often we were so close that we could feel the heat of the bombs.”

In January 1968, during the Tet Offensive, the heaviest and most sustained fighting of the Vietnam War, the Big Red One was situated close to Cambodia.

“Watching the helicopters bring out howitzers and artillery pieces with tracks blown off and white sheets over them brought tears to my eyes,” said McKinney. “I knew a lot of guys had been blown up. It was terrifying.”

Rubber Trees And Banana Plantations
Two sights that captured McKinney’s attention were the rubber trees and the banana plantations.

“We often stopped on the road beside a banana plantation,” he said. “I must be part monkey because I have always loved bananas. I wanted to go get one, but we couldn’t get out of the howitzer. And it was always neat to see the rubber trees which were considered sacred by the Vietnamese people. You didn’t shoot at a rubber tree. There was a price to pay because they were prized possessions.”

McKinney recalled passing little grass huts as his division travelled through small villages, unable to determine whether they were friendly or dangerous.
“It was crazy,” McKinney remembered. “These tiny villages had access to American Coca Cola and the villagers would sell us a coke for a buck. I have no earthly idea how they got them, but I bought some for sure.”

Respect For The Men in Charge
“We had some great officers,” McKinney recalled. “Everyone respected our captain who did everything he could to take care of us. There was no saluting in Vietnam because if Charlie was watching we didn’t want anyone to realize who was in command. And the sergeants were terrific; they had a lot of experience under their belts.
“Back then I was a very heavy sleeper. I could sleep through anything. When we had a red alert attack with incoming mortars or rifle fire, there was one sergeant who always woke me up so that I made it into the bunker. Our sergeant in command was also a fine man. They sent him back to base camp to return to the states. But the base camp was mortared, and I don’t think he made it home.”

Home Again
McKinney returned to the United States in March 1968. Because Saigon was under attack, the battalion flew home out of Bien Hoa, flying first to the Philippines and then to Oakland. He remembers the flight fondly.

“It was the era of the mini-skirts,” he chuckled. “Getting on that plane and seeing those stewardesses in miniskirts was mighty nice to us young guys. Good for the eye. We’ll leave it at that.”

After a delicious steak dinner, compliments of the U.S. Army, and his discharge, McKinney flew into Asheville. He and his wife, Helen, had planned to spend time on the beach in Florida, hoping to maintain a low profile.

“But I had to go home first. I had a good friend who was a paratrooper who landed on a land mine during his third tour,” he said. “He didn’t make it, so I went home to see his family.”

Fortunately for the McKinneys, they did not encounter protestors.

“There certainly weren’t any parties for me,” he said. “Nobody thanked me, but I wasn’t treated badly.”

Thirty years ago, McKinney and his son, Brian, visited the Wall in Washington, D.C.

“I thought it was a great memorial. It was so well organized, with all those names and dates. I found the name of a friend from Hendersonville, Charles King, who was newly married with a pregnant wife when he left for Vietnam,” he said. “I found Weldon Merrill, my paratrooper friend and some men I’d been close to. It touches your soul when you see their names on the wall.”

Today, Jimmy, a retired electrician, and his wife, Helen, live in Brevard and are active at Pisgah Baptist Church. Jimmy frequently honors his fallen comrades as a member of the Transylvania County Honor Guard.

“The Honor Guard is terrific. They’re all my brothers and sisters,” he said.

“She has us wrapped around her little finger,” McKinney commented. “She’s really active and mischievous.”

A Band Of Brothers
Of his tour in Vietnam, McKinney has no regrets.

“It was exhausting, but it was worth it,” he said. “I feel that I was defending our way of life.”

And, like veterans of all wars, McKinney speaks respectfully of his comrades. “ 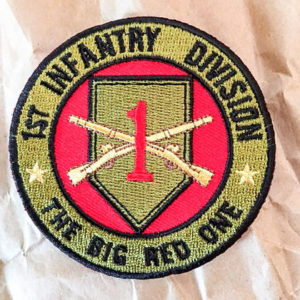 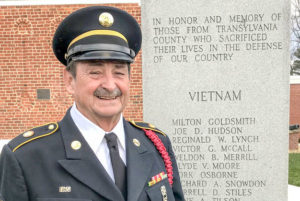 Jimmy McKinney stands by the memorial in front of the Transylvania County Courthouse.

U.S. soldiers on a 155mm howitzer in South Vietnam.