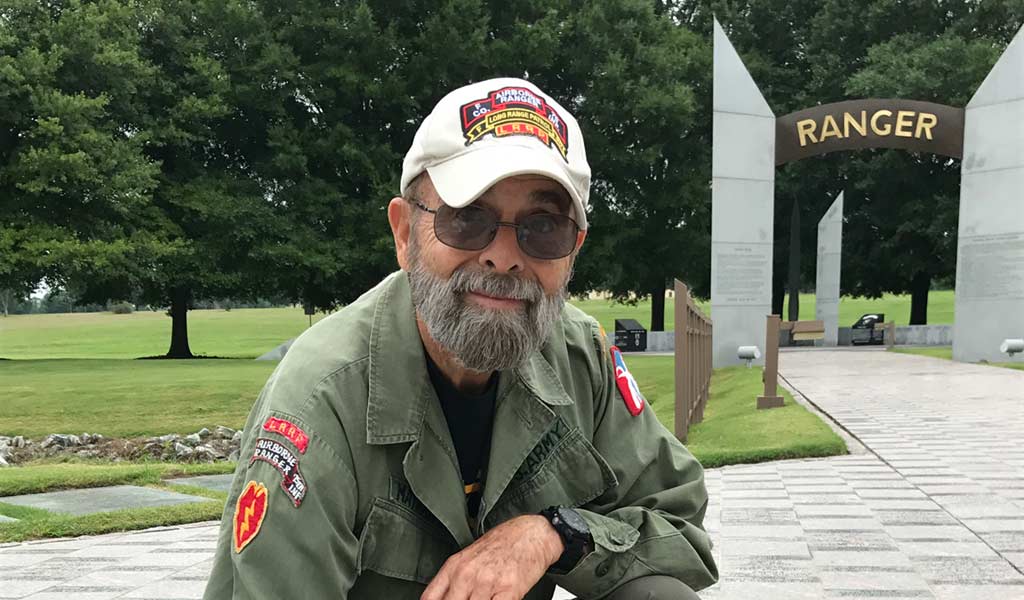 Not all that happens in war is sad/grim/ugly.

In 1969 while I was in Co. F, 75th. Inf. Rangers, several Ranger LRP (Long Range Patrol) Teams were sent TDY  (temporary duty) to Tay Nihn.  We were treated like ‘redheaded stepchildren’ with regard to facilities from which we would deploy Ranger Teams in that AO (area of operations).

We were billeted  in an area aboard Tay Nihn (a/k/a ‘Rocket City’) that had a few old hooches, no bath or chow facilities, water, or electricity.  Our ‘acquisitions man’ soon came up with a ‘spare’ generator for electricity.  We had an elevated  wing tank for showers, but, no water.  We had to beg for chow in various chow halls and make up the rest as we went.  Right beside our tiny compound was a fairly large Army Signal (communications) group…they lived and worked in air-conditioned bunkers and had complete facilities including a chow hall.

After my first mission from Tay Nihn, a group of us on stand down were having a few beers and came up with a solution to our problems.  We had a fairly large supply of CS gas grenades, the wind was just right, so we quietly lined up on the perimeter  of the communications compound and proceeded to gas the heck out of them!

We ran like hell, laughing the whole way back.  We were all in the command hooch passing a bottle around and telling lies.  The Senior NCO in charge of us was a E-7 named Karobowski.  Shortly after that, the first Sargent of the communications unit knocked on the hooch door and asked who was in charge.

Karobowski  spoke up.  The communications first sergeant announced with a growl: “Sarge, we’re having a company picnic tomorrow and we want ya’ll to come.  We have a great chow hall you can use anytime, as well, we have flush type toilets and hot showers that you are welcome to use.  In fact, you guys can have practically anything you want from us as long as you’ll promise not to gas us again!”

On another tdy  assignment, several Ranger Teams were sent to a tiny Navy PBR (Patrol Boat, River) base called Tra Cu that was very remote and only accessible  by helicopter or by water.  Again, we were “low man on the totem pole” and had very little in the way of needed facilities.  Begrudgingly, the Navy fed us and housed us in a couple of old hooches.

The problem was they didn’t want to sell us beer when we came in on stand down between missions.  The Navy had a little screen room beer bar that we used even though the reception by the Navy guys for us was cold.  My Ranger Buddy, Bob Newsom and I cooked up a solution.  We defused a 28mm grenade (and, for safety, tested it to make sure it was safe), and then reassembled it by putting the ‘spoon’ and pin back in place. So Newsom and I went to the beer bar for a few beers.  After we had consumed a few beers, we proceeded to fain an argument about one owing money to the other.  We kept ramping the ‘argument’ up until the entire bar was watching the LRPs (pronounced “lurps”) as we were the only ones in camouflaged fatigues and were considered crazy to begin with. Newsom holds the spoon down and pulls the pin out and puts the grenade on the booth table and says if I don’t pay up he’ll throw the grenade.  At that point, I said, “Hey, I don’t care, I carry a half case of grenades to the field on every mission…go ahead and throw it!”

At this point, all the Navy guy’s eyes are as big as saucers. Newsom then ‘pops the spoon’ and throws the grenade in the center of the room.  The Navy guys almost tore the screen room down trying to get away from the grenade.  After that, we never had any problem getting all the cold beer we wanted from the Navy!