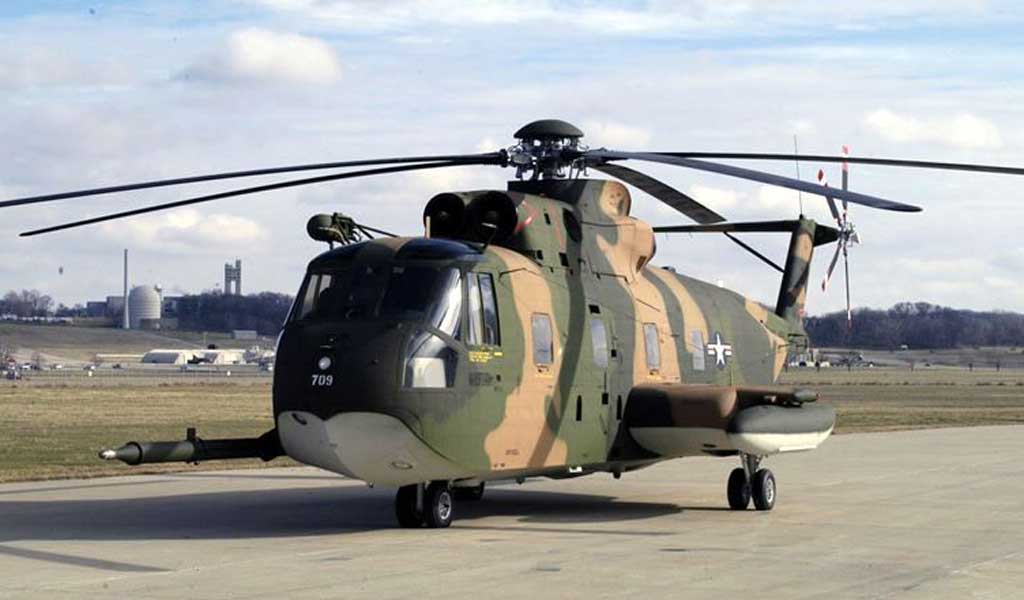 Smoke streamed from an Air Force F-105 Thunderchief as it flew south toward the demilitarized zone separating North and South Vietnam.  It was the afternoon of 1 July 1968 when its pilot, Air Force Lieutenant Colonel Jack Modica, made his decision to eject.  His aircraft was losing altitude rapidly, and he knew he would never make it across the line.  After calling in his position, he punched out seventeen miles northwest of Dong Ha.  The low-altitude ejection left him unconscious on the floor of dense jungle.  When he came to, he could not move—the hard landing had injured his back.  He made sure his emergency-locater beacon was on.  Looking up at the thick jungle canopy, he could only wait.

Two 37th ARRS HH-3E helicopters lifted off the pad at Danang Airbase and headed north.  When the Jolly Green Giant helicopters arrived on-scene, they were driven off by heavy ground fire. With darkness rapidly approaching, another rescue attempt was made an hour later.  The pilot, Lieutenant Commander Lonnie Mixon USCG, was at the controls of “lowbird,” the primary recovery helicopter.  When he made his approach on the downed pilot’s location, he took several hits and had to pull out.  Mixon evaluated his damage and went in for a second try; he was met with even more intense fire.  The helicopter’s electrical system was knocked out, a hydraulic line was ruptured, and the fuel tanks were hit.

Faced with leaving Modica in the jungle overnight, Mixon decided to take the damaged helo in for one more rescue attempt.  With darkness settling over the jungle, he brought the helicopter around and headed in.  Enemy tracers, streaking through the night, found their target and the helo was hit again.  Mixon broke off and headed his crippled “Jolly” for home.  Rescue operations were suspended for the night.

Hold on…did you see “USCG” after Mixon’s name?  What was a ‘Coastie’ doing in a Jolly Green Giant?  During the Vietnam War, the Aerospace Rescue and Recovery Service (ARRS) of the U.S. Air Force employed Sikorsky HH-3E helicopters in combat rescue operations.  To provide expertise in overwater rescue operations and to supplement the number of qualified aircraft commanders, the Air Force requested the assistance of the U.S. Coast Guard.  Coast Guard helicopter pilots assigned between 1968 and 1972 (from among more than 80 volunteers) included Mixon. 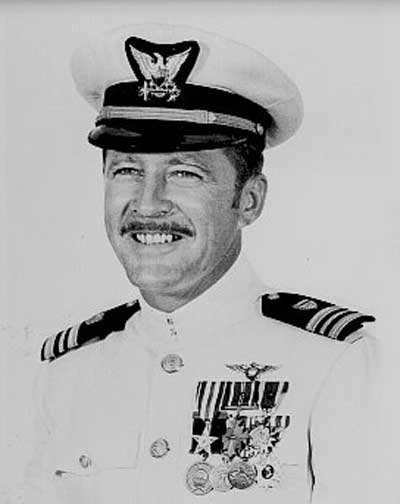 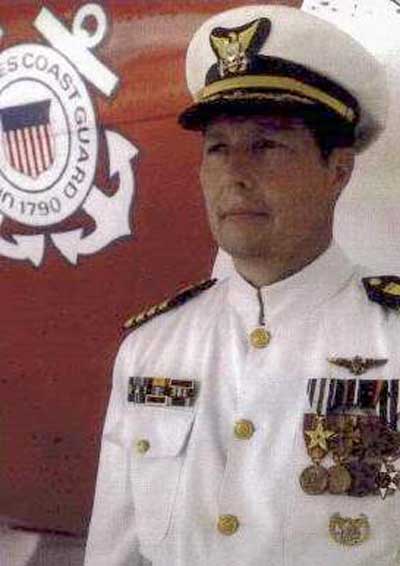 At daybreak, two Jolly Greens were again launched.  When they reached Modica’s position, the enemy was waiting; North Vietnamese Army (NVA) gunners had moved into the area in force.  Ground fire, much heavier than the day before, greeted the helicopters.  An A-lE Skyraider flying cover for the mission was hit and went down, killing the pilot.  Helicopters – one with an unexploded B-40 rocket lodged in a belly fuel tank – were pulled out of the area while fighter-bombers came in to pound the enemy positions.

A debrief of flight crews involved in rescue attempts indicated that Modica was on the floor of a small valley under a thick jungle canopy.  Crewmembers said that NVA gunners were positioned close to the pilot’s location.  Fire had come from all around and directly below their helicopters.  The North Vietnamese apparently were using the injured pilot as bait; as long as he was alive and free, they knew that Americans would keep coming for him.

Flight crews agreed it would be foolhardy to put a pararescueman on the ground to help Modica—the rescue helicopter pilot would have to do the job.  He would have to lower the jungle penetrator— a 26-pound bullet-shaped device with three narrow folding paddle seats—close enough for Modica to reach and pull himself aboard.

Three hours after Mixon’s second rescue attempt, two Jollys took off from a forward strip just below the DMZ.  In one helicopter Coast Guard Lieutenant Lance A. Eagan was flying “low bird.”  “High bird” would be his backup.  “As soon as I entered the area,” Eagan later said, “I came under very heavy antiaircraft fire from 37mm guns.”  The aircraft was shaken by airbursts while dumping fuel to lighten the load.  When Eagan got over the downed pilot’s location, he said, “It was impossible to see him because of the dense jungle. But we could see smoke he was sending up.”  Unfortunately, the smoke was scattered as it filtered up through the jungle making it impossible to pinpoint the pilot’s location.  When low bird got closer, Eagan made radio contact with ‘Scotch Three,’ Modica’s call sign.  The downed pilot told him, “I’ve got a broken back. I can’t move.”

Enemy gunners held their fire while Eagan closed in on Modica’s position and went into a low hover.  He used his helicopter’s rotor blades to clip off the soft tops of the jungle trees in an attempt to see through the canopy and spot the pilot.  When the crew still could not locate Modica, Airman First Class Joel Talley, the mission’s pararescueman, volunteered to go down and look for him.  The twenty-year old Talley, on his first mission, said he would find the pilot and get him to a place from where he could be lifted.  Despite Eagan’s reluctance to put Talley on the ground, he realized it was the only way to get the injured man out.  Eagan also knew that as long as his helicopter was flying, he could not leave without his crewman.

Talley was lowered into a small clearing near where smoke was sighted; he disappeared into the jungle.  The pararescueman spotted Modica when the pilot fired a pen gun flare. Talley reached the man, who was becoming delirious, and treated him for shock, while Eagan repositioned the helo for the hoist.  With the hoist cable down, Eagan’s Jolly Green was committed to a stationary hover just over the tree tops.  The penetrator was lowered again and Talley carried the pilot to it.  He quickly strapped Modica and himself onto the paddles and signaled for pickup.

The first bullet smashed through the center windshield, passing between Eagan and his co-pilot; it came from a North Vietnamese sniper in a tree directly ahead of the helo.   Eagan said, “When the bullet hit, I could see shattered Plexiglas coming toward me in slow-motion.  It was a stop-motion sensation, then everything went back to normal.  I’ll never forget that part of it. Then,” he said, “the whole world erupted.  They opened up with everything. They were shooting at us from every angle.”  He could hear the hits.  He said, “They sounded like very dull thuds.”  With the helicopter rocked by gunfire, Eagan waited until the penetrator cleared the jungle.  “Once they were above the tree liner” he said, “I took off with the two of them swinging fifty feet below the aircraft.”

Eagan landed the helicopter at Dong Ha, where the rescued pilot was taken to the hospital.  Eagan said, “When I got on the ground, I counted forty hits in the aircraft.  I guess they were intent on stopping us.  I had several hits in my rotor blades.  A few more inches either way and my Jolly would have gone down.”  There were nine hits in the helicopter’s fuel tanks and four of the five rotor blades were hit.  The helicopter had to be airlifted back to Danang.

In November 1968, bombing in North Vietnam was halted while negotiations to end the war were in progress.  Eagan was transferred from Danang to Nakhon Phanom, Thailand, where they were assigned to Detachment 1 of the 40th ARRS at the Royal Thailand AFB.  The detachment’s nine Jolly Greens supported clandestine bombing strikes against the Ho Chi Minh trail, passing through Laos.  Jollys stood “strip alert” at the airbase or were deployed into Laos to Air America strips, known as “lima sites.”  Eagan said, “When we went into Laos, we had to cover the ‘stars and bars’ on the helo and remove all insignia from our uniforms.”  While in Laos, Eagan made the ARRS’s 1500th combat save.  Reports of the mission to the media made no mention of location.  When he received a Distinguished Flying Cross for another mission in Laos, the Air Force sanitized the citation to remove any specifics of the rescue.  The award simply stated that he was “audacious and tenacious in the face of opposing hostile fire.”

Lance Eagan retired with the rank of captain, and died at age 53 as a result of exposure to Agent Orange.  A 1962 graduate of the U.S. Coast Guard Academy, Eagan is a member of the Academy’s Hall of Heroes.  Lonnie Mixon survived until 2013.