Serving in the Coast Guard on Both Coasts 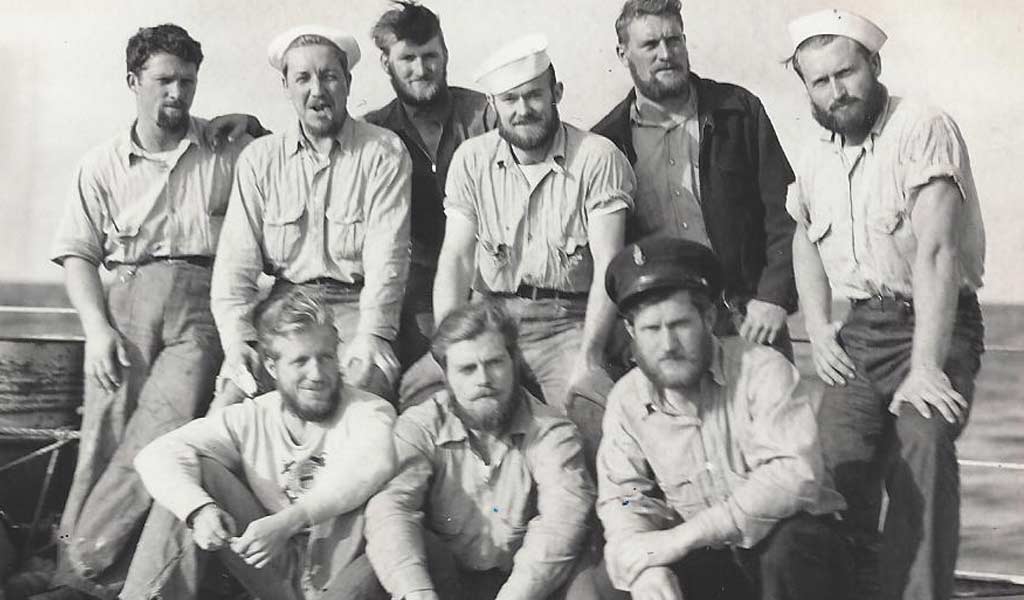 John, standing, third from left with his Coast Guard buddies

John was in the Coast Guard before and during World War II. When the war started, he was based in San Juan, Puerto Rico. His wife-to-be, Laurel Crawford lived in Jacksonville, Florida. They met when John’s ship was being refitted in a Jacksonville shipyard. 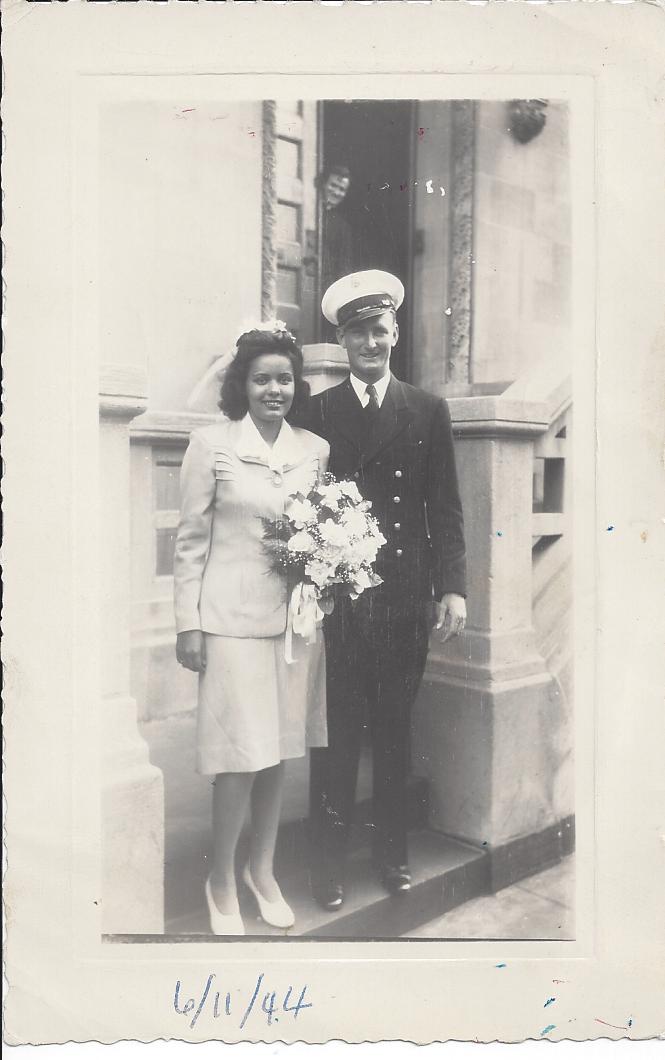 “When I joined the Coast Guard it was a commitment for three years. Navy was four and the Coast Guard was three. We went on board a ship [The Northland] and they just trained us on the ship. Mine was a ship that traditionally went up to Alaska and the Bering Sea and the Arctic Ocean—an icebreaker. Every year it made an annual trip and stayed up there all summer.

“We visited Nome, Ketchikan, Juneau and Dutch Harbor. And the Aleutian Islands and Southeastern Alaska. I remember one time I went swimming in the Arctic Ocean with some of my shipmates. We just swam out from our ship. Ice-cold water! We didn’t stay in long, we just want to say we’d done it.

“Our ship was going to be re-stationed to Oakland, California. They gave us a choice to stay in Seattle or go with the ship. I said, ‘Let’s go.’ I was in Los Angeles/San Pedro for most of the time. We patrolled Alaska during the summer. We were there to help and rescue people in trouble. We went to Dutch Harbor, which was the gateway to the Bering Sea.

“We went to Point Barrow, Alaska, where the great flyer Wiley Post had crashed a plane with Will Rogers his passenger. They were both killed. Going there was a big thrill for a young kid. Our ship, The Northland, was going there to carry a monument to the site of that crash. Big and heavy. Marble, probably.

“My three years were up. I’d always wanted to see New York, so I figured this was the time to do it. I took a train to New York, stayed at the YMCA, and saw the sights. Then I went to the recruiting office in New York and, surprise, there was my old warrant officer from Seattle. I re-signed for three more years. They sent me to San Juan, Puerto Rico. That was when the war started.

“I went on a ship doing convoy duty in the Caribbean from Port of Spain, Trinidad. That area was easy picking for the U-boats because we weren’t quite geared up yet. We escorted tankers and merchant ships.

“A typical convoy would be thirty to forty merchant ships. We’d have five escort ships. We had radar and sound equipment to detect the U-boats. If we detected one, we’d drop depth charges on them to try to drive them away or destroy them. Sometimes we didn’t really know if we got them. We never had one surface on us; that’s how you’d know if you got one.

“Once we had a new officer, a ‘90 day wonder’ as they were called—inexperienced and assigned to sea after only 90 days of training. After we had dropped depth charges on a suspected submarine, he saw bubbles coming to the surface. The officer got excited and yelled, ‘She’s a-sar-facing!’ Of course, it was just bubbles from the depth charge, not the submarine. We laughed behind his back.

“Then I got transferred to a different ship, running from New York to Guantanamo Bay, Cuba. I don’t remember being too scared. We just figured we’d get them before they got us. I was just a kid. We weren’t afraid. We had K-guns and all kinds of stuff to get a U-boat. I was a Bosun’s Mate, which was to take care of the deck and maintenance on the ship. On topside, we steered, signaled, and quarter-mastered. We ran the ship.

“I don’t think we got much news about what was going on in the war. We didn’t have TV or radio. But we had movies. They’d show a movie for recreation for the crew every night. I wasn’t much of a movie fan, so I don’t remember what the movies were.

“When Germany surrendered and the war was over in Europe, there was nothing left in the Atlantic for all the escort ships to do. They were laying up all the ships and thousands of people. I got sent to Oakland, California to work on a big attack transport, The Joseph P. Dickman. We were about to leave California to head into the South Pacific when the Japs surrendered.

“We went to Pearl Harbor several times. I saw The Arizona sunk in the ocean.

“The war was over, but there were tens of thousands of troops all over the world who needed to come home. My ship went to Honolulu, Pearl Harbor, and into the Philippines and picked up thousands of troops—as many as we had bunks for and could feed. It was a long trip back to the U.S. It took a long time, maybe ten days. On that ship we probably made fifteen-sixteen knots.

“We went across the Pacific to Tacoma, Washington and dropped the troops off. We left and went back to the South Pacific and got another load of soldiers. They’d made it through the war and they were going home.

“We tried to entertain them somewhat. On the forward deck a band would play and we had some singers. We unloaded that second load at San Francisco Bay. There was a big Army base there.

“When I left the ship they took the crew off and turned the ship over to the Navy yard. Then they sent everybody back to their home bases, and my registered base was Charleston, South Carolina. That suited me fine because my wife, Laurel, was in Jacksonville, Florida.”

John had served in both the Atlantic and Pacific during World War II.