When asked about his tour in Vietnam, Purvis James Boatwright, Jr. 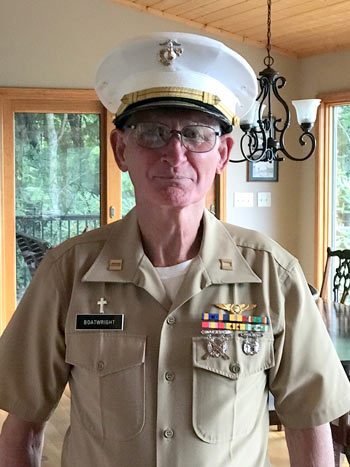 responds with a mixture of enthusiasm and regret. During the war, Boatwright was a Captain in the Marine Corps, serving as a Radar Intercept Operator (RIO) on the F-4 Phantom, a long-range supersonic interceptor aircraft and fighter bomber. His joy of flying conflicts with survivor’s guilt, a condition common among those who have served in combat.

A native of Orangeburg, SC, Boatwright graduated from the University of the South in Sewanee, TN in 1965. Knowing he would soon be drafted, Boatwright joined the U.S. Marine Corps. After attending Officers’ Candidate School and The Basic School at Quantico, he was offered the opportunity to attend flight school at Pensacola.

“I figured flying would be the lesser of two evils of being on the ground or in the air,” he said.

The Tigers Squadron
Boatwright arrived at Danang air base in 1967, a member of the VMFA 542 Tigers Squadron. Sitting behind the pilot as an RIO, his role was to help manage the battlefield and mission execution. In support of the Marines on the ground, most of the squadron’s missions provided close air support for Marine and Army units. The squadron also made night flights at 30,000 feet, dropping bombs as directed by ground control. During his year in Vietnam, Boatwright flew more than 100 missions, sometimes as many as three a day in good weather.

Boatwright’s primary tasks were navigation and communications. “Communications is very important because you can get messed up in a minute,” he explained. “It can get complicated with different parties trying to talk at the same time. You get so you can understand them all, ignoring what you don’t need to know.”

An accident on his first day in Vietnam proved instrumental in Boatwright’s flying experience. “We were drinking beer and wrestling and I broke my leg,” he said. “The brass did not think that was funny at all.” While recovering, Boatwright was assigned to a job in intelligence where he briefed and debriefed air crews. It was a good experience. “You got the inside scoop on what was happening on the ground and what happened to people when they flew.” This assignment offered Boatwright the chance to meet other officers and pilots – relationships that later enabled him to fly planes other than the F-4s.

“All the flights I flew in the F-4 Phantoms were with my squadron. And then I would approach pilots I knew through debriefing. I’d talk to the pilot and say ‘let me go with you sometime.’ And they would.”

Phantoms
According to Boatwright, the F-4 Phantom was the hottest airplane in the Marine Corps arsenal. “It was the crème de la crème of planes,” he said. The Phantom crews’ close-support missions sometimes made the difference between life and death for their fellow Marines. According to Boatwright, it was impersonal combat. “We talked to forward air controllers and they’d say ‘We’re going to throw smoke out and we want you to drop your bombs 100 yards north of that smoke.’ It was always in the middle of the jungle so we didn’t see anything except the trees. We weren’t eyeball to eyeball with the enemy.”

Skyhawks
Boatwright flew many missions in the TA-4 Skyhawk, a subsonic attack aircraft which performed both close air support and deep strike missions. While the A-4 is a single seat aircraft, the TA-4 (the “T” stands for training) is a two-seater, used in the US for training. In Vietnam the TA-4 was used for surveillance. “My job was to search for targets of opportunity,” he noted. We flew several hundred miles into North Vietnam and we were shot at a lot.” If the Skyhawk crew located a target, they would call in the Air Force to handle it. The Skyhawk was the plane John McCain was flying when he was shot down in North Vietnam.

“I had more fun in the TA-4 than anything else,” said Boatwright. “I hate using the word fun, but in retrospect, it was fun to fly those planes.”

Intruders
On one occasion, Boatwright flew a mission in an A-6 Intruder, an all-weather medium attack aircraft which is very efficient at subsonic speeds. “These were the planes that would drop the ordnance on Hanoi,” he said “They’d fly to North Vietnam at night, low level, in between the mountains, often suffering severe damage.”

The pilot that Boatwright flew with was highly skilled. “One morning, as we were waiting to take off, we watched as his plane returned from a mission. They’d been all shot up,” Boatwright said. “They only had one main gear and the nose gear down, a wing was partially shot off, and the tail was partially shot off. The ground crew had foamed the first 200 yards of the runway and the A-6 had to catch a wire or they could have crashed and burned. They caught the wire and jumped out. The pilot got the Silver Star for that. It was incredible watching them come in. That shows how good those pilots are.”

Returning Home
Returning to the states, Boatwright encountered recriminations and hostility. “I was in uniform when I got to Columbia, SC. The taxi driver would not take me home, so I had to walk. I had one friend whose brother kicked me out of his house.”

He also suffered from survivor’s guilt. “You’d be flying and someone would come up on the radio, a helicopter crew had gone down, and they’d be shouting ‘Mayday, Mayday,’ and then there was silence. You knew they’d probably been killed. That happened a lot.” Boatwright also had several friends who were killed.
He continued, “I also felt guilty because our living conditions were relatively luxurious compared to the Marines in the field. We had hot meals every day, showers (albeit cold showers), and we lived in air conditioned huts, whereas the grunts were hot and filthy, eating c-rats and getting shot at.”
Boatwright returned to the states and served as an S-2 Intelligence Officer at Beaufort, SC. After leaving the service in May 1970, he attended the University of Georgia and went on to veterinary school. In 1998 he sold his practice and moved back to Brevard. Today he lives on See Off Mountain on land purchased by his grandmamma in the late 1800’s. He assists the Humane Society and is a member of the Transylvania County Honor Guard.
Boatwright is proud to have served his country, but he regrets our intervention in Vietnam. “Why didn’t we listen to the French?” he asked. “It made me so angry — if you’re fighting a war, you should fight it to win. Vietnam was a political war.”
As to his military service, there are no regrets. “I’ve been to college and to veterinary school. But I’m more proud of being a Marine than anything else. I have nothing but praise for the Marine Corps. And that’s why I’m doing this article. It lets me be a Marine again.”