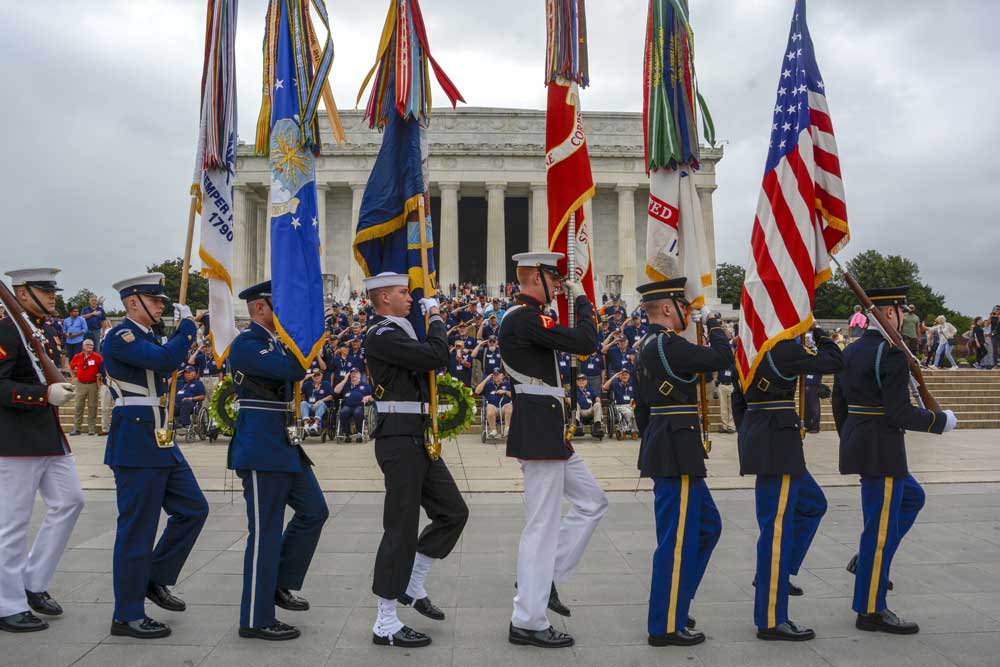 Article first appeared in The Transylvania Times on October 22, 2018

In 1961, President Kennedy described the counterinsurgency in Vietnam as “another type of war, new in its intensity, ancient in its origin…. requiring a wholly different kind of military training.” At that time, travelling from the Philippines to the Bay of Siam (now the Bay of Thailand), twenty-year old Marine Corporal David Crandal, like most Americans, had never heard of Vietnam.

Crandal enlisted in the Marines in 1959. After boot camp in San Diego, he was sent to Camp Pendleton for Infantry training and then back to San Diego for Communications School. He was shipped to Okinawa and, shortly thereafter, to Japan’s Mt. Fuji for cold weather training. “I’m not sure how long I was there,” he chuckled, “but it was long enough to know that I didn’t like it.”

After returning to Okinawa, Crandal spent much of his time on daily military maneuvers as a member of the Artillery Battalion of the 3rd Marine Division, 12th Marines. At night, the Marines enjoyed “Cinderella Liberty,” so-named because troops had to be back on base by midnight.

“One day, we returned from maneuvers at 3 p.m. and were told there would be no liberty that night. We were instructed to pack our field transport packs and put everything else into our sea bags, which we might never see again. There was an enormous amount of ammunition and artillery in numerous bunkers,” he explained. “We spent 24 hours a day for four days carrying heavy ammunition cases from the bunkers to ships.” The Marines were flown to the Philippines and eventually Crandal found himself on a Marine helicopter carrier bound for the Bay of Siam.

During his service off the coast of Thailand, Crandal had two occupational specialties (MOS). Aboard the Marine Corps’ only helicopter carrier, he trained Marines in radio communications, maps and coordinates. The primary task of the carrier was to take on damaged helicopters, replacing them with reconditioned choppers. “One day I was on deck when an approaching helicopter dropped straight down into the water just as it reached the ship,” Crandal said. “Immediately lots of little sampans rowed out from every direction to rescue the pilots. It looked like a wagon wheel with spokes. The pilots were saved, but they were really shaken up. Many of the helicopters we got had been patched up in the field with duct tape. At this time, we were supposedly just ‘advisors’ in Vietnam; but people were being killed and these helicopters all had holes in them.”

Crandal’s second MOS was as an artillery Forward Observer for Communications with Naval Gunfire. To respond quickly to a situation, the military devised Battalion Landing Teams. The teams were comprised of specialists from different companies who were versed in radio communications, Morse code, artillery observation and spotting. These versatile teams were called in as reinforcement when the Navy needed to get things done quickly. As a forward observer, Crandal went ashore and directed the ship’s gunners to specific targets, giving them the coordinates and then correcting fire after observing where the artillery hit. During his two years overseas, he served on 11 different ships.

Crandal returned to San Francisco from Southeast Asia by ship in 1962. He did not encounter demonstrators, since most of the country was still unaware of any U.S. military action in Vietnam. However, his was not a joyous return. “We got off the ship and there was nobody there, except for a few parents,” he recalled. “My parents were 3,000 miles away. It was not much of a homecoming.”

Saturday’s excursion held special significance for Miller. “This was our first official flight of Vietnam War veterans,” he said. “For all of us at Blue Ridge Honor Flight, it was special knowing the appalling treatment these veterans received when they returned from Vietnam.” The veterans were accompanied by volunteer guardians, Honor Flight staff members, and a support team of medical personnel.

Unfortunately, the departure was delayed for more than three hours due to fog, and several stops in D.C. had to be omitted; however, every cloud has its silver lining. Clark Murray, of Brevard, viewed the delay as a blessing. “It enabled me to talk to the other veterans,” Murray said. “It was very interesting to hear their experiences. We didn’t get into the politics of the war. It was where you were, what you did, your rank, observations as you were serving there, the weather – hot, cold, humid – the mosquitos and the rats. I hadn’t really talked to anyone much about my experience in Vietnam for more than 40 years. The time with my fellow veterans was a healing experience.”

When the American Airlines flight finally landed at Ronald Reagan Washington National Airport, the veterans encountered enthusiastic, cheering crowds as they filed off the plane into the terminal. “I said to myself, ‘Wow, what’s going on here?’” said Crandal. “It was so unexpected!” Murray added, “it was a serendipity moment. What a great way to start the day!”

Other highlights included a “water salute” by fire trucks at both Reagan and Asheville airports; a police escort with sirens by officers who had volunteered their time (the four buses did not stop for a red light throughout the day); a unique ceremony at the Lincoln Memorial where an Army general and an honor guard thanked the veterans; and a visit from WWII veteran, 95-year-old Senator Robert Dole who personally greets as many honor flights as possible.

But top of the list of memorable moments was the visit to the Vietnam Veterans Memorial, or “the Wall.” The experience moved many veterans and guardians to tears as the group slowly walked along the black granite wall bearing the names of the 58,000 American men and women who died in the Vietnam war.

“I had never been there,” said Crandal. “What strikes you the first time you see it is that it’s huge, with so many names. I was surprised that the first casualties listed were in 1959.”

Murray had visited the wall twice before the Honor Flight excursion. “The first time I just bawled,” he remembered. “This time was a very meaningful experience – knowing that everyone around me had served in Vietnam. I thought about all those families devastated by the death of their loved ones.” As Vietnam War veteran Larry Moore gazed somberly at the Wall, he commented to his guardian, “They left as idealistic young men and women, and they returned as cargo.” It was, indeed, a sober and emotional experience for veterans, guardians and Honor Flight support staff.

While nobody greeted David Crandal when he returned to San Francisco in 1962, seven years later Clark Murray’s experience in Seattle was the opposite. “We noticed a large, noisy crowd as we came down the exit,” he commented. “We thought they were cheering, welcoming us home. Instead, they were screaming and jeering. We had no idea of the intensity and magnitude of the protests going on at that time. It was a confined area, so close that I was spit on several times. We were in shock. We thought, why are they angry? We’re home, this is a time of rejoicing!”

Fifty years later, on the evening of October 6, 2018, Crandal, Murray, and 90 other Vietnam veterans finally had their moment of rejoicing as they returned to the Asheville Regional Airport. Jeff Miller, Honor Flight founder and ardent supporter of all veterans, described this long-awaited homecoming: “Bands, bagpipes and drums, Honor Guard, and throngs of thankful family, friends and admirers waving flags, holding up signs, shaking hands and yelling ‘thank you for your service’ greeted them as they made their way through. This time there were tears of joy and smiles on the faces of those who never had the welcome home they so deserved.”