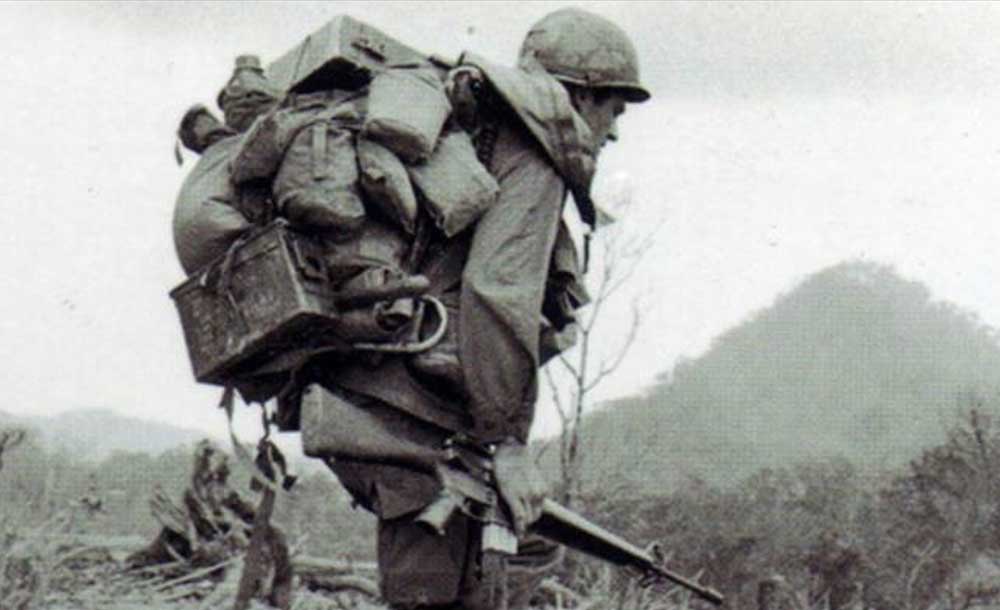 Captain Ervin Bridges spent much of his time in Vietnam struggling through jungles and rice paddies. Bridges remembered lying on the ground during a particularly bloody battle wondering to himself, “What the heck am I doing here? Why did I volunteer?”

A native of Raleigh, NC, Bridges celebrated his 21st birthday on February 25, 1966 and enlisted in the Army the next day. “I’d wanted to be in the Army since I was six years old,” he said. “My dad was in WWII and I felt it was my obligation to go into the service.” Bridges attended Officer Candidate School (OCS) and was commissioned as a second lieutenant on March 7, 1967.

“A lot of guys fresh out of OCS thought they knew it all,” remembered Bridges. “I knew from talking to my dad that I should listen to my sergeants and other seasoned NCO’s. That was my mindset and it served me well.”

Light Infantry Brigade
Bridges prepared for the harsh terrain of Vietnam at Jungle Operations Training School in Panama. In mid-October 1967 he was sent to Vietnam, attached to the 199th Light Infantry Brigade, based near Saigon. However, upon his arrival, he was reassigned to the 196th Light Infantry Brigade, 4th Battalion, 31st Infantry Regiment in I Corps, the northernmost provinces in South Vietnam.
As a platoon leader, Bridges originally oversaw the team’s primary mission, protecting fire support bases (FSBs). Later he was responsible for search and destroy missions as a foot soldier.
Walking to War
In Vietnam, Light Infantry Brigades were units of soldiers with no attached tanks or armored personnel carriers. Once the troops were transported to a specific location, “they tended to walk to war, rather than to ride to it.”

“During search and destroy missions, every five or six days, a helicopter would bring us a change of clothing, more ammo, mail and c-rats. Each man would receive 15 meals (3 a day), but that weighed more than 25 pounds, a lot of weight for an infantryman. So we’d break it down to just one meal a day. A day’s worth of food was 3 cookies, hot chocolate, a can of fruit, a can of meat and a can of bread or crackers. We were always hungry. Often we weren’t looking for the enemy as much as looking for food.”

“You’d carry enough junk so that sometimes when you got tired, you’d put your pack down and slide in it and crawl on your hands and knees,” Bridges said. “We weighed it out one time and we carried 100 pounds of equipment, sometimes running.” According to Bridges, his platoon averaged about 10 miles a day, depending on the mission.

Bridges recalled one occasion during the Tet Offensive in 1968. “We were moved north to Camp Evans and were attached to the First Cav. Our mission was to support the Marines. They had tried to cut off the enemy’s supplies going into Hue and we had to get to them in 3 days. For three days we moved night and day, 100 miles total. We didn’t wear socks because of trench foot and we took our boots off at least twice a day to powder our feet. We slept in our boots so we could move quickly if we were hit at night.”
“We were doing a lot of night ambushes and combat sweeps every day, walking through mine country and taking occasional casualties. One night, we were called back in by our company commander, who told us we had to get to a designated point by daybreak. He put as at a jog throughout the night. We’d run 50 feet, walk 50 feet, run 50 feet, walk 50 feet.

At daybreak Bridges platoon was transported by helicopter to a mountain in the A Shau Valley, a narrow, 25-mile long arm of the Ho Chi Minh Trail, which funneled troops and supplies toward Hue and Danang. “We became involved in something later called the Battle of the Ridges,” he said.

A light infantry platoon from B Company had been sent in to rescue an LRRP team (long-range reconnaissance patrol) of seven men who were under fire and fighting for their lives. Bridges’ A Company platoon was to support the now-besieged B Company platoon. His team was dropped into scrub brush on the side of the mountain.

“We moved up and as soon as we got to the crest of the hill, all hell broke loose. The LRRP commander had survived, but the other six men had been killed. There were 3 bodies left behind and our job was to get them. We got the bodies out under fire and started filtering out the wounded to the bottom of the hill.”

“We went up and down that hill four times that day and night. We often wondered whether or not we’d make it,” Bridges remembered. “We just decided, ‘Well, this is our job.’ We just sucked it up. We were there for three days. We started with 40 men and I had 17 left at the end.”
Home and Back Again
Bridges returned to the United States in October, 1968. “I couldn’t talk about my tour when I got home, but I was able to talk to my best friend who was home from the Peace Corps. One day I went to visit him at his house. His mother answered the door and called to him, ‘Harold, that baby killer is here.’ I never went back in that house. I actually had friends who turned their backs on me. So I stayed in the military.”

At Fort Bragg, Bridges trained troops and was promoted to Captain. Shortly after that, he was sent back to Vietnam. “On my second tour, I was team commander for MAT (Military Assistance Team), stationed in Hoi An near the South China Sea. Every time we went out, we made enemy contact. I was there for 4 ½ months, until I was wounded.

Wounded in Action
Bridges earned his Purple Heart on November 1, 1970 when he stepped on a land mine. Fortunately, he was thigh-deep in water, which saved his life. “It crushed the heel of my right foot and broke my ankle in 9 places,” he stated. Despite an approaching typhoon, Bridges was carried out by a squad of Marines and put on a Boston Whaler. “I debriefed my province commander that night. But I’d suffered a concussion and had an embolism which put me into a coma. I woke up 10 days later on the USS Sanctuary on the South China Sea.” Bridges spent 12 days in Japan where they stabilized his fever from an infection in his foot. He was flown home to Fort Bragg where they cut open his foot. “It was the size of a basketball, and green,” he said. “But they were able to save my foot.”

Still Serving After All These Years
Bridges was retired out of the military on disability, having served 5 ½ years in the Army. He married Kathy Stone, his cousin’s friend who had written to him while he was in Vietnam and visited him while he was recovering from his injury. “She’s a great person,” he commented. “She’s as sassy as can be. In fact, that’s her nickname. She probably saved my life.”

Bridges became a loan officer and eventually moved to Brevard where he worked at First Citizen’s Bank. Today, he and Kathy are retired and enjoy the tranquility of their mountain home near Bass Lake in Cedar Mountain. Bridges continues to serve his country and his community as a member of the Transylvania County Honor Guard and a volunteer fireman for the Little River Fire District.

At the end of the interview, Bridges reflected on his time in Vietnam. “There’s something I experienced over and over again, and that was the caliber of the men over there. There were a lot of good soldiers — draftees, enlisted men, and officers. I can’t say enough about them. They always had our backs. That’s one thing I’ve never forgotten. If I can’t say anything else about my tours, I respected the people I worked with over there and I respected the job they did.”

Article ran in The Transylvania Times on June 18, 2018